DJ Delamar: Why she decided to leave her ‘longest summer job ever’ | Inquirer Lifestyle ❮ ❯ 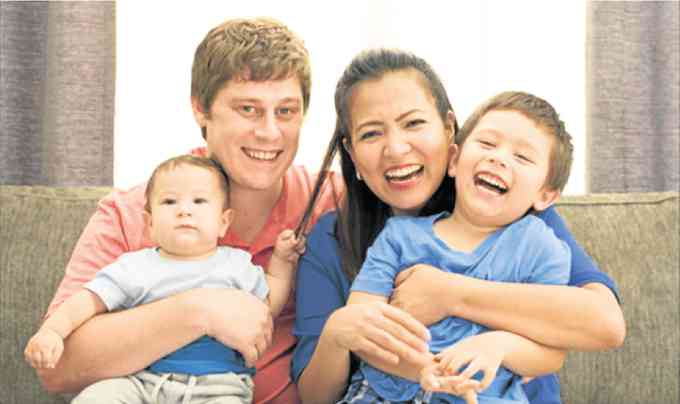 DJ Delamar: Why she decided to leave her ‘longest summer job ever’

“This morning, before we met up, I was at home in bed playing with my two boys,” gushes Delamar Arias. “And I thought to myself, what a life. I really have to enjoy this!”

It’s a treat that has become more real only after Delamar—half of Chico and Delamar, the phenomenal tandem behind one of the longest-running shows on FM radio, RX 93.1’s “The Morning Rush (TMR) with Chico and Delamar”—recently retired from radio.

“It really is one of the hardest decisions I’ve made in my life,” she tweeted last July 22, after announcing on air that July 29 would be the last day on board for one of the most recognizable voices on the FM band.

Delamar, long known as the smart, sensible foil to the wacky Chico Garcia, ended a stellar stint shortly after celebrating the show’s 20th anniversary. She bid goodbye on air alongside her sparring partner Chico and the team’s latest member, Gino Quillamor, who joined TMR in 2011.

“Actually, people assumed that I left because of my family,” says the petite Delamar, who shows up for this interview in sneakers and a T-shirt, and relishes the low-key celebrity that has given her thousands of fans—one even wrote a heartbroken poem on her retirement—yet still allows her to walk around, relatively anonymous. “You’re not an artista na dinudumog.”

Although she is now wife to American BPO industry executive Tyler Ashby and mom to adorable boys Cooper, 5, and Parker, 10 months, it was more than domestication on Delamar’s mind when she finally decided to move on.

It didn’t help that she is turning 43 (despite looking much younger)—not exactly RX’s target audience. “When I was young and not married, I represented the market—I partied all night, drank, hung out with friends. But imagine a wife and mom talking to that market now. So I decided it was time to take myself somewhere else.”

Delamar was not comfortable reining such mommy thoughts in, too. “I’ve always talked about what I know. The show is so talk-heavy, you have to speak from your own experience. I have concerns about children, and being a wife. But I knew not to push it.”

The outcry from fans and listeners—several generations’ worth of them—was tremendous. Many of them had grown up with Chico and Delamar. They probably thought they would be hearing her voice forever.

“But you do change as you grow older,” she muses.

Delamar was a third year history major—her pre-law course, as hers is a family of lawyers—at the University of the Philippines when she started as a student jock on 97.1 LS FM. After the summer stint, she was offered a job, but it was a flat-out no for her dad.

After graduation in October 1995, Delamar had sent out her resumé—“and I was waiting for companies to call, but they never did,” she says with a laugh—when she learned of an opening in RX for a newscaster, a temporary summer job.

The job included writing the script for online banter after the newscast, but she was hesitant to write for someone she didn’t know very well—in this case, a DJ named Chico Garcia.

She also overheard Chico telling someone that her scripts were “boring.” “Ah, gan’on?” she thought to herself.

So Delamar typed out a script that had Chico ad-libbing his way through their one-minute exchange-cum-argument—which soon stretched out to five minutes, and had advertisers calling RX to ask, “Who are those two in the morning?”

“So our president sat us down and said, ‘You guys are boarding, and you have to have a gimmick on your show that isn’t happening anywhere else,” Delamar recounts.

In no time, “The Morning Rush with Chico and Delamar” had developed a cult following, thanks to the undeniable chemistry between the two jocks.

“It opened up a conversation,” she recalls. “I wasn’t just the chuwari-wop girl, because I had 50 percent of the show—and, as I liked to joke, it became the longest summer job ever for me!”

It helped that Delamar took her job quite seriously. “RX training at the time was very strict. Radio was not a visual medium, so you have to sound good, be good, and write well.”

In the early days, feedback meant getting phone calls from listeners; by the ’90s, however, the Internet, then pagers, and later text messages and social media helped the show explode, and opened up radio in unprecedented ways.

“With the advent of social media, DJs now are also seen and not just heard,” Delamar says. “Looks play a big part now; when I came in, it didn’t matter. Nobody hired me to be a sex symbol. Chico and I would ask ourselves, if we auditioned in this day, do you think we would we have made it? I doubt it!”

By the ’90s as well, the radio duo had become great friends, and to this day, fans who wish the two ended up together haven’t given up hope, she reveals with a big laugh.

The ever-candid Delamar lived out her pregnancies on radio; she was actually on the phone with Chico, talking about her epidural, when she was in labor with Cooper in 2011.

When she got pregnant, still unmarried, she asked permission from the station—“not to have sex,” she quips, “but to talk about it. I knew I had developed a relationship with listeners, and they deserved to know this about me. I didn’t want to lie, even if they turned their backs on me. I wanted it to come from me—to control the narrative. I wanted to tell people, I’m human! I am not a role model!”

The duo made a big deal of it, building up to “The Great Reveal” of Delamar’s announcement, and even making an iconic Top 10 list—one of the show’s hallmarks—out of people’s guesses.

“The most popular guess was that Chico and I were joining ‘The Amazing Race,’” she remembers. “But I remember we were holding hands before I made the announcement, because I had to face the music—baka wala na akong trabaho!”

Fans were overwhelmingly supportive, of course, just as they were during one of the most difficult times in Delamar’s life: the loss of her newborn baby daughter Eva after 27 days in the neonatal intensive care unit in 2013, a period she describes succinctly as “hell.”

She was gone from radio for only two weeks. “People thought I would take longer, but the medical bills were so tremendous, I was panicking.”

To this day, even after her retirement, Delamar is in awe of how much of an effect the show had on people.

“It all came out during the anniversary, what we mean to them,” she says. “OFWs, people who are depressed, have terminal disease, or had a death in the family—they look at the show as a reprieve from the suffering, or a way to touch base when missing the Philippines. It’s heartwarming.”

In fact, although she’s enjoying family life and her earnest attempts at cooking for her boys, she will miss the on-air laughter the most, Delamar admits.

“You know what’s the hardest thing to fake on air? Laughter. People can tell. Chico and I have been there. We’ve done the show through death, terminal disease, break-ups. People respond to the realness you exhibit. At the end of the day, when you’re real, you can’t be more or less than what you are. So be real.”

It’s the same advice she offers to any aspiring young female radio jocks who fancy themselves the next Delamar.

“I approached radio trying to understand the world and myself—why is love hard, why is dating this hard, why can’t parents understand us. You reveal yourself through your questions. When you reveal who you are, people feel connected.”

The fact that today’s jocks are seen as much as they are heard, thanks to social media, is both good and bad, she notes. “It’s good because this is who you are, how you look. You can show yourself in another light. The bad thing is, for a generation that’s so into a selfie culture, consumed by how they are perceived, the agenda is getting ‘likes.’ Why not be who you are?”

Delamar is also certain radio will continue to have its place in the world. “They’ve been foretelling its demise for so long, but they forget how inexpensive radio is. Anybody from a far-flung area can have a radio. There’s a radio in every car, and everyone is listening in the traffic.”

In terms of what’s next, she has no clear plans; she’s still getting used to introducing herself as Delamar, and not the co-host of TMR, during hosting gigs.

But Delamar is also putting it out there: “I want to do a talk show. That’s my heart’s desire—I want to talk about things that I don’t understand or do understand. I think I can learn it, and I think I can be good at it.”

If anybody can do it, Delamar can—for real.