4 days with Alexandra Cousteau, mother/wife/explorer and an heir to a name | Inquirer Lifestyle ❮ ❯ 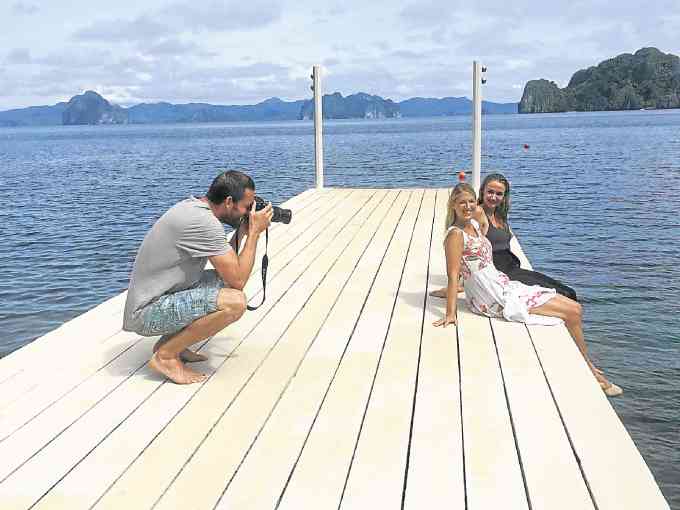 4 days with Alexandra Cousteau, mother/wife/explorer and an heir to a name

But papa, you can’t eat the fish,” exclaims five-year-old Clémentine. “That’s who we’re trying to save!”

It sounds like a regular little girl’s protest, except that, in this case, it’s coming from an infinitely more informed place.

After all, the kids’ mama, Neumeyer’s wife, is Alexandra Cousteau, filmmaker, explorer, senior adviser to the international conservation organization Oceana, granddaughter of legendary explorer Jacques-Yves Cousteau, and a renowned champion of the environment. And no, she doesn’t eat fish.

In an earlier interview with Inquirer Lifestyle, Cousteau stated that, in this day and age, “Eating a tuna is like eating a tiger”—because tuna fisheries are being decimated as swiftly and dangerously as the charismatic big cat.

“I don’t mean to sound alarmist, but I am alarmed,” notes Cousteau.

It’s been, for her, an exhausting 10 days in early September in the Philippines, hopping from Manila to Dumaguete, Cebu, and now Palawan as guest of Oceana Philippines, giving a face to the organization’s fisheries-focused campaigns.

‘Love of my grandfather’s life’

We spend four days with her at El Nido, diving and talking about her work.

Today, however, other than shooting scenes for Oceana Philippines’ public service announcements, as well as for a short film for Oceana International, Cousteau can take it slower. It’s one of the family’s rare trips together, and she and Neumeyer have been able to scuba dive together and play with the kids.

Cousteau is tall, elegant, and extremely articulate when talking of her passion.     The accent is American; her mother Janice Sullivan was a model originally from Los Angeles when she met Philippe Cousteau, himself an explorer and constant companion of his father Jacques on explorations on board their famous boat, the Calypso—which, incidentally, came to the Philippines in 1990, along with its famous captain.

“He was the love of my grandfather’s life,” Cousteau says. “He was never quite the same after that.”

“I’m not a marine biologist, and nor was my grandfather, although everyone thinks he was,” she says. “I thought political science was a very interesting, analytical degree.”

Still, when she calls her precocious, water-loving daughter’s name with a marked French accent—“CLAY-muhn-teen!”—it’s the Cousteau romance all over again. Unless, of course, she and Neumeyer are calling her “Monkey,” and the gurgling Balthasar, simply “Fatty Pants.”

Cousteau and Neumeyer met in Paris, and have been married five years. “Our first date was the premiere of the film ‘Oceans’ by Jacques Perrin, and he loved it,” she says with a laugh. “I thought it was a good sign.”

Neumeyer is a self-confessed “city slicker” with a wry, self-deprecating humor. “Why are all the white people on this side of the table?” he hollers over dinner.

He practices green architecture, mostly for private clients, having given up office life a while back to have his own time. He’s also a jock, going straight from a dive—in his wetsuit

—to the basketball court to dribble around with the El Nido staff.

Also, he’s so comfortable being Cousteau’s husband, he’s even starting an Instagram account called “Married to An Explorer.”

“I’m the beneficiary of all this,” he says, stretching his arms out. “She changed me!”

“Not every guy would be willing to be married to somebody with a name, or be Mr. Cousteau, but he’s secure enough,” Cousteau says. “I’ve been brainwashing him. He’s a very nurturing father, though. We’re 50-50 in parenting. Just because I’m the woman doesn’t mean I’m going to be 100 percent.”

Indeed, on the flight home from El Nido, when Balthasar wails for the first time since I meet him, it’s Neumeyer who rocks the baby to sleep, father and son hiding under a blanket.

Which brings us to the family name. “Yes, there were expectations, but there were also opportunities,” Cousteau says. “It wasn’t a silver spoon, but it was an opportunity to be part of something if I wanted to be.”

She’s not much of a celebrity, Cousteau notes: “I walk down the street and people don’t recognize me. I have a lot of privacy, and I protect and guard my privacy. But I can step into the issues with a certain amount of celebrity when I choose to, and when I think it can make a difference. I can pull that card when it can help issues. Otherwise I’m happy being a mom, and being at home working on stuff.”

Ironic, though, that she’s getting her hands dirty in ways her grandfather never did. “Well, we have to be in the nitty-gritty, in a way we weren’t 20 years ago. When my grandfather was born, there were one billion people on earth. Now there’s seven billion, in the span of a hundred years. It’s insane. In the Philippines, it’s gone from 10 to 110 million people. And everyone wants to live like Americans! Even Americans shouldn’t be living the way they do!” she says with a hearty laugh.

“Maybe it’s because I know too much, as I’m friends with too many scientists looking at the trends, not just tree-huggers who live in the forest,” says Cousteau of her alarm.

“Once in a while I will have some meat, maybe once every month, if I know where it came from. It’s a moral choice because it has such an impact. Eating meat at every meal is a luxury that will damage the world,” she says.

She walks the talk at home, as well, using nontoxic, organic personal care and home products. Her idea of relaxing is just being in nature with her children, Cousteau admits.

“When Clémentine comes home from school and she’s all dirty from playing, I ask, ‘Did you have a good day at school?’ She says, ‘Mama, look at me. Of course I had a good day.’”

Motherhood has certainly colored the way she now sees her mission: “My emotional investment is deeper. I am willing to invest my life so that my children’s lives are abundant.”

She gazes at Clémentine, engrossed in a colorful book of tropical fish. “I don’t want the story of their lives to be the disappearance of all the things that we love. I want her to participate in bringing it back if she chooses to. I want her to live with the expectation that it will get better, not the dread that it will get worse.”

Alexandra Cousteau looks out to the ocean, and I can only imagine what she sees. “I have to live with that expectation, too,” she says.