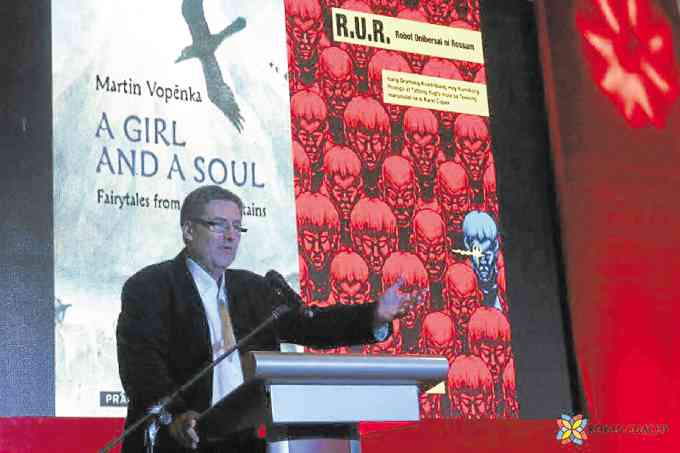 But your fourth language really made me curious when the Czech ambassador launched two books with their covers on a giant screen.

It felt like traveling from time zone to zone on the wings of language—first “A Girl and a Soul,” a book of modern Czech fairy tales in English; then that clever play “R.U.R.”—Rossum’s Universal Robot—with robots talking philosophy in Tagalog onstage.

“I’m a person interested in literature,” Czech Ambassador Jaroslav Olša Jr. said right off. This is a “unique moment,” he added.

“Why? Because Philippine literature is blossoming?” I asked.

“Blossoming is the right term,” he said. “The Philippines is not ‘only’ an Anglophone country but with a significant literary life in other languages—so many new and aspiring writers!”

Oh, wow. This man sounds like a perfect fit in our literary scene that’s been popping for three decades now. His years in publishing before joining the diplomatic corps really show. From Europe’s multilingual reality, Olša recognized our own rich island languages and cultures right away. Besides, there already was an anthology of Philippine short stories translated to Czech 15 years ago.

Mr. Ambassador, a science fiction writer himself, arrived in Manila in mid-2014 from his previous post in South Korea. He wasted no time. Next thing you know, he himself was already choosing Philippine literary classics and new work in English, Spanish, Chinese and Tagalog for a new Philippine anthology for the Czech literary monthly “Plav.”

Of course, poems had to be there, too—Jose Rizal, Rio Alma, Joel M. Toledo and Enrique Villasis, plus “exotics” like Go Bon Juan and Grace Hsieh-Hsing Lee’s poetry in Chinese!

The first Czech classic published by the KWF in 2015 was “Sa Prága: Mga Piling Tula ni Jaroslav Seifert,” 300 pages of the best poems by the 1984 Nobel Prize winner Seifert.

Between Seifert’s lines are 60 years of writing by a left-wing intellectual, a former member of the Communist Party in his youth. Turning opponent of the post-World War II Soviet communist regime brought him surveillance by the secret police and censorship of his books, of course. Tyranny is a universal language, too.

Filipinos can now relive Seifert’s life recounted by this poet of transcendent courage familiar to us in Pablo Neruda and our own Amado Hernandez. Seifert, the most widely translated Czech poet today, is read in most European languages, as well as Japanese, Chinese, Korean, Vietnamese and Hindi.

This Tagalog version is the sixth Asian language for human experience passing from heart to heart in poems that outlive tyranny.

His thought was inevitable— young Guelan Luarca’s Tagalog translation “should remain present in the Philippines,” so Mr. Ambassador proposed to finance the printing of “R.U.R.” in Tagalog.

That translation was what they launched at the book fair with two onstage scenes from the Tanghalan play. Nearly 20 years had passed since artistic director Glenn Sevilla Mas “was so impressed with what the play had to say about the world we live in, when I saw it performed at the Philippine High School for the Arts in Mt. Makiling.”

This Czech-Filipino connection continued traveling—from poetry to play to novel. By February came the Manila launch of the Tagalog translation of another Czech classic, Franz Kafka’s seminal novel “The Metamorphosis,” whose traveling salesman transforms into a giant vermin bug. “Kafkaesque” has long been a byword for the surreal to Filipino readers.

More Filipinos could now read this master of the surreal in the national language in their new surreal political season. Kafka’s life was the original Kafkaesque world, the only boy growing up under the thumb of a tyrannical father. Franz lost his two younger brothers to death in infancy before he was even six.

After he died of tuberculosis at 40 in 1921, he did not have to suffer his three sisters’ death in Nazi camps and a Polish ghetto, but he knew enough of savage masculinity in their own childhood home.

Strangely, extreme suffering under patriarchal cruelty sheds light on opposite ends of the world from pain from powerful literary beauty like a talisman. Kafka’s sense of the unreal in so-called reality could be just the right reading in Manila’s traffic gridlock, rising floods and random killings in an ongoing Philippine “war on drugs.”

Then it was time for Ambassador Olša to take Kafka to the Land of the Ibalon last February in Ateneo de Naga. Bicolanos rallied to their entry into the halls of world literature with Kafka in Bicolano. The VC Igarta Foundation gave a grant for translation through the eminent Bicol poet Luis Cabalquinto, as did the church-based Ina nin Bicol Foundation “to promote cultural literacy and spiritual maturity among Bicolanos.”

“All of Kafka’s works became part of world literary heritage, one of the most prominent names among writers of so-called German literature of Prague,” Olša said at the launch of “An Pagkagimata ni Gregor Samsa” (“The Awakening of Gregor Samsa”).

“This story of Gregor Samsa has allowed our local languages to metamorphose into a language that can awaken us from our darkest nights, our deepest slumber,”       translator Kristian Sendon Cordero solemnly declared at the launch eight decades after its author Kafka’s death.

This voyage with the world spirit ends now in “A Girl and a Soul” with fairy tales in a world that badly needs it now. Author Martin Vopenka gently reminds us how lightly we must tread on our planet’s increasingly fragile state.

“Does Vopenka live in the wild?” I asked Ambassador Olša. “No, he lives in Prague,” he said. “He grew up there with his late father, a famous Czech mathematician. Martin never lived in nature, but knows it well. He was part of our Antarctic expedition some years ago. He’s a mountaineer, often trekking in the mountains. Right now he’s coming down from this summit of Mt. Isarog in Bicol.”

That Czech soul I met in unforgettable Prague, the seat of the old Kingdom of Bohemia’s alchemy, was back, resonating more widely in our receptive Philippines. From surrealist to science philosopher to romantic revolutionary poet, Czech suffering is deep, its surprises ceaseless—just like ours. Thank you, world spirit!