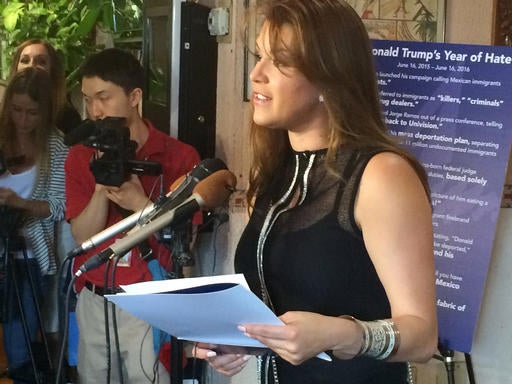 A Miss Universe insulted by Trump steps up for Clinton

WASHINGTON— Alicia Machado says that when she gained weight after being crowned Miss Universe for 1996, Donald Trump labeled her with a sexist nickname — “Miss Piggy” — that caused her shame and humiliation.

Two decades later, Machado’s dealings with Trump, her one-time beauty pageant boss, are reverberating through the 2016 campaign as the Republican businessman and reality TV star seeks the White House.

Democratic rival Hillary Clinton told Machado’s story toward the end of Monday’s first presidential debate, scolding Trump for referring to the Venezuelan-born actress as “Miss Housekeeping,” as Clinton said, “because she was Latina.”

“Donald, she has a name,” Clinton said, prompting Trump to ask, “Where did you find this?”

Clinton said, “Her name is Alicia Machado and she has become a U.S. citizen, and you can bet she’s going to vote this November.”

Asked about the exchange during an interview Tuesday with “Fox and Friends,” Trump said Machado was “the worst we ever had,” adding: “She gained a massive amount of weight. It was a real problem. We had a real problem.”

“I love this country,” Machado said. “I don’t want to have some misogynist president.”

Clinton’s embrace of Machado brought comparisons to her campaign’s defense of Khizr Khan, whose son was killed while protecting other U.S. soldiers in Iraq. Khan spoke at the Democratic National Convention, holding up a copy of the U.S. Constitution while accusing Trump of smearing the character of Muslims.

Clinton’s campaign is trying to mobilize Latinos and women in November’s election and has assailed Trump for derogatory comments about women in the past. It quickly released a web video detailing Machado’s story, portraying her as a mortified pageant winner whom Trump called “fat” or “ugly” and blindsided by inviting reporters to watch her work out.

Machado went on a diet in 1997 after saying she gained at least 15 pounds. Trump said during Machado’s workout in front of the media that year that “she likes to eat — like all of us” and supported her weight-loss efforts.

She was embroiled in controversy of a different sort one year later, after a judge in Venezuela accused her of threatening to kill him after he indicted her then-boyfriend for attempted murder. The boyfriend, Juan Rafael Rodriguez Regetti, was accused of shooting and wounding his sister’s husband, whom he blamed for his sister’s suicide. The victim’s family accused Machado of driving her boyfriend’s getaway car, but she denied any involvement and apparently was never indicted, due to lack of evidence.

Now a U.S. citizen, Machado told reporters Tuesday in a conference call arranged by the Clinton campaign that her experience with Trump could “open eyes” in the presidential election. She said she was “really surprised” to hear Clinton refer to her story during the debate — she said she was overcome with emotion and started crying — but wanted to help Clinton in the election.

After the debate, Machado tweeted her thanks to Clinton, writing in Spanish: “Thanks Mrs. Hillary Clinton. Your respect for women and our differences makes you great. I’m with you.”

In June, Machado appeared at a news conference in Virginia held by immigrant advocacy groups to encourage Latino voters to support Clinton.

“I want to keep working on my campaigns for women’s equality, for respect for women and that our physical appearances do not define us productive or intelligent beings,” Machado told reporters in Spanish. “We are more than what we look like physically, that’s my point.”