‘Ayi’ would have been 100 | Inquirer Lifestyle ❮ ❯ 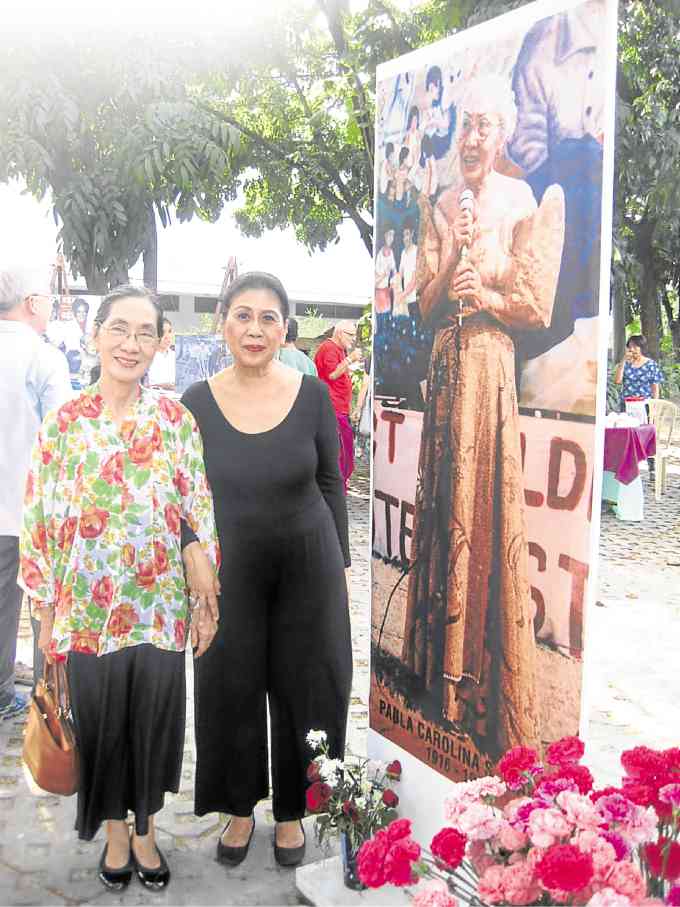 She was daughter, sibling, watchful older sis to six younger sisters also carrying the first name of Paula, wife, mother and friend to legions that cut across generations.

Together with husband Armando (Lolo Mando), the activist Paula Carolina  Malay has the distinction of having her name carved on the wall of the Bantayog ng mga Bayani in Quezon City for her dedication to the mass movement that helped topple the Marcos dictatorship.

Her surviving family, led by children  Bobbie, Badi and Dick, picked a Sunday last summer  to hold an open-air tribute to Ayi (Chinese for “aunt”), the moniker by which  Malay was known to many.  Bobbie recalled how her mother, weakened by cancer, didn’t want to leave—she still wanted to do many things and spend time with friends. “May asim pa rin (colloquial Filipino to mean she still had the spark of life),” she added. Ayi died at age 77 in 1993.

Then she addressed her mother’s spirit to tell her to be at peace because “OK kami rito at masaya kami para sa iyo (we’re okay here and we’re happy for you).”

Dick told of how his mother was one of the early women drivers who could also fire a gun. This she learned from her father, a USAFFE soldier killed in the last war.  Ayi was especially hard on reckless jeep and bus drivers. She’d go after them, facing and scolding them.

She wrote her master’s thesis about a fishing village in Obando, Bulacan, but she left the sheaf of paper on top of the car, drove off and lost it. However, she went on to do other literary projects. The most celebrated is her translation from English to Filipino of Carlos Bulosan’s “America is in the Heart.” She won the Best Translation Award from the Manila Book Circle for her work.

Gemma Cruz-Araneta referred to Ayi as “my political mother.” They traveled together to China when it was still closed to the world, hidden by the so-called Bamboo Curtain.  Ayi inspired Araneta to write about the Philippine situation. The younger writer wondered what Ayi would say today about the way China is (mis)treating the country.

Mariel Francisco, one of three pangalay dancers along with Ramon Magsaysay Awardee Ligaya Amilbangsa, said she became friends with Ayi through Bobbie and husband Satur Ocampo when they were still kept in a maximum security prison.

Ester “Iting” Isberto, a former political prisoner, looked up to Ayi for always looking “serene and unruffled despite stressful situations” like the hunger strike of detainees. Ayi was a calming presence during that period as they prepared for the strike. Isberto said, “I want to be serene like her all the way to my old age.”

Younger sister Paula Sta. Ana called Ayi her idol and second mother.  She watched as  Malay managed the home and served as their father’s secretary-accountant in a then flourishing business before the Depression.

Gilda Cordero-Fernando painted a different portrait of Ayi, whom she didn’t consider serene, but a feisty woman out to pick out a fight with her husband. What sealed their friendship was their joyful husband-bashing during ladies’ lunches. But Fernando taught the older woman something—to buy pasalubong (gift) for the husband no matter how annoyed they were with their partners.

In between the reminiscences one afternoon under the acacia trees of the Bantayog grounds, soprano Stephanie Aguilar sang songs from Ayi and Armando’s era like “Summertime,” “I’ll Take You Home Again, Kathleen,” “Bituing Marikit” and “I’ll Be Seeing You.”

“I’ll Take You Home Again, Kathleen” was often sung by the Rotarians of which Armando Malay was a member.