NCCA’s Taboan national lit fest will have its Manila leg on Oct. 5 when UST forum tackles the state of literary arts in the University Belt | Inquirer Lifestyle ❮ ❯ 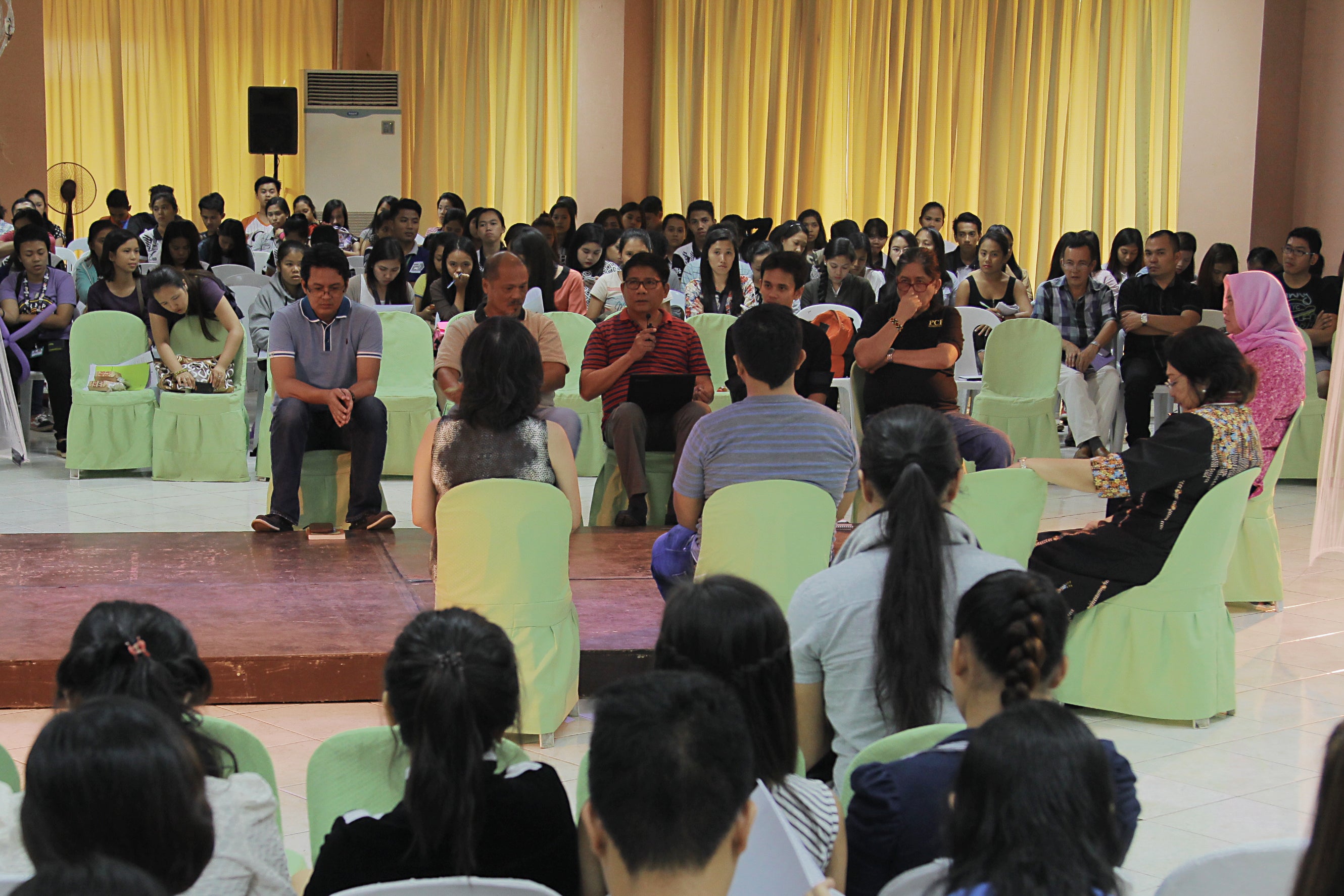 STUDENTS and guests in an open forum with National Commission for Culture and the Arts’ National Committee on Literary Arts and Mindanao writers. PHOTOS BY LESTER BABIERA

NCCA’s Taboan national lit fest will have its Manila leg on Oct. 5 when UST forum tackles the state of literary arts in the University Belt

WRITERS in Mindanao are often widely perceived to have written only about armed and religious conflicts and nothing more, especially by writers and readers outside of the island.

Contrary to the stereotype, Mindanao literature has been diverse and is continuously evolving. Mindanao writers do not write only about war and religion, they tackle other issues as well—family, nature, sexuality and personal relationships. Like any writer.

This diversity in Mindanao writing was showcased in the Mindanao leg of Taboan, the annual national literary festival of the National Commission for Culture and the Arts (NCCA). It was held at Central Mindanao University in Bukidnon, Sept. 14 -16.

“[Many have] been trying to define Mindanao writing but it is very diverse because of many cultures and languages,” said Taboan 2016 project director Christine Godinez-Ortega, also the head of the National Committee of the Literary Arts under the NCCA. “But when the writer from Mindanao writes stories, these stories will reflect the setting [of where he came from] or his culture.”

The annual literary festival has always stressed   regional literature. For this leg, it invited writers from different parts of Mindanao like Zamboanga, Davao and Sultan Kudarat to hold forums with literature educators and students and the general public.

Diandra-Ditma Macarambon from Marawi expressed frustration on how there seemed pressure on the Mindanao writer to restrict herself to certain topics.

“There are some people who limit the type of stories that we [Maranaos] can write,” Macarambon said. “I talk about this because sometimes I encounter people who have certain expectations of the type of writing we are capable of.”

She said Maranaos have unique practices brought about by their sociohistorical background and environment, but their works should not be limited to these experiences.

He said teachers should tell their sttudents the complete and truthful story of Muslim Filipinos. He explained the twisted picture of the Muslims owed to a host of factors, such as media sensationalism.

Macla said his literary works are greatly influenced by the Moro experience during the all-out-war of former President Joseph Estrada against the Moro Islamic Liberation Front in 2000.

He said that he was just 7 years old during that time and although the crisis was vague for him then, the war shaped him as a Moro.

“In Mindanao, it is largely oral [in] tradition that is why the ‘hugot’ or spoken word is a sensation here, a phenomenon,” Godinez-Ortega said. “It is very popular in Cagayan de Oro and Iligan. It is starting to gain popularity in Zamboanga and Sultan Kudarat.

With or without spoken word performances, Mindanao literature is getting more vibrant, Godinez-Ortega said. She explained many writers from Mindanao are getting published.

Some notable writers from Mindanao are German Gervacio, Guttierez Mangansakan and John Bengan, she added.

Aside from literary artists, Mindanao is also the home of well-known musician Joey Ayala (son of poet Tita Lacambra-Ayala) and other performing artists such as Kahika, Talahari and Mindanao State University-Iligan Institute of Technology’s Integrated Performing Arts Guild graced Taboan in Bukidnon.

Taboan 2016 will have a Manila leg on Oct. 5 when the University of Santo Tomas Center for Creative Writing and Literary Studies (UST CCWLS) holds a one-day forum on the “The Literary Muse in Manila,” at the Thomas Aquinas Research Complex Auditorium, UST campus, España, Manila.

The conference will tackle the status of literature and creative writing—in short, of the literary culture—in different universities in the city of Manila.

Taboan events will also be held at Ateneo de Manila University, and in Iriga, Naga, Cebu, Tacloban and Iloilo.