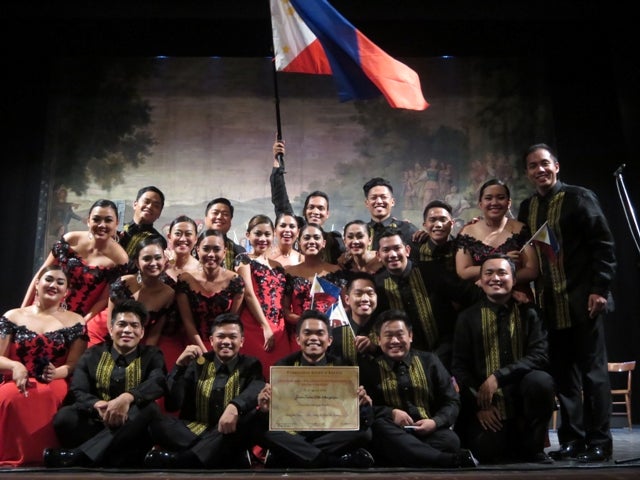 THE PMS after getting the award with the Philippine Flag

Madrigals to hold homecoming concert after Arezzo victory on Oct. 8

Composed of 22 members, the PMS bagged the first prizes in the Compulsory Program; Sacred Music; Monographic Category, and second prize in Secular Music. It was awarded the first prize by a listening committee in folk music, and popular music. In the later category it bagged the public. It was also given the Best Interpretation Award of a Renaissance piece.

The PMS topped the four chosen choirs to compete with the coveted “Gran Premio Citta di Arezzo,” and emerged the lone finalist in the European Grand Prix for Choral singing, which will be held next year in Tolosa, Spain.

The six competing choirs sing before a jury a program of about 20 minutes of their choice and only one choir will be awarded the Grand Prix. To date five winners had already been declared save the winner at Tolosa, Spain.

The PMS is the first choir to have garnered the Grand Prix twice. It joins four other choirs that had won twice the Grand Prix as of last year. It won the coveted prize in 1997 in Tolosa Spain, under the direction of its founding choirmaster, the late National Artist for Music Maestra Andrea O. Veneracion. In 2007, the PMS won again the Grand Prix in Tours, France this time under the stewardship of its incumbent conductor, Mark Anthony Carpio. Maestra Veneracion passed the baton to Mark Anthony Carpio in 2001.

The youthful, soft-spoken choirmaster Mark Carpio said that he hopes the PMS bags the Grand Prix for the third time next year, and thus makes history as the first to achieve such a feat.

In the folk as well as popular categories, the PMS sang Philippine compositions. In the first category the choir rendered “Koyu No Tebului” by E. Palaruan, a former PMS member, and the ever popular, “Kruhay,” by B. Castillon. In the popular category, the PMS sang the arrangements of its resident member Matthew Maniano: “My God is a Rock” and “Queen of the Night.”

In celebration of this Grand Slam, the PMS will stage a homecoming concert, “Trionfo,” on Oct. 8 at the CCP Main Theater at 8 p.m. It will depart for its three-month U.S Concert Tour the following day.