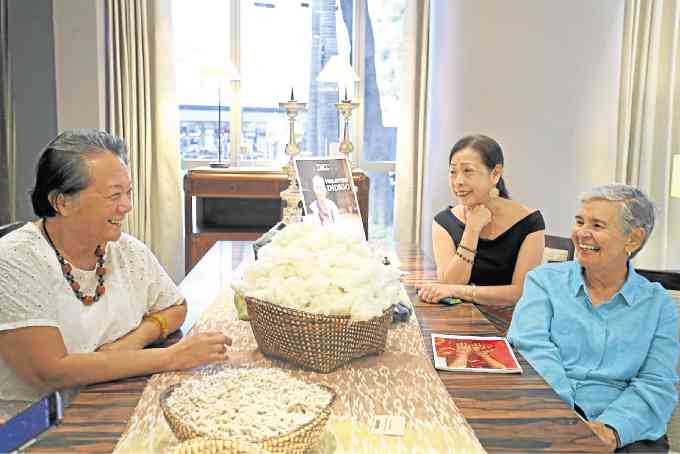 THE HABI Market Fair (Oct. 14-16, Glorietta Activity Center, Makati) is more than just another fair for bored housewives and mall-goers. Its success will make a difference for cotton growers and weavers in the country.

It is also an advocacy close to the heart of Maribel Ongpin, a feisty woman who has championed many causes, from the preservation of Baguio heritage to feeding programs for children.

The staunch advocate and political gadfly wrote in her newspaper column last July how not many of us know that “the Philippines has a wealth of natural fibers, about 29 of which have utilitarian value that can be converted into export products or handicraft, even liquor (maguey).”

As a member of the Subcommittee on Fibers of the Philippine Council of Agriculture and Fisheries of the Department of Agriculture, Ongpin is well aware of the issues bedeviling the industry, especially abaca production.

Local weaves are also among her concerns. “You can’t imagine the sheer number of designs from each of the different tribes,” she said.

These pieces aren’t limited to apparel as we saw at a recent press conference.

While there were several charming tops and airy blouses on display, there were also items for the kitchen, the bath and the bedroom. Squares of cotton fabric from the Cordillera had an au courant chevron pattern or came in bright pairings like lime and light blue.

To prevent them from unraveling, the edges were stitched using a thick contrast thread. These cotton napkins were so different from dainty piña serviettes still being sold at pasalubong centers.

There were also white summery tote bags with top stitching, and flats with delicate designs. Stuffed toys were also given an update with patchwork fabrics.

This year, the fair will focus on locally grown, spun and woven cotton. There will also be inabel from Northern Luzon, silk from Bacolod, piña from Aklan and Palawan, and colorful weaves from Mindanao.

“We had only around 12 participants when we first started, but now we have over 60. We’ve even begun vetting participants because we can’t have too much of one thing,” Ongpin told Inquirer Lifestyle.

In the past, the issues facing traditional weaves included the drop in the number of weavers and the general lack of interest in what was considered as material for stodgy costumes.

When they held a cotton spinning module in Iloilo early this year, they brought spinning wheels to teach the 10 participants, all women, how to spin cotton into thread before it can be woven into fabric.

“That module ran for four days, and on the last day, the women brought along their daughters,” Ongpin said. “These were
10- to 12-year-old girls that were doing carding.”

Carding is usually done by children and involves removing and untangling the short cotton fibers.

“We saw firsthand that if you have a crafts shop, you will have little girls accompanying their mothers,” she said. “The interest is there.”

Ongpin then narrated how, in the town of Pinili, Ilocos Norte, there used to be only five or six elderly weavers: “When textile weaver Magdalena Gamayo was recognized by the National Commission for Culture and the Arts (NCCA) as a National Living Treasure, one of her duties was to have a school of living traditions where she could teach what she knows. Now, there are more than 20 young weavers. They know they can actually earn and make a living out of weaving.”

Interested parties are given colored cotton thread but the design is all theirs. “We give them the thread as a promo… so they can start using cotton since most of them have been using synthetic blends because that’s what was readily available in their towns. We’re advocating the use of cotton which is grown and spun here. If they get used to it, they can then buy (cotton thread) which is good because it will then support cotton growers and manufacturers,” said Ongpin.

It also helps that Ongpin and her team pay the weavers immediately. “They get a fair deal; some middlemen can be very exploitative,” she said.

At the Habi Market Fair this year, buyers can look forward to a wide range of woven products including live demonstrations of certain weaving processes. Weavers and vendors will also be able to exchange ideas on the marketing, creative design and modern use of the fabrics with traders, designers and other interested parties.

“Aside from being a selling event, the market fair is a school in entrepreneurship especially for new participants,” Ongpin said.

“It will give them a chance to check out the competition so that when they come back next year, they’ll be smarter. They will know what kind of products the market wants and decide what they can offer.”