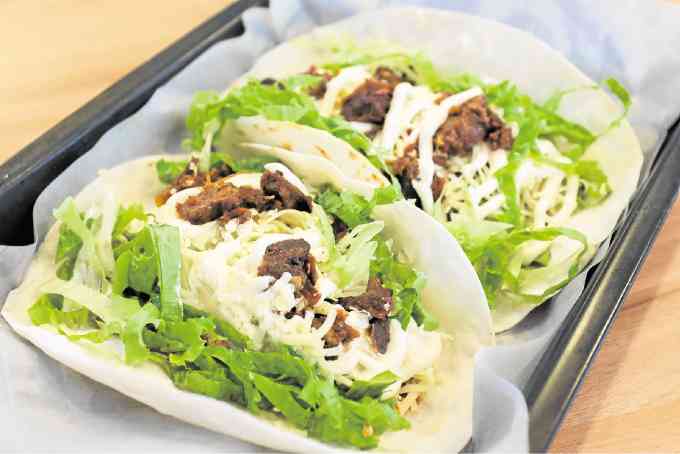 Annyeonghaseyo! Say hello to “K-Town cuisine,” which promises to be as fetching as your favorite K-pop idols.

These can be had in the 6-Flavor Samgyupsal Set which comes with a siding of salad, egg rolls, soup, kimchi and kimchi fried rice, which are all unlimited.

The six flavors are very Pinoy, but the meat is cooked Korean-style on the tables with built-in smokeless grill, according to Donna Tan-Ng. Together with her sisters Dorothy Tan-Dee and Diana Tan-David, they run Soban and Sariwon Korean Barbecue, a Korean franchise they brought to the Philippines through their company The Happyfoods Group.

Soban is the Tan sisters’ original concept, and their take on casual Korean dining: industrial interiors, mismatched chairs, value for money. And these ladies love Korean food as much as they love their Korean cosmetics.

“We’ve been to South Korea several times, and we usually eat out family style,” says Ng. “For Soban, we collaborated with Sung Rah of Sariwon Korea to come up with a K-Town menu.”

Soban K-Town Grill is Korean food made hip. The menu is classified as “fusion,” but it’s a cool one.

For starters, order the Kimchi Fries, a sharing serving of French fries smothered with cheese, roasted pork bits and kimchi. Then you can explore how you want your Korean barbecue served.

First, choose your meat. Soban serves chicken barbecue (dak galbi), pork barbecue (samgyupsal) and beef barbecue (bulgogi). These can be had as a K-Taco, a soft flour tortilla filled with lettuce, kimchi, sour cream and cheese, or as a Korrito, or Korean burrito with kimchi fried rice.

We like the Korilog, Soban’s version of tapsilog—a comforting bowl of kimchi fried rice and beef bulgogi topped with a runny fried egg; and the Chicken Teriyaki Bap, a sizzling bibimbap rice bowl with crunchy veggies.

For groups, it is best to order the barbecue sets, suggests Dee. The Classic BBQ Combo Set, which serves four, is a sampler set of beef, pork and chicken barbecue, with two orders of japchae noodles and unlimited sides.

“Sets are popular among diners from nearby offices who go on weekday lunch, and families hanging out on weekends,” says David. “Koreans like the Original BBQ marinade, while kids like the Fruity flavor.”

Aside from the barbecue, diners also order the surprise best seller: the fried chicken.

The Dak Bulgogi is boneless fried chicken cut into strips. It is caramelized till crunchy, is slightly sweet and topped with sesame seeds. It is served with rice, but one can also have it with a cold beer.

Soban also serves soju, Korean wines, and quirky drinks such as the Galaxy, a slushy, and Black Dragon, a cocktail with black tea.

“Soban” means “small tray” in Korean, but this grill is for big appetites. The barbecues are well-marinated, tender and flavorful. The kimchi is of good quality, and the unlimited rice requires strength of character.

We’d like to see improvements on the Beef Ramyeon Korean ramen, but we love the hearty bone-marrow soup that comes with the sets, and the Coffee Prince ice cream with Graham and red beans inspired by the hit K-drama of the same title.

Now if only we can have a Gong Yoo look-alike to serve our meats and scoop our ice cream.