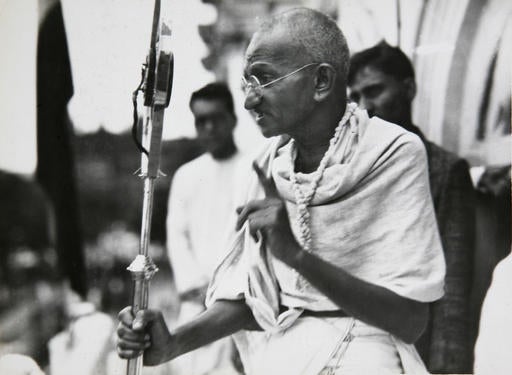 In this file photo dated 1931, Mahatma Gandhi talks to a crowd in India. The Indian independence leader who is considered one of history’s great champions of non-violent struggle, Gandhi was nominated for the Nobel Peace Prize five times, but never won the honor. Nobel Prizes cannot be changed or revoked, so the judges must put a lot of thought into their selections, with this year's awards due to be announced over the next two weeks. AP

STOCKHOLM — Punters are putting their money on this year’s Nobel Peace Prize going to Greek islanders who have opened their hearts and homes to hundreds of thousands of migrants crossing the Mediterranean.

The award will be announced Friday in Oslo, Norway, and as usual the Norwegian Nobel Committee isn’t dropping any hints about its choice.

Betting site Unibet gave the lowest odds Thursday to the Greek islanders, while another betting site, Paddy Power, had the White Helmets rescue group in Syria in first place, followed by the islanders.

Others with low odds include Pope Francis, the architects of Colombia’s peace deal and Congolese surgeon Denis Mukwege, who treats victims of sexual violence in that nation’s civil war.