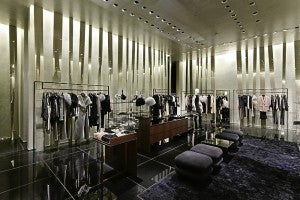 While it’s surely not the legendary Italian designer’s most seminal design, it was one of his collaborative pieces with the flamboyant pop star, and an absolute scene-stealer at the 2010 Grammys. If not his typical, classically elegant red-carpet dress, it’s one of the most memorable from Armani in recent memory.

Customer-guests at Armani/Chater House in central Hong  Kong will not be disappointed, however, as they’re afforded a rare chance to see up close select red-carpet Armani Privé dresses worn by Hollywood stars like Anne Hathaway, Beyoncé, Katie Holmes, Jodie Foster and Marion Cotillard.

The exhibit, ongoing until Nov. 28, was unveiled last week by Armani’s niece, Roberta Armani, who flew in to grace the relaunch of the just-remodeled Armani outpost in Hong Kong.

The red-carpet retrospective is one of the highlights of the event.

Next door, the secondary line Emporio Armani is holding a photographic retrospective exhibit to mark its 30th year, with images originally printed in the Emporio Armani magazine.

One of only five such concept stores in the world, the Armani/Chater House first opened in 2002, becoming second only in size to the fashion house’s inaugural boutique in Milan. It’s a showcase of the entire Armani lifestyle, and houses the Giorgio Armani boutique, Emporio Armani, Giorgio Armani Cosmetics, Armani Junior, Armani Dolci (confectionery), Armani Fiori (flower shop), as well as Armani/Aqua, a restaurant-bar, and Armani/Privé, an exclusive club lounge, both of which opened only in August.

The refurbished Giorgio Armani shop has a modern bamboo motif, an obvious nod to modern China. The motif continues on to the LED backlight gilt metalwork signage on Chater Road. A two-story-high backlit logo on Pedder Street, meanwhile, summons shoppers to the 7,000-sq-m Emporio Armani store, home to the brand’s entire collection.

Both the Giorgio Armani and Emporio Armani store designs reflect the chic, elegant lines the designer is known for. Black and silver are dominant colors.

Armani has a symbiotic relationship with Asia, where it has a strong presence. The region is home to three of Armani’s five concept stores, in Tokyo, Shanghai and HK; the two others are in Milan and New York City. In the Philippines, luxury retailer Stores Specialists Inc. unveiled its first Emporio Armani boutique in Greenbelt 4, Makati, this year.

“I have always looked to the Orient, and especially to countries and cultures that provide me with precious inspiration,” the designer is quoted in a statement. (His recent couture collection was a nod to Japan.) “Hong Kong… is one of the most cosmopolitan cities of the world, with a vibrant, seductive and hospitable atmosphere that has fostered a unique urban idiom, a distinctive taste, and a lifestyle without parallel.”

(No formal interviews were granted regional media, but she told South China Morning Post: “I think it is very important for me that my family is involved in the running of the business, but we are all in separate areas… so we are all helping my uncle bring in ideas from different fields.”)

The designer’s niece often stands in for her uncle in public appearances. Roberta Armani, 41, originally intended a career in acting, but eventually settled in the family business.

In the years that she has worked with Armani, she has gone on to cultivate the luxury house’s longstanding relationship with Hollywood. Tom Cruise and Katie Holmes are personal friends; when the couple wed in Rome, it was Roberta who took over the wedding planning when she deemed the venue they picked wasn’t special enough.

It’s worth noting that it was her uncle who first thought of dressing movie stars for the red carpet. Every Hollywood celebrity of note has since walked the red carpet in Armani:  Julia Roberts, Jodie Foster, Tom Cruise, Leonardo DiCaprio, Cate Blanchett, Penelope Cruz.

This month, pop star Rihanna, who models for Armani, rolls out a capsule collection she designed for Emporio Armani. It’s a privilege bestowed on Armani’s celebrity spokespersons.

One of the most notable pieces in the HK exhibit is the fully sequined, scoop-back dress Anne Hathaway wore to the 2010 Golden Globes. A blue satin column, one of several she wore as host of this year’s Oscars, is also on display.

There’s the chain-mail dress Beyoncé wore when she performed in the 2005 Oscars, as well as a fully beaded nude-colored gown Oscar-winning actress Marion Cotillard wore to the Cannes Film Festival in 2007.