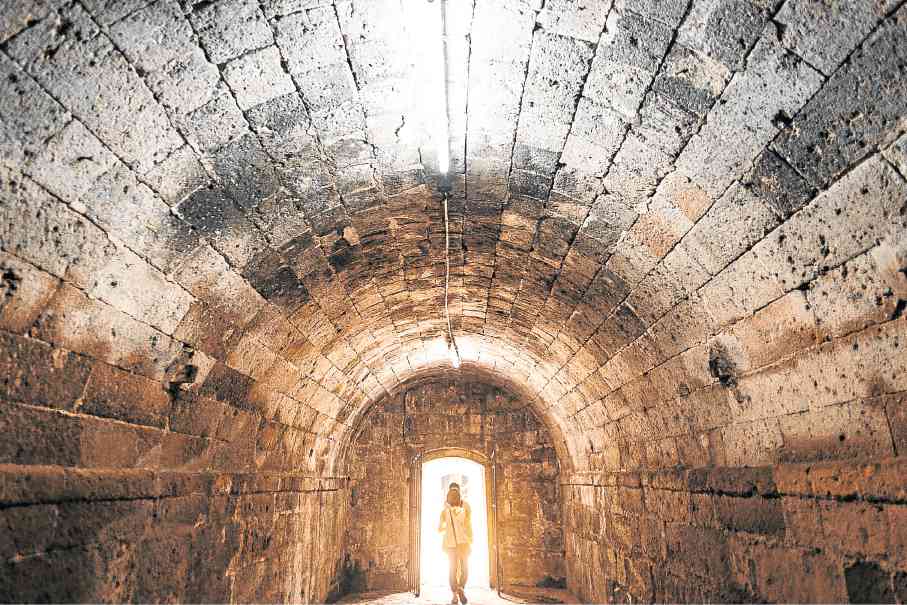 One of the tunnels at Fort Santiago. JILSON SECKLER TIU

Revisiting Intramuros on a bike

We didn’t have the slightest idea that riding a bike around the cobbled streets of Intramuros would be a pain in the ass—literally.

Though we came prepared with maps, things still went wrong—especially when you’re in the company of someone whose sense of direction is worse than yours.

But what started out as a bumpy ride actually turned out enjoyable while getting lost in the Walled City’s vintage buildings and ruins, and stumbling into an old favorite restaurant.

Intramuros—the oldest district in Manila—is a 64-hectare stone fortress originally constructed in 1571. It was the seat of government during Spain’s conquest of the Philippines from 1571-1898.

At the time, only Spaniards and mestizos were allowed entry to Intramuros—which is Spanish for “within the walls.”

Today it is a popular tourist attraction. But unlike many whose starting point is Fort Santiago, we chose to kick off on the busy General Luna Street. Here we discovered Bambike Ecotours (tel. 5258289, 0916-5892100; bambike.com/ecotours), a guided bamboo bike tour around Intramuros. Unfortunately we missed the regular tour, and the other option was to rent a bike and create our own adventure.

Off we went to San Agustin Church, the oldest religious edifice built by the Spaniards in Luzon in 1571. It is said that the present structure is the third reconstructed version on the same site. Fires, earthquakes and typhoons had destroyed its predecessors.

A few blocks away is the Manila Cathedral, the ecclesiastical seat of the Archdiocese of Manila. The church was constructed after Spanish conquistador Miguel Lopez de Legazpi defeated local settlers led by Rajah Sulayman and Rajah Matanda.

What we see today, however, is also not the original structure. According to historians, the first Manila Cathedral was made of nipa and bamboo before a fire razed it to the ground. The present edifice was constructed in the 1950s, featuring sculptures of saints on its main facade.

Bronze is used in many of its altarpieces, sculptures, grille gates, chandeliers. Beautiful stained-glass windows of the church allow natural light to stream inside the cathedral, giving the interiors a soft glow.

A few more blocks away is Fort Santiago—where Rajah Sulayman was defeated by the Spanish invaders; where Jose Rizal was imprisoned before being executed at the Luneta; and where the flag of the United States was first raised to start American rule.

A Rizal shrine and museum were erected to celebrate the life of the National Hero. Fort Santiago can easily turn into a maze of tunnels; to see where he was held prisoner, follow the bronze footsteps on the ground. This will also lead you to his final walk from his cell to the firing squad.

At Fort Santiago is a White Cross that commemorates all imprisoned Filipino freedom fighters. It is also the home of theater house Dulaang Rajah Soliman.

Fort Santiago is one of the most famous landmarks in Intramuros. The cool thing is, it now has QR codes in some areas. Just scan the code with your phone (you’ll need to download a scanner app) and you’ll get interesting information about it.

And, more good news—tour guide Carlos Celdran is back! If you want to experience a walking tour like no other, you can text 0920-9092021 or call 4844945 (Ms Lesley), or visit https://carlosceldranwalks.wordpress.com/.

If you’re not into biking or walking, White Knight Tours (tel. 5266181, 5266539; www.whiteknighttours.com) offers ATV and Segway tours. We tried the ATV tour, where we had a quick tutorial on how to operate the all-terrain machine. The adrenalin rush is incomparable, no doubt, but they could certainly use better tour guides.

By midafternoon, though, it was overcast, and soon a downpour followed. We would have wanted to keep on going, this time on foot. We may not have seen much of Intramuros, but that’s exactly the reason to go back.