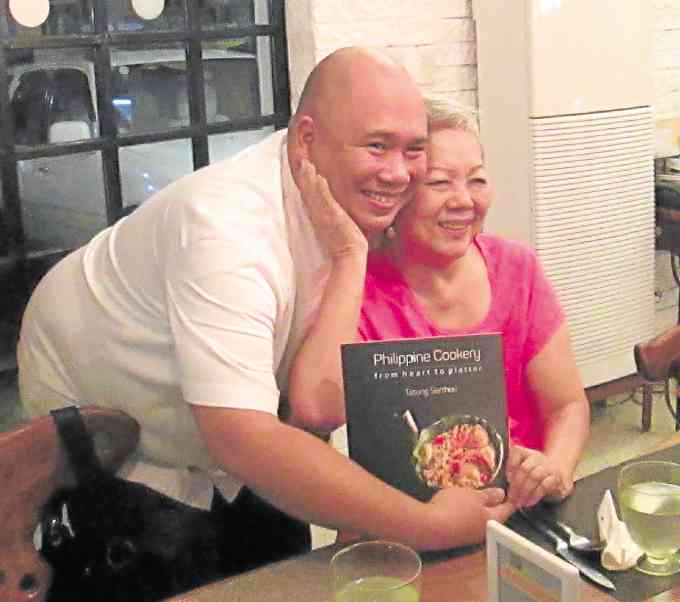 That rainy Sunday evening was perfect for sitting in front of the TV with a bag of chips, but admirers of writer-artist Gilda Cordero Fernando turned up for the tribute to her, including members of the Culinary Historians of the Philippines.

Dubbed “This Is NOT Your Lola’s Cooking,” the recent event at Gourmet Gypsy Art Café on Roces Avenue, Quezon City, was intended by chefs Waya Araos Wijangco and Tatung Sarthou as a “jamming” based on recipes found in a faded, grease-marked, falling-apart kitchen journal from the 1960s kept by the honoree, she who confessed that the secret to her 60-year-old marriage was that she never cooked.

Wijangco said she wanted to raise the discourse on food by “bringing artists together in intimate dinners to explore something cultural.” She started this series with a tribute to National Artist F. Sionil Jose and his Ilocano-inspired diet on June 12.

The two chefs narrowed down the recipes they uncovered from the thick journal to five courses, and gamely added their tweaks and deconstructions with loving heckling from Fernando:

Dinuguan Flan (dinuguan Jello in a shot glass to serve as sauce for a piece of crackly, deep-fried chicken skin and chicken inasal, a taste of cholesterol heaven);

Shrimp Lumpia Salad dripping with mango and cilantro dressing (but Gilda protested that the lumpia served at her house was triangular, not cylindrical, in shape);

Blue Marlin Niçoise (she called for salt to flavor the fish which seemed a little bland to her, as it was slowly cooked in a vacuum-sealed package, then had a eureka moment, saying she was basically a meat, not fish, eater);

Pochero en Sous Vide (the Sunday pochero, but served dry. Instead of beef brisket,  steak cooked for 7.5 hours, but which still retained its pink, medium rare insides, was served with slices of fried saba banana and sweet potato, the beef broth in a separate cup. Io Regalado, Fernando’s grandson, said it was the best steak he had ever tasted in his life of steak eating. The Fernando men are known to be steak lovers.

Eton Mess and Tablea Pot de Crème, the first dessert made up of a “mess” of meringue, salted egg’s custard cream, macapuno and a ring of pineapple, the second inspired by the hot chocolate topped with fresh pinipig always served to guests at Fernando’s home, but this time turned by Wijangco into a chocolate mousse in a glass with slightly toasted pinipig, still green in their freshness and thus sweet to the taste.

Wendy Regalado, Fernando’s daughter, said it was her grandmother, Consuelo Luna Cordero, who was the great cook and baker. Her brazo de Mercedes, pili cake and pineapple upside-down cake were legendary beyond the clan’s reach. The recipes for these were continued by nephews and nieces of Consuelo, not by her direct descendants.

Fernando agreed that her mother “was a very good cook, but we were always fighting so I didn’t learn how to cook. What I learned was to write about food. But cooking? No.”

She called the greasy journal “the maid’s book so I could remember what was served to whom, and there would be no repeats.”

Nina Daza Puyat, foodie, TV host and daughter of another legend, Nora Daza, asked Fernando if she would ever reprint the first book released by GCF Books, “Culinary Culture of the Philippines.” Puyat said her mother’s copy was also tattered from constant reference. She found a rare copy at a bookstore in a mall, but the price was pegged at P26,000. Fernando said her book publishing days are over—“pagbebentahin mo pa ako (you’re gonna make me sell)!”

Puyat commended her for her travels to the provinces and regions to discover culinary fare. Fernando said she was actually running away from her husband Marcelo when she went on those trips “because I was mad at him and wanted a vacation from marriage.” Nonetheless, she said he was the one who had the “panlasa (taste buds)” for good food.

From him she also learned how to sip soup since she had been a “dry eater (fried food only)” before she got married. He told me, “Taking soup is a mark of a civilized person.”

She admitted to midnight cravings for Chiz Curls and drinking soda to stay alive. She added, “To make my day healthy, I drink pure green juice made from romaine lettuce.” —CONTRIBUTED