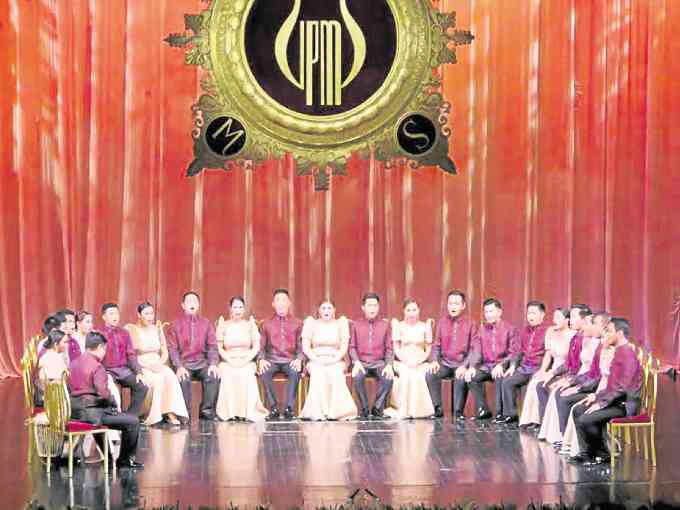 The Philippine Madrigal Singers awed their listeners in their homecoming concert held at the Cultural Center of the Philippines Main Theater.

The concert was a hit as the audience, notably young choristers, came in droves that literally filled the theater.

Numbering 22 and performing under their youthful choirmaster Mark Anthony Carpio, the Madrigals rendered the songs they recently sang in the concluded international choral tilt at Arezzo, Italy, the “Concurso 64th Polifonico Internationale di Arezzo,” admittedly the most difficult and famous competition for polyphonic music.

The Madrigals practically won a grand slam in the competition where they joined seven categories, including the “Gran Premio Citta di Arezzo” that selects the choir to participate in next year’s European Grand Prix to be held in Tolosa, Spain.

Needless to say, the concert was a fait accompli, so to speak. Choirmaster Carpio, to whom the baton was handed in 2001 by its founding choirmaster Maestra Andrea O. Veneracion, led the Madrigals in showcasing their sterling capability as a versatile choir.

The Madrigals performed the entire program, consisting of some 19 choral works in different genres, with ease, competence and solid dispatch.

Listeners were fully engaged, as the Madrigals sang the pieces in top form, fully marking the stylistic nuance of each piece. The singers’ soloist caliber was displayed in the rendition of solo parts. To give the optimum tonal balance and projection, the members exchange seats from time to time. Dynamics was well marked and vocal lines were sensitively punctuated.

Indeed, the Madrigals are now a musical icon, whose popularity has gone global.

The Madrigals have postponed its US tour that would have followed immediately after the holding of the homecoming concert in compliance with some visa requirements. The projected tour is reset next year. —CONTRIBUTED