‘When I grow old, I will remember these places’ | Inquirer Lifestyle ❮ ❯ 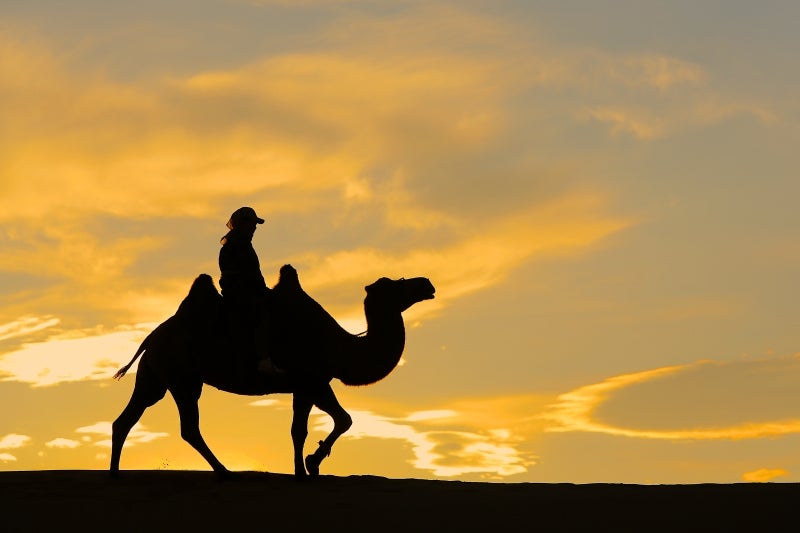 Stark silhouette of a man and camel against a Mongolian sunset

‘When I grow old, I will remember these places’

Instead, he acts more like a photojournalist—documenting the atmosphere, the landscape and the people with his Leica cameras.

Peering from behind tall blades of grass at the foot of the Himalayas, Antonio captures the serenity of a lone Bhutanese house, its multicolored frontage, arched window and sloping roofs.

The mustard sand dunes of Khongoryn Els in Mongolia become patterns of curves and peaks touching an azure sky, while a mountain range behind the Great Wall of China transforms into a series of overlapping blue ridges.

With nothing but sand dunes and the sky in Mongolia, Antonio’s faith is restored. “You will believe there is a God. There’s no car in sight. Back home, you can’t even cross the street,” he notes.

Then there are lone figures emphasizing the beauty of solitude. A fisherman perched on a rock casts his rod into the sea as the camera lens freezes the white-capped waves on the Taiwanese coast. A geisha walks up the steps to the temple in Kyoto. An Aeta drinks water from a stream in Zambales. A camel is etched against a golden sunset in Mongolia.

Antonio attributes all these treasured moments to serendipity.

“Photography is a respite, a way of going out of your day-to-day routine. Travel photography gives one an opportunity to know a place or a person better. It records history,” he says, but points out that “you don’t want to disturb your subjects with tripods and umbrellas. It’s capturing the moment and the soul of the place.”

Antonio, chairman of Century Properties, is an inveterate traveler and a photography buff. A member of the Camera Club of the Philippines and the Leica Club, he has been bonding with other photographers and joining competitions.

In 2012, he got serious with travel photography by joining the National Geographic expeditions. The program is designed for amateur photographers who want to improve their skills through location shooting and immersing themselves in the destination.

His first foray was in Bhutan to observe the rituals of monks, the landscape dotted with traditional architecture, the majestic Himalayas and the smiles of the locals.

In Mongolia, he and his colleagues roughed it  in the ger, the circular tent of nomads. These are made of animal skin or canvas, and are packed as they travel from one place to another. They kept themselves warm by sitting in front of the fireplace.

Unlike the rest of the world which derives gratification from technology, Mongolians still appreciate simple pleasures like wrestling and horseback riding. “They are not into tennis or basketball. They use their own resources,” says Antonio.

On his third time in the National Geographic expedition, he and the group photographed the streets of New York with a fresh eye. “You shoot people under the Brooklyn Bridge, which has a huge concentration of humans,” he recalls. “You shoot in Wall Street, where everyone is in a suit, or walk in SoHo where people are hip. Brooklyn’s walls are filled with graffiti.”

Antonio recently went on a private expedition to the Antelope Canyons in Arizona. The place is famous for its beautiful  passageways that have been eroded by time.

Photographers are lured by the shafts of light that dramatize the corridors of the Upper Antelope Canyon.

The Lower Antelope Canyon is tighter, making it challenging to find the right angles.

In the Philippines, his favorite destination is Batanes—its dramatic cliffs, stony beaches, rustic stone houses and its people, the Ivatans in their vakul, a headdress made of grass, and Honesty Coffee Shop, a self-service store where customers write down their purchases and drop the payment in a box.

He captures the country’s natural splendor in the rice fields of Pampanga and the hills of Tanay. “We are rich in history and resources. We’ve neglected them because our priorities have changed. I choose to shoot the beautiful places in the Philippines that are endangered,” he says.

Whenever he travels, Antonio makes a detailed itinerary. He researches on the subject matter and has mental images of what he wants to capture.

After using many popular brands of cameras, he is now content with a Leica, whose lenses, he says, perform better than others and work with various lighting conditions and depths of field without affecting the image quality.

He packs the Leica SL, a state-of-the-art model for professional photography, which has the fastest auto focus in capturing distances between subjects to produce a sharp image. He also uses the compact Leica M, which eschews complicated menus and takes perfect shots.

A traveling companion to his Leicas is his Huawei smartphone, whose camera provides professional quality photos. “It’s like having a Leica on your phone,” he says. “I use it on business trips. You operate it like a camera, complete with aperture and speed.”

After the expeditions, Antonio and an assistant view and edit the photos.

He sums it up: “Travel photography is chronicling an event, history or a place. When I grow old, I will remember the place. Even the gallery of your phone will tell you where you’ve been.”