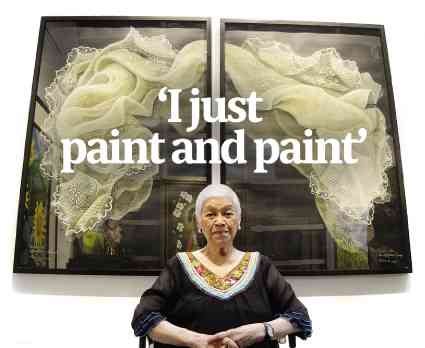 Araceli Dans at 86: ‘I just paint and paint’

The problem with being on the cutting edge, someone once said, is that oftentimes, you get cut.

Araceli Limcaco Dans has never had that problem.

In the seven decades or so that she has been painting, she has seen art trends come and go, all the various –isms—cubism, surrealism, expressionism both abstract and not. And except for a very brief period early in her career when she flirted with modernism (just so she could understand what it was about, she says), she has resolutely stuck to her guns.

That is very much in evidence in “Ang Mundo Ni Inay”, Dans’ last exhibit at Ayala Museum.

Judging from the subject matter of the paintings and a number of sculptures in painted paper clay, motherhood forms a large part of that core.  It is a subject the artist is intimately acquainted with, having reared 10 children with her husband, the late technocrat Jose P. Dans, Jr.

Also in evidence is the calado or lace that has been a recurring motif in Dans’ work.

Beyond its subject matter, however, one might argue that Dans’ work is about painting itself. 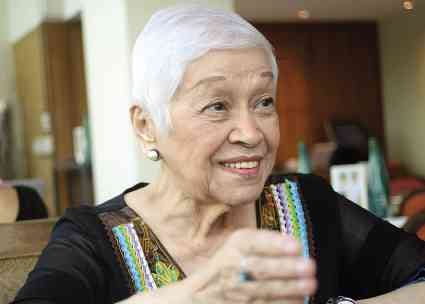 There is an unmistakable joy in the way the artist’s brush describes the play of light and shadow on a lace shawl, a sunflower or a mother’s face as she nurses her sleeping child.

Even when she paints inanimate objects, such as clothes hanging on a line above a lush garden, they glow with an inner life, the “is-ness” described by the mystics and various mind voyagers. The artist sees as one whose doors of perception have been cleansed. Thanks to her skill with pencil and brush, the viewer can see it, too.

The label-headed might be tempted to call it “magic realism,” though from Dans’ perspective, is there really any other kind?

In the heavy bombing that preceded the liberation of Manila, the barely teenage Dans fled Malate with her family with only the clothes on her back and her most precious possession, her palette box.

Her father was an insurance man who, ironically, cared little about money or the future. He was a womanizer, good-looking and generous to a fault, at least as far as his friends were concerned. It didn’t make for the most stable household, and the end of the war saw her parents separated and the family going through difficult times financially.

Luckily, Dans always had her art.

“I’ve been painting since the age of eight,” she recalls.

She had a natural talent for drawing, so it made sense that she would study fine arts, and she enrolled at the University of the Philippines in 1948. The School of Fine Arts was still in the bombed-out ruins of what is now the Department of Justice building in Padre Faura, but by the following year, the school would move to a Quonset hut in the university’s new campus in Diliman.

The dean at the time was none other than Fernando Amorsolo, and the faculty included sculptor Guillermo Tolentino, both of whom would become Dans’ mentors.

“I was still young, only 16 or 17, but Amorsolo saw that I was a bit more advanced,” she recalls.

This was confirmed when she joined a painting competition among the students, and her work—a portrait of a laundrywoman—won over the works of even the senior students.

The director of the National Museum happened to be visiting at the time, and he bought her painting for the then handsome sum of P80.

“I felt like I had won the sweepstakes,” she recalls. “The tuition for one semester at the time was P70.”

By this time, Dans was helping support her family by painting portraits of her wealthier classmates for P20 each. Partly to escape her mother’s nagging about the rent money, etc., Dans moved into a dormitory and threw herself into campus life, such as it was in the late 1940s.

It was then that she met a brilliant engineering student named Jose “Totoy” Dans Jr. The pair soon became college sweethearts.

“He said ‘elope, you dopes,’” recalls Dans. “He believed in young marriage.”

Meanwhile, Amorsolo had arranged for her to graduate after only three years, not only because she already had all the skills required of a fine arts graduate, but more importantly because he understood that she desperately needed to use those skills to earn a living.

“In those days, artists had hearts,” she says.

And so it came to pass that in 1950, the same year they both graduated, Araceli and Jose were married in the first ever UP Diliman wedding.

Jose started up his own construction company. “It was called ‘Erectors, Inc.’” says Dans. “People would laugh at the name.”

Meanwhile she started painting in earnest. But first, she had to get something out of her system.

The modernist movement was already in full swing by the time Dans enrolled at UP.

“Amorsolo didn’t like it,” she recalled. “They couldn’t draw, and people couldn’t understand what they were trying to do.”

She herself didn’t like the new thing, but she couldn’t dismiss it out of hand.

“I tried it for three years,” she says. “Then my husband said ‘are you enjoying yourself? Why are you doing it then?’ I just wanted to understand it.  And then I went back to realism.”

She hasn’t looked back since.

By the time she was 34, Dans already had 10 children. Somehow, she had also built a reputation as a portrait painter, and was making a good living at it.

Apart from her own work, she has also had a career as an art educator, establishing the Fine Arts program of the Philippine Women’s University and later the art education program of the Ateneo de Manila grade school.

Meanwhile, her husband eventually became Minister of Transportation and Communication under Ferdinand Marcos.  It was under his administration that the Light Rail Transit system and cellular telephone communication were created.

Dans continues to be a prolific painter. In 2011, 185 of her portraits were compiled from various private collections and were shown for the first time.

One of her granddaughters now manages her career.

“I just paint and paint,” she says. “The paintings end up in storage, and sometimes I forget about them.”

When they do see the light of day, though, her works now fetch top-tier prices.

“As an artist and a sage,” Sandra Dans and Roberta Thomas write in “Moments of Grace,” the catalogue for “Ang Mundo Ni Inay,” “Dans’ paintbrush glides gracefully spanning nearly nine decades of artistry and maternal wisdom.” 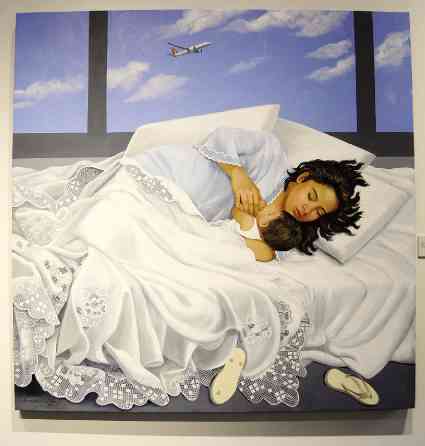 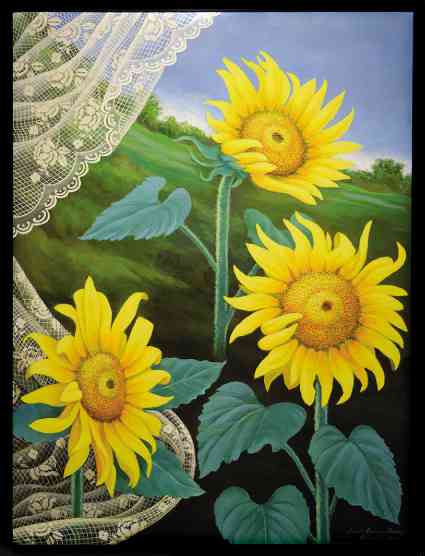 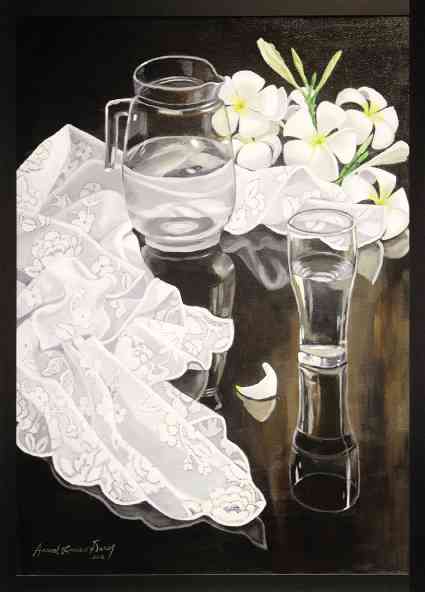 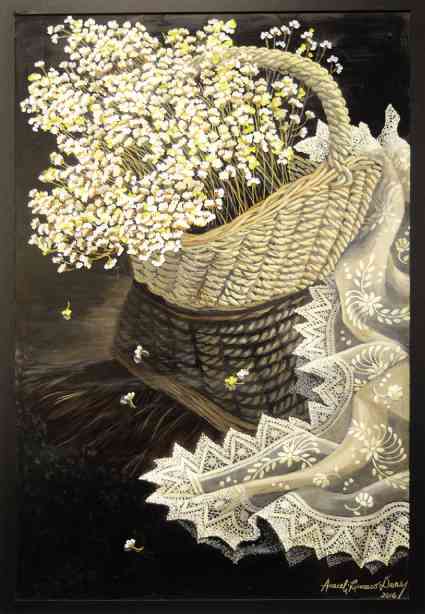