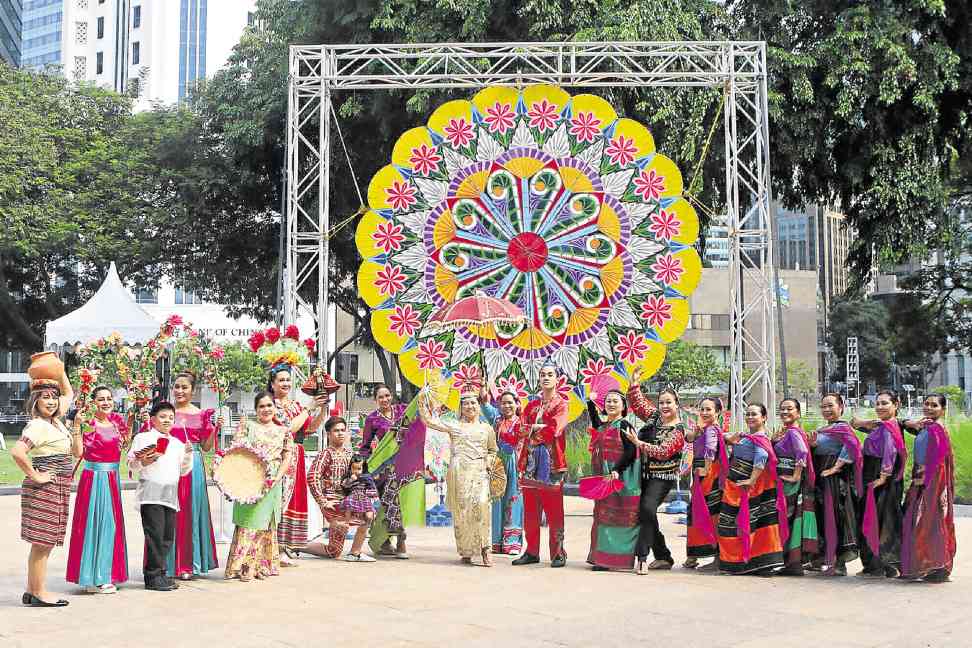 Kultura’s performers pose in front of the Parol

The Singapore River and the Asian Civilisations Museum (ACM) in Singapore are now lit up at night by a giant Filipino parol.

A gift from the Filipino community in Singapore to their second home, the beautiful floral-shaped giant Christmas lantern can now be seen by tourists who take boat tours along the river, visitors to the museum, and  the many thousands of workers who work in the Central Business District of Raffles Place, which the museum fronts.

The parol lighting marked the end of the ACM’s exhibit on Christianity in Asia, which featured many artifacts from the Philippines, and its Love, Light and Living Festival that features colorful festivities from all over Asia.

The Parol 2016 Team was coordinated by Digna Cruzem Ryan and Loida Corpus, with the support of the ACM, the Philippine Embassy, Tourism Promotions Board (TPB) Philippines, the National Commission for Culture and the Arts of the Philippines (NCCA) and, of course, the Filipino community in Singapore.

Both active members of Friends of The Museum, Ryan and Cruz shared that “from the very beginning, the Parol Project has been motivated by the wish to promote cultural understanding between the Philippine and Singapore communities.

“The parol is not only a religious artifact, but is in itself a work of art. We are not only sharing the parol with Christians for Christmas, but with the broader community of religions in Singapore.”

To celebrate the lighting of the 4-meter high parol, which was lovingly worked on by the museum staff, with “experts” flown in from San Fernando, Pampanga, led by Arvin Quiwa, the ACM organized a whole-day event featuring Filipino dances performed by Kultura Singapore, under the leadership of former Bayanihan troupe performer Celia Diaz Defato.

For two days, and across four performances, the Kultura team, made up of volunteer performers from the overseas Filipino community, donned Maria Claras, ternos, malongs, costumes from the north to the south, and gave the Singapore public a lesson on Philippine culture, traditions and love of arts.

“Kultura Philippine Folk Arts branched out to Singapore from California in September 2010,” Defato explained. “Its main goal has always been to promote, present and preserve Philippine culture wherever Filipinos live.”

As the Love, Light and Living Festival was the inspiration for the event, Defato suggested that the cultural dances reflect both Christian and non-Christian influences, to emphasize the importance of understanding.

The show began with Kzoadaratan and the Kappa Malong, both from Mindanao, which aimed to show the similarity to Malay history and Singapore culture. This was followed by an excerpt of the singkil, and a mini-Sinulog and the Jota Española.

In true Filipino fashion, the performers obliged the enthusiastic crowd—some of whom quickly realized how difficult it was to maneuver the Manton de Manila!

But that was not all. While the dancers were predominantly women, men in the audience were also shown how the traditional malong can be turned into a headdress or a sarong.

Obelia Cutiongco, who co-established the group Espesyal Pinoy for Singapore-based Filipino parents with special needs children, led the Sinulog parade and as she danced, and could not help but get emotional.

“It warms the heart to see many Singaporeans and tourists appreciate our cultural dances and costumes. It was one great way to uplift the image of our country while in a foreign land that we have embraced as our second home.” Cutiongco and her family have been in Singapore for 11 years.

Hunny Rose Castro, from South Cotabato, was proud of the performances. “This show really deserves a bigger audience. I love the rapport among performers and audience, and how the dances and costumes were clearly explained to relate to our culture and history. Proud to be a Filipino!”

On the evening of the parol lighting, the crowd was wowed further with the pandango sa ilaw performance, for which the Singapore River was a stunning backdrop.

Members of the audience, particularly Filipinos working in Singapore, could not help but get teary-eyed—perhaps missing home and family more and more as the Christmas holidays fast approached.

“I feel the Christmas spirit,” Manileña Rowena Magpaye Ampo exclaimed. She reminisced about her younger days in Makati. “Since we brought our four kids, we automatically shared with them how it was to prepare for Christmas when we were young.”

Davaoeña Tracy Lemke was likewise touched. “As a Mindanaoan, I was glad to know more about our roots and culture. I was amazed to learn that fabrics are woven from dreams. My daughters were excited to try out the scarves and the hankies, and most of all they loved the colors! It was a good venue for me to teach my children about their country and religion.”

But perhaps the most excited of the event’s performers were not even the Filipinos, as was the case with Maija, 15, and Kaisa, 9, both from Finland, who gamely joined in, dressed up and danced. —CONTRIBUTED