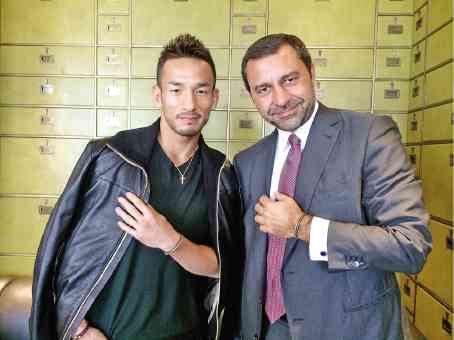 From football to fashion: Nakata draws men to jewelry

Hidetoshi Nakata is known for his acute love of fashion, almost as much as for his talent as an athlete.

He is touted as one of Japan’s greatest football players of all time. He’s also the same man dubbed as the “Asian David Beckham”—and you can surmise the comparison between the two isn’t based on their skills as midfielders.

“I like fashion too much,” says the 39-year-old ex-footballer, grinning rather sheepishly, as he sits down with Inquirer Lifestyle to bat for the jewelry collection he created with Italian fine jewelry company Damiani.

And it shows, even today, as he’s dressed casually in a dark-green pullover, dark-wash denims and white leather sneakers. He’s wearing a necklace with a cross pendant, as well as stacks of bracelets and bangles on both wrists—all from his Damiani collection.

A black leather jacket rests on an armchair nearby, which he reaches for and drapes over his shoulder, quite fashionably, for the obligatory photo.

“But liking and designing are two different things,” he adds. “I love craftsmen. I love things that are handmade, not just [fashion] products, but also food, wine.”

After retirement, he learned sake making, and is now a certified sake master with his own line of the Japanese brew.

But for Damiani, “I wasn’t really designing, but only sharing my ideas, my style, and thought that they could make them into unique pieces,” he says.

What the ex-footballer had in mind were everyday, unisex pieces that would appeal to younger consumers.

“I thought of leather with diamonds, which I’ve never seen on the market, even from Damiani,” he says. “And then there’s the cross, which has also become a fashion symbol, not just religious. Damiani is fine jewelry, so it’s not skulls and diamonds.”

Nakata acknowledges that most men are shy about wearing jewelry—save for, say, their wedding band—but he also points out that up until a few years ago, men also didn’t use cosmetics or skincare products.

“Now men’s cosmetics are so big. Lifestyle is changing. More men are starting to take care of themselves. It will be the same with jewelry,”

Globally, the demand for men’s jewelry began about five years ago, especially in Asia, says Giorgio Grassi Damiani, CEO of Damiani and vice president of the Damiani Group.

“Men used to be very classic with their fashion,” says the jeweler, “but now that’s changing. They’re now approaching jewelry in a new way: as an accessory. Women have always worn jewelry as an accessory, not just to mark a milestone, like their engagement or wedding. Men now are doing the same.”

Nakata and Damiani are wearing identical stacks of bangles—the style icon, in his jeans; and the CEO, in his power suit.

“It’s something for every day, whether you’re wearing jeans or a suit,” Nakata points out.

A portion of the sales from the collection goes to Nakata’s chosen charities aligned with his foundation called Take Action. It was one of the conditions of his partnership with Damiani.

In May, the athlete joined the jeweler on a trip to Uganda for the Clean Water Project, where they built wells for the locals, an initiative Damiani has also done with actress Sharon Stone.

“When I do charity, I’m not helping anyone, I’m helping myself. I get more than what I give,” says the athlete.

Nakata lived in Italy for many years when he was playing pro football. But it wasn’t after he retired 10 years ago that he met Damiani. They bonded over shared passions for design, travel, food, and fine wines.

A few years back, Damiani invited the Japanese star to the company’s factory in Valenza, and got the latter’s interest piqued. Next year, they

will launch the second installment to their design collaboration.

Nakata’s approach to style is well-rounded. “It’s not just fashion, but what you see, who you meet, architecture, arts,” he says. “It’s an expression of your sense, not just your fashion, but your own beauty. When you travel you get inspiration. Luckily I travel a lot, I see many things to be inspired by.”

On being compared to Beckham, the British style icon and fellow ex-footballer, Nakata says: “I don’t care. I don’t want to talk about myself. I’m happy when people say I’m fashionable, but I don’t think I’m fashionable… I spend money on fashion. I know who designs well because I have many good friends in the fashion industry. I know some genius people. I learn from them. I try to be stylish, of course.”

(Nakata visited the Philippines quietly 10 years ago, with friend and then-Balenciaga designer Nicolas Ghesquiere, now creative director of Louis Vuitton. Tycoon Ben Chan hosted dinner for them, where they hobnobbed with Imelda Marcos.)

Nakata, however, declines to dispense style advice to other men: “Football is the same. I don’t coach. I know I can improve my own game with my own skills, but I can’t tell people how to do it.”