Our Great Wall–away from the tourists | Inquirer Lifestyle 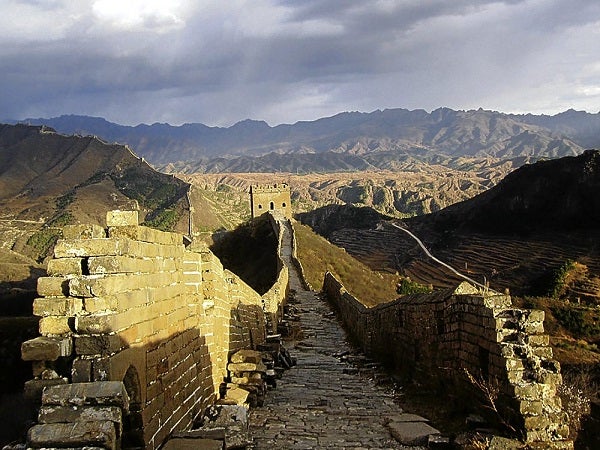 Our Great Wall–away from the tourists 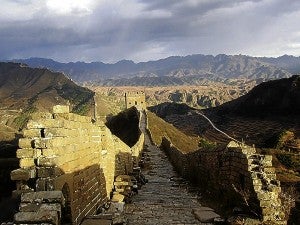 There was one thing we weren’t doing for sure. We were not going to see the Great Wall sandwiched between stalls selling stuffed pandas and postcards of the very thing we want to see live.

We would experience it in its purest form: old, grand, real, ideally still reeking of mad Mongolians and marching Manchurians, invaders, emperors and angry northmen.

We refused to see the greatest wall on earth blanketed by people shuffling in large groups, waving multicolored banners. We were determined to avoid the Badaling pass, the most visited section of the wall, at all costs, even if it is the easiest and most accessible way to do it: Practically all hostels offered a tour for about RMB 200, including tickets. All you have to do is hop on a bus.

Because we imposed it upon ourselves, the next few days were spent buried in online blogs and forums, meticulously copying key locations in both English and quivery Chinese characters. We checked out bus stations and confirmed routes via our ratty Lonely Planet guidebook.

We looked at international youth hostels in the area, certain we would spend the night somewhere near the wall. 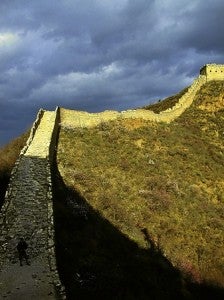 And, nearing the day of the great Great Wall trip, my friend and I began to stock up on supplies.

R and I would do the Great Wall hike from Jinshanling to Simatai, a 12-km or so trek up and down mountain ridges both sloping and steep, some parts completely exposed to 500-m drops on both sides, walls and foot path worn and crumbly, rubble here and there, and dramatic gusts of wind determined to blow hapless tourists off their weary feet. (Of course, except for the part about it being a real long walk, we did not know any of this just yet).

Our first point of destination was the Dongzhimen long-distance bus station to get on the bus to Chengde, which would pass by a point a few kilometers away from the Jinshanling entrance. Now, where that point specifically was, we weren’t too sure, but the knowledge alone that it existed was enough.

We criss-crossed the large bus station, poked my written Chinese version of the word Chengde in people’s faces, and received looks of fear/confusion.

As we have been sufficiently warned on several online accounts, a woman sniffed out our Great Wall plans and began herding us toward the “right bus.”  Had I not just spent a good chunk of the last five days Googling phrases like, “Great Wall tips,” we would’ve unwittingly got on.

Apparently, once you take this bus (it heads toward Simatai), a group of “tour operators” will board the bus at a certain stop, announce it was time for Great Wall passengers to get off, and subsequently force tourists to go the rest of the way on their cabs—at insanely exorbitant rates. 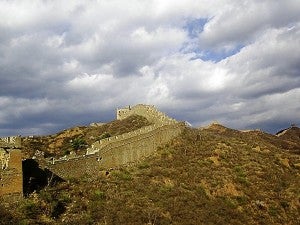 The hustlers would claim it was the only way to get to the Wall, and because you’d been forced to get off much earlier than the real stop, they’d be correct, too. Ha. Foiled!

We finally found the right bus, confirmed a million times by the driver, the conductor, and everyone sitting around us. “Chengde?” we asked over and over in our fake Cantonese accent.

A couple of hours later the conductor excitedly gestured that it was time to disembark. He pointed us down a road and we stumbled out, a little miffed as we were made to pay RMB 150 each, which was definitely too much. I wish I had copied down the Chinese characters for “fraud.”

After some symbolic picture-snapping, the Great Walk began. 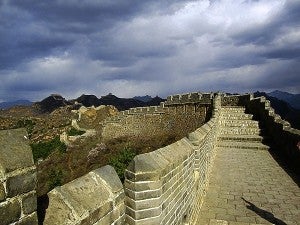 It took us about 30 minutes to cover the road to the entrance, and we paid RMB 50 to get in. The beginning of the path looked normal enough. There were some souvenir stalls, a couple of groups, a team of serious photographers, and a few vendors whose ears pricked immediately upon our arrival. They would be the last people we would see for a while.

As we have been sufficiently told to expect, the wall is breathtaking beyond any word, any photograph. As we left the more tourist-y sections and the real age of the structure began to show, we began to walk slower, partly due to respect, mostly because some sections of the path were starting to crumble.

The watchtowers, thousands of feet above sea level, loomed every few kilometers before us, and we entered every time we could, cautious of the high walls that seemed ready to topple down any time, strong winds not helping.

In fact, the temperature conveniently decided to drop just as the path started to become more sinister, more Mordor-like. A hundred thousand ghostly eyes then blinked open, and the bones of a million workers who died building the wall crunched vengefully beneath us. The sun began to grow paler, the shadows deepened. Worse, the biscuit supply was running low.

At one point, we had to traverse a narrow conduit with nothing to grab on for support: an overly eager step would have resulted in an overly eager plunge.  The wall stretched on; we were surrounded by danger, beauty, legend, and lore. 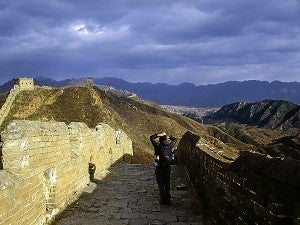 Just as we were starting to believe we would definitely need to curl up inside one of the haunted watchtowers for the night, depending on our flimsy arms for warmth, we saw a town a few kilometers below. It was the first sign of human civilization since we left Jinshanling some six hours ago.

Wildly relieved, and thankful that we would not be walking what felt like another thousand kilometers, we began hugging and kissing the stones, who, we felt, hugged and kissed us back. Or simmered angrily within, I’m not sure. They were, after all, built to keep strange people out.

We had crossed over to Simatai (the ticket booth was empty though, it would have been another RMB 50 to pass through) just as the sun was beginning its descent. And the walls, bathed in the sinking orb’s orange, suddenly became even more beautiful.

Suddenly I wanted to continue walking. There were still hundreds of miles of stone to see, thousands of kilometers of towers, hundreds of centuries more to traverse. But the path we took led us down, across a blue green river, over a bridge, back to the boring concrete roads of the present and toward a sign proudly promoting its Cold Bear (I think they mean beer).

R and I soon found a hostel, manned by a dollish little lady, and we proudly flashed our International Youth Hostel membership cards. We got put in a dorm for eight, but we were the only ones in the entire room.

For dinner, we walked out and found a little restaurant whose owners seemed ecstatic to actually have people to serve.  One old woman tried to sell us a book on the Great Wall, and I tried to explain that I’d absorbed all that I would need from the experience, but all she seemed to have deduced was that I was cheap.

Back in the hostel we tried to figure out the showers in the bathroom (we were still the only two people there), the television (we got two channels to work), and immediately fell into a deep, restless sleep. My dreams were more surreal than usual.  I should have guessed. After seeing the world from the Great Wall, the subconscious, most of all, would never be the same.