How to achieve that coveted dewy Korean look | Inquirer Lifestyle 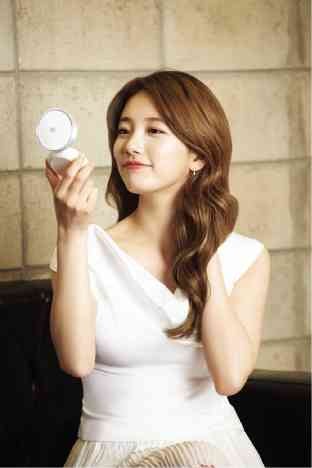 K-pop star Suzy Bae is the face of The Face Shop.

How to achieve that coveted dewy Korean look

“They don’t like powder. They don’t like the matte look that Filipinas prefer,” says Marge Apacible, the chief makeup artist and training manager of top Korean beauty brand The Face Shop.

Proponents of the fresh, dewy look, Korean women use “cushion compacts” instead. A cushion compact is that nifty multitasking treatment-makeup base-foundation-sun protection-in-one product that sits on a moist cushion sponge, and comes with a specially designed puff applicator.

“Unlike Filipino women who put on their foundation in the morning and only bring their powder compacts for touch-ups throughout the day, Korean women bring along their cushion compacts,” Apacible adds. “They like that all-day radiant, healthy glow, so that’s what they use for touch-ups, as well.”

When The Face Shop’s CC cushion compacts launched in the Philippines, they sold out so quickly that its local distributor, Suyen Corp. (Bench Group), had to overnight an order to fill the demand, according to brand manager Keti Maderazo. The Korean brand has such a cult following that “we always underestimate the market’s reception,” she adds.

Makeup bases account for half of The Face Shop’s Philippine business, according to Maderazo.

While there are other Korean beauty brands in the Philippines, Maderazo claims The Face Shop is the market leader in CC cushion compacts, owing to the number of variants available for every skin concern. Among them are the Oil Control Water Cushion SPF50+ PA+++; the CC Cushion SPF50+ PA+++ in Intense Cover and Ultra Moist; and The Therapy Anti-Aging Cushion SPF50+ PA+++. Each comes in various shades.

This month and in November, The Face Shop is rolling out a series of CC cushion compact cases in collaboration with Disney and Kakao

Apart from their ease of use, cutting down women’s typically time-consuming makeup routine by several steps, each CC cushion is also formulated to suit women’s varying skin concerns.

“If you insist on using powder, lightly apply it only on the areas that tend to get oily,” Apacible advises. Or, go for the Oil Control Water Cushion, which is sweat-proof and perfect for humid weather.

Cushion compacts can also be used to softly contour the face, like Koreans who are obsessed with a narrow face, says the makeup artist. Just use a darker shade on the “V line,” the area from under the cheekbones down to the chin. The same can be used on the sides of the nose to create a narrower outline.

Koreans don’t like hard definitions, such that even their eyebrows are not overly arched and shaped like in the Western style of makeup. They simply fill in the sparse gaps with a brow pencil. Neither are lips clearly outlined.

Theirs is more natural versus the Western look, Apacible says, and that begins with their dewy, powder-free complexion.