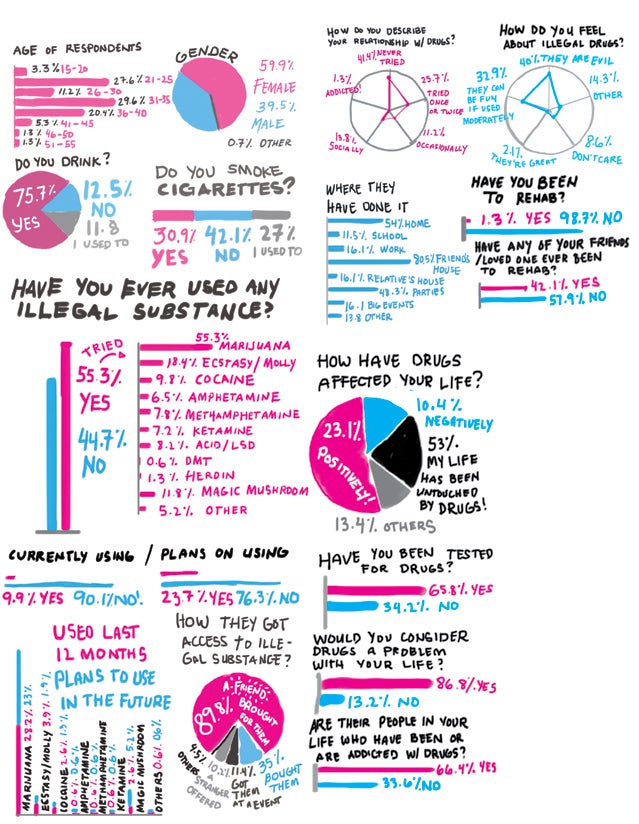 We asked 152 people between the ages of 15 and 55—a mix of students, writers, NGO workers, marketing officers, chefs, government employees, stay-at-home moms, graphic designers, doctors, entrepreneurs, salespeople and other professionals—have you ever used any illegal substances?

55.3% said yes. With the war on drugs a constant topic in the news, on social media and at the dinner table, we wanted to know what role illegal substances have played in the lives of people.

42.1% believe drugs are evil while 32.9% of our survey respondents said that drugs can be fun if used moderately.

98.7%of the respondents say they have never been to rehab, 42.1% said they have friends or loved ones who have undergone rehabilitation.

Kwan Doe, a musician, said he stopped taking drugs because “It was destroying my life in more ways than one.”

Jose, a software developer, said, “It was only fun for a while.”

T, an entrepreneur who claims to have been hooked on drugs before, said, “The higher you get the harder you fall.”

“What a person of legal age and of sound mind puts in their body is their business,” said Bernie, who works in creative.

When it comes to the war on drugs, the respondents are divided.

“I support it,” said Jojo, an executive.

“It is necessary,” said Robert, who works in marketing.

“It’s scary but in a good way. We need to be disciplined,” said Lycelle, a call center agent.

“I’m fine with it. As long as innocents are not caught in the crosshairs,” said KBex, an account manager.

“We are just not used to that type of treatment. Maawain kasi tayo masyado (we’re too kind),” said Nom, a manager.

Sharky, a manager, believes the drug problem can’t be solved. “It can only be controlled.”

Hongtandakonah, a programmer, agrees. “That is like asking for the eradication of the common cold. I would rather opt for it to be contained, by perhaps secluding people in a remote place for those who have chosen that kind of lifestyle. And educating people aggressively on making choices in life.”

“Destroy the drug chain, but from the top down so that it does not feel like selective justice,” said bananaflutternutter, a journalist and church worker.

“If a drug user is addicted, they will find a way to get drugs, even if it’s illegal, even if they may get killed. Education on drugs, I think, is the best route to take,” said Martin, a manager.

“Treat it not only as a criminal problem but a social and health problem,” said Adrian, who is self-employed.

“Go to the root of the problem… Drug use is a symptom. Find the cause,” said Qix, employee

“(It) has to be a 360 (degree) approach. Get the source, get the pushers. Give rehab programs for free. Livelihood to those who are in rehab. Better police force (who are not involved in drugs). New laws and strict  implementation,” said Kulot, a brand manager.

“The administration is putting a great deal of effort to stop illegal drugs from spreading. I hope they come out victorious. Their victory is the victory of the Filipino people also,” said