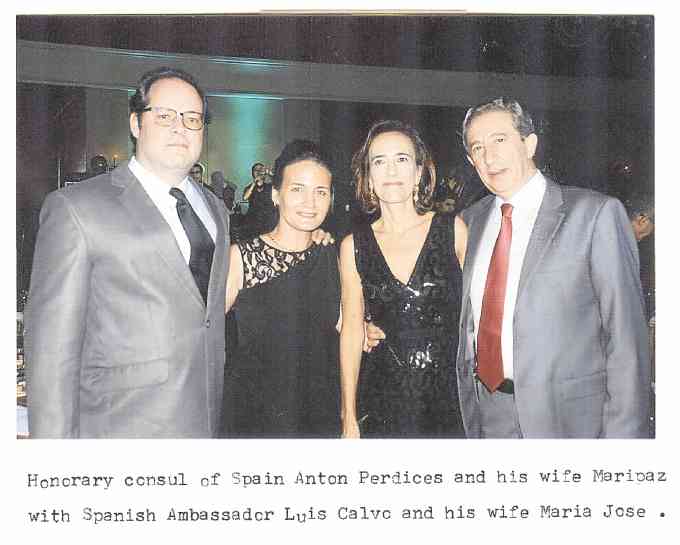 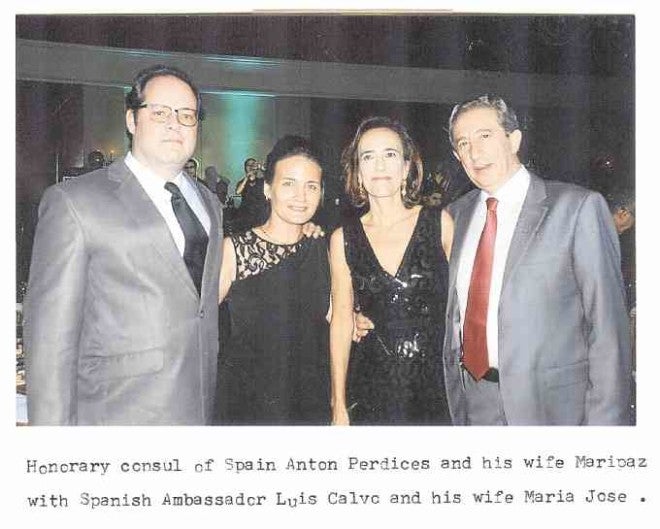 Spanish Ambassador Luis Calvo came to Cebu with his wife Maria José and their son Lain for the celebration of Dia de la Hispanidad at Casino Español de Cebu.

Date chosen was Oct. 8 as it was the closet Saturday to Oct. 12, the actual “Dia.” They arrived in the morning and were billeted at Marco Polo Plaza Hotel.

Accompanied by honorary consul of Spain in Cebu Anton Perdices and his wife Maripaz, the Calvos attended the anticipated Mass officiated by Msgr. Achilles Dakay which ushered in the festivity.

This was followed by a reception at Casino Español’s Salon Granada where they met many of the guests. Some of them they already knew from their visit for the same occasion last year.

May Ocaba, general manager of the club, was congratulated for the magnificent “pica-pica” spread featuring Spanish favorites, best of all the delicious jamon serrano being expertly out by one of the Casino’s specialty chefs.

At 7:30 p.m.,  the elegant crowd proceeded to the foyer of the grand ballroom, Salon de España, for the doors to open, and get a good seat, the rule being first come, first served.

In the reception line to welcome the guests were the officers led by president Luis Moro III and his wife Lynn; secretary Edgar Chiongbian and his wife Cely; and treasurer Renato Kintanar and his wife Joy.

Beaming with family pride was Luis “Kiting” Moro Jr., a former president, and father of the current president. Another former president present was Glenn Loop, now the United States’ consular agent in Cebu.

Also glowing with family pride were Mariano “Tintoy” Perdices and his wife Maricar, parents of Consul Anton Perdices. They sat with Vic and Toots Torres, and Lisette Garcia.

There were speeches by Luis Moro III, and consul Anton Perdices who introduced Ambassador Calvo. In his speech,  the ambassador mentioned that the year 2021 will be very special for the Philippines and Spain, as it marks the 500th year since Spain came to this part of the world. “It was in Cebu,” said Ambassador Calvo.

Buffet dinner was served at Salon Madrid with the best the club has to offer. There was a series of Spanish-inspired dances, Las Vegas-style.

For the rest of the evening the Renaissance Band was at its best with a catchy repertoire that had most of the crowd dancing to their hearts’ content. Quite cool doing the disco beat were Joe and Rita Suaco.

This ball has just started the ball rolling for Casino Español de Cebu’s holiday season. There will be the usual “Cestas de Navidad” dinner and raffle of Christmas baskets and other prizes first week of December.

Christmas Eve and Day mean special dinner buffets, and on Dec.  31 is the traditional costume ball to welcome the New Year. The season closes with the Feast of the Three Kings on the first Sunday of 2017, with gifts for the members’ children and grandchildren.