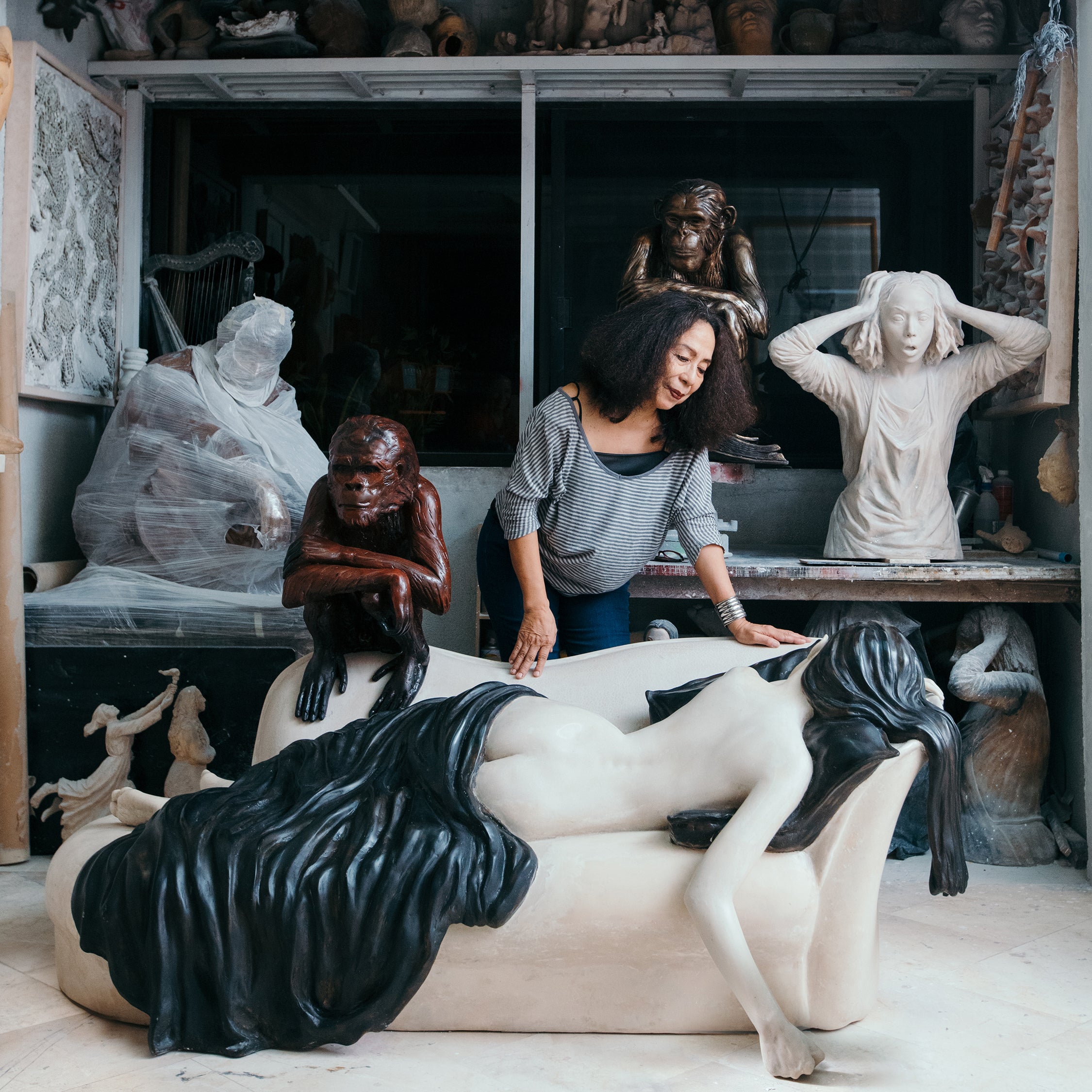 Julie Lluch’s sensual art blossoms ‘In the Fullness of Time’

For the first time, Julie Lluch, acclaimed for her terracotta sculptures and bronze monuments, is exhibiting works in her new medium—cast marble with acrylic pigment—via “In the Fullness of Time,” at the Tall Gallery of Finale Art File in La Fuerza, Pasong Tamo, Makati, Nov. 7-Dec. 3.

It will be eight years after her “Yuta: A Retrospective” at the Cultural Center of the Philippines, which showcased an amazing array of terracotta artworks span 30 years of her personal, political and spiritual life.

Not that Lluch took a break in those eight years. That’s a big no in her soulful and passionate life. In fact, the seeming gap was spent doing commissioned works, mostly public art bronze statues and monuments of our nation’s heroes and statesmen.

She made statues of Jose Rizal in Calamba, Laguna, and in Dapitan, Zamboanga del Norte; Andres Bonifacio and Gregoria de Jesus in San Juan, Metro Manila; and Francisco Balagtas in Orion, Bataan.

Among her favorite works were her statues of Mayor Arsenio Lacson along Roxas Boulevard; former budget secretary and representative Butch Abad’s parents in Batanes; Apolinario Mabini in Tanauan, Batangas; and President Manuel Quezon in Baler, Aurora.

She considers it a rare privilege for a sculptor to serve one’s country and give honor to the country’s patriots through her art.

Julie Lluch once again describes and defines her philosophy and spiritual persuasion in her new solo exhibit. “In the Fullness of Time,” she says, “conforms with the fact that work will soon be through, all in God’s perfect time, and purpose, too!”

Four out of the 15 or so artworks are major pieces grouped under the title “Kairos,” an ancient Greek word which means the right or opportune time.

The title piece, “Kairos 1,” modelled by Kiri, is Lluch’s statement for the whole show. It shows a woman with a book sleeping on a burning couch.

Sari is the woman in “Kairos 2,” which shows her texting after stepping out of the shower room even as one of the sandals she wears has caught fire.

In “Kairos 3,” a woman modelled by Aba strums her ukulele, unmindful of a monkey on her back pulling her hair while another monkey’s tail is on fire.

The three women are frozen in earthly “chronos” (Greek for sequential time).

Lluch, a self-taught artist who’s an alumna of the famous old Faculty of Philosophy and Letters (better known as “Philets”) of the University of Santo Tomas, says, “Kairos is God’s opportune time that intersects with human temporal affairs such as the insignificant moments when we sleep, read a book, play music or send a text message by cell phone.”

Why the fascination with fire? “Fire is an essential element of worship in the Old Testament. The artist offers their all to the altar of art. God brings fire that consumes the sacrifice if it is acceptable to Him.”

From another perspective, the feminist turned Christian artist declares that “the Kairos pieces may be viewed simply as sensuous depiction of a woman dreaming, perhaps in the magic realist style. Isn’t the ‘Ecstasy of Saint Teresa’ by the 17th-century sculptor Gian Lorenzo Bernini both religious and sensuous at the same time?”

An exhibit piece which Lluch takes pleasure in is “Night Spa with Lorca.” It shows an ape perched on a couch where a half-naked woman lies.

The statue is really Kiri having a massage, says Lluch. It is “an artwork about art—in its deep, dark and gothic sense.” The artist was reading Lorca at that time and she felt dazzled and enamored by his “spirit of the earth.”

The Apostle Paul and Gustav Mahler also served as Lluch’s inspirations for this exhibit. But it is classical music that influenced her art the most. Her romance with Beethoven and Mozart started when her father Pacificador introduced them to her when she was but a 6-year-old girl in Iligan City. It has become a life-long affair.

She exclaims, “I am delighted and thankful to Classica Channel on TV to which I listen all day.”

Lluch notes that her dalliance with terracotta, the pleasure she gets from clay, has not ended. She will still carry some terracotta pieces in the exhibit. After all, it is clay that radically changed her life.

“I enjoy making those thorny Heart and Cacti sculptures which I do over and over like etudes and exercises for my fingers that made them strong, nimble and carefree,” she says.

Most of Lluch’s works are autobiographical and give her much satisfaction. She considers “Picasso y Yo” as her favorite. “In it, I rolled into one the multitude of overlapping identities and roles that I have as a woman, wife, mother, artist and feminist in protest against high art represented by Picasso and patriarchy.”

As a mother, Lluch is proud of having given her daughters freedom to find their place in the world. She says, “I myself had an exceedingly free and happy childhood. So, I allowed my daughters to climb trees, go to the river and play around the neighborhood with the rough boys. Deep down inside, however, I cried to God for help because it is risky and precarious to trust the young with precious freedom. But God has always been good.”

For Lluch, this exhibit has given her happiness, not only because she enjoyed what she was doing but also because of the interaction and bonding she had with her daughters as they sat in as her models.

“As grown-ups now with careers of their own, their ideas and mine often jibed. It is joyful to collaborate and work together in equal terms and as artists. I always tell them to use only the best, no matter what the cost.”

Lluch thinks artists these days have never had it so good. The market is fast developing. But she is shocked with inflated prices in auction houses which, to her, might send wrong signals to young aspiring talents.

“Art is not about selling,” she says.

“Undoubtedly,” she adds, “there is an overflow of dazzling talents and great diversity of artistic expressions. Philippine art, both visual and plastic arts, is vibrant, audacious and competitive. Many artists however are distracted, maybe because of their unlimited access to technology and the inundation of information.”

Still, her advice to them is “to not quench the fire!”

Aside from “In the Fullness of Time,” Lluch is one of two Filipino artists, with Alwin Reamillo, representing the Philippines in the Southeast Asia Plus Triennale 2016 in Jakarta, Indonesia, Oct. 18-Nov. 10.

“I am looking for art that one can contemplate on, that evokes beauty, rest, timelessness and a sense of the divine.

“Yes, I do look for God in the art gallery,” declares the quintessential artist. —CONTRIBUTED