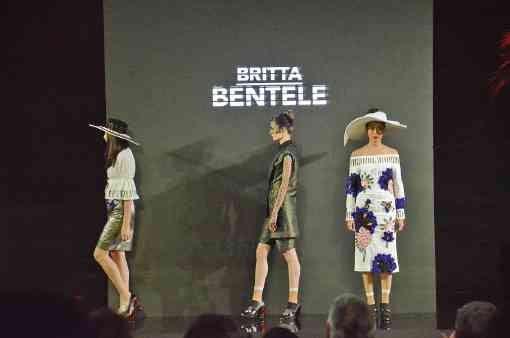 Britta Bentele breaks the monotony of her tailored looks with appliqué ornamentsmade from fabric scraps.

Are designers overproducing in fast-fashion system?

Fashion seems a rather unlikely field for the Netherlands and the Philippines to partner on, at the outset. However, the coming together of the diverse cultures and aesthetics of the two countries proved to be quite fruitful, as friends of the Embassy of the Netherlands here witnessed last week.

It was the result of a fashion academic exchange between Manila and Amsterdam.

The young women visited embroidery centers in Lumban, Quezon and Tagaytay, and even trekked to Divisoria to source fabrics.

In July, three designers from Slim’s—Damaris Chua, Riza Bulawan and Nina Gatan—flew to Amsterdam to attend the Mercedes-Benz Fashion Week, take up an intensive course on tailoring, and have a meet-and-greet with Dutch fashion press, and the movers and shakers of the Dutch fashion industry.

It was incidental that all six were women, says Iris Ruisch, creative director of Mercedes-Benz Fashion Week Amsterdam. They were chosen for their talents.

With the mentorship of Rachid Naas, cofounder of Fashion Council NL, the six women put together a capsule collection that was presented in Manila Thursday. The theme was “Innovation for Sustainability.”

In her speech at the event, Netherlands Ambassador to the Philippines Marion Derckx underscored how this generation of fashion designers from both countries could mine from their exchange, opportunities for sustainable designs for the future.

“In this generation of designers, sustainability is normal aspect of the design process. It’s part of their DNA,” says Naas. “It’s not just about

sustainable fabric, but also about the way they work… In Holland, most academies focus on special projects, advanced technology and techniques, recycling, upcycling. It’s not a trend! It’s actually a task for the new generation to solve a problem that we couldn’t solve. Now they have more machines and ideas how to do it.”

He adds, “Most designers in Holland, Belgium and Germany, they try to get rid of the [current fast-fashion] system. They don’t want to overproduce. They don’t want to stick to seasons. They make a collection and every time, they’re just adding… As soon as more designers are doing this, the consumer will become more aware as well.”

Naas was impressed with the three Filipino girls’ eagerness to learn. Their strength, he noted, is in tailoring.

“They got more confident about their design. In Holland, we’re very focused on concept. Sometimes a design doesn’t end up on a man or a woman but in a museum,” he deadpans.

“The Filipino designers’ strength is technique and their love for fashion. They worked day and night. What they told me after their trip to Holland and two days in Paris—you know, for inspiration—it opened up their eyes in how they look at women. They see more possibilities in how to dress women. Because here, when you go out in the evening, women dress up in tight clothes. Now, they’re more eager to make looser eveningwear.”

Ruisch says, “The more successful designers in Holland and Belgium, they’re not just entrepreneurs, they also work at labels and retailers, to get the experience.”

On the side, “they develop their own collections,” which, she adds, is a realistic approach if one wants to survive in the current retail climate.

The Netherlands is a “country of casual wear, we’re very practical,” says Naas. This amazed the visiting Filipino students, “that people in Amsterdam were in loose, fuss-free clothing. They’re career women, but they also have to ride a bike.”

But he admitted that there’s no simple way to describe the Dutch aesthetic, such that the recent research of some Dutch fashion journalists to answer a similar question resulted in a really thick tome.

“The Dutch are well-known, for hundreds of years, for trading. We do business, but we also have a creative mind, plus good education, and these have always helped us in any kind of field,” Naas says.

“For fashion, we have very good marketing skills. Globally, many Dutch are working in brands and schools. The Dutch are philosophers of fashion in a way. Together with the Japanese, we are really good in strategy.”

He adds, “If other people saw Dutch people on the street, they would say we’re colorful and loud, and experimental. Also, we’re very practical because of our Calvinistic way of life.”

The color that Naas talks about shone through in the collection of his six wards. While they would each design according to individual aesthetics, they all agreed on a palette, which consisted of bright reds and blues.

One of the Dutch girls, Ankersmit, put together the only men’s collection, inspired by the jeepneys of Manila.

Naas is optimistic about the future of young fashion talents, as he foresees a changing retail landscape.

“All cities have the same stores. And I see that what used to be will come back,” he says. “Meaning, there will be more ateliers where you can buy something unique. In the 1990s, when you visited Berlin or Barcelona, you could buy something, and when you went home and people noticed, you could say you bought it in Berlin and you know nobody else could buy it. Now everybody can buy it anywhere.

“That will come back. It will help the young designers.”