Istanbul: Take it all in, from the mosques to the bazaar | Lifestyle.INQ ❮ ❯ 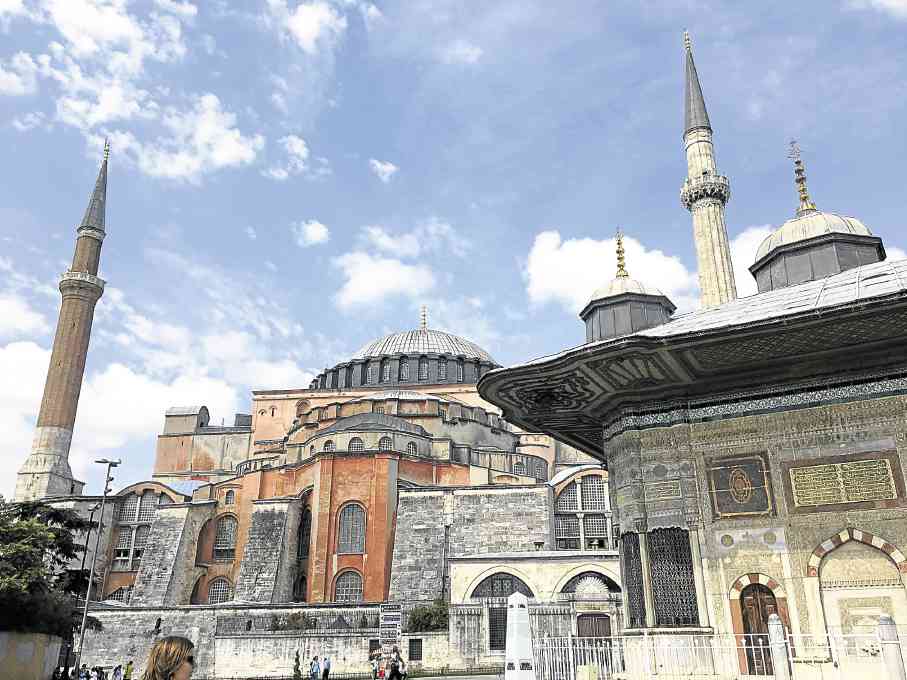 Istanbul: Take it all in, from the mosques to the bazaar

We sail down the Bosphorus Strait, a natural waterway that splits Istanbul into Europe and Asia. Even without a tour guide, we can identify the continents by the distinct Western and Eastern architecture on each shore.

Passing under the intercontinental Bosphorus Bridge, we spot a Turkish flag waving proudly, as if to remind us that Turkey unifies it all.

This fusion is the foundation of Istanbul—the transcontinental Turkish city of crossover cultures where East meets West and, in the past, where Christian met Muslim. With an enchanting history, this bustling metropolis is irresistible to travelers.

And despite declining tourism in the neighboring Middle East, just last year Turkey was ranked as the sixth most popular tourist destination in the world.

Historically, Istanbul has always been sought after. Standing testament to this is the Hagia Sofia, built as a Byzantine cathedral, then converted into a mosque. Its massive original Christian dome is surrounded by thin Muslim minarets. Today, Hagia Sofia is a museum where architecture enthusiasts can visit both lavish Christian mosaics and tombs of Ottoman Sultans.

Stepping outside of the Hagia Sofia gives us the perfect Instagram picture of the famed Blue Mosque. Even from afar, a man from the mosque can be heard calling all Muslims to prayer.

As we approach the mosque, we see the outside wall lined with men seated in front of fountains to wash their hands, forearms, faces and feet before entering to pray. Visitors are given cloths to cover our heads and legs. We are also asked to remove our shoes before we step into the carpeted mosque.

The Blue Mosque offers visitors a glimpse of the Muslim faith. Inside, there are no chairs, tables or statues. The marble pillars draw our eyes up to jeweled lanterns, and to the 20,000 intricately hand-painted blue tiles that line the domed ceiling.

On the walls, verses of the Quran are painted in strokes with thick black calligraphy.

On the floor, Muslims bow down together in prayer.

The palace is structured in layers of massive green courtyards. We walk past marble walls with bright-colored tiles and tall golden gates to arrive at the innermost courtyard.

This is the palace’s highest point and the Sultan’s private dwelling place. Within this harem are apartments for his favorite wives and schoolrooms for the princes.

The grandeur is overwhelming, but the view of modern Istanbul overlooking the Sea of Marmara steals the show.

Also built by the Ottoman Empire is my favorite stop, the Grand Bazaar, located inside an ornate structure with tiled ceilings and marble fountains for the washing of hands and feet. The labyrinth of over 4,000 stores spills outside, onto the surrounding hills, where the deals are even more enticing.

Each vendor is armed with an assortment of hilarious pickup lines. Clever salesmen holding silver trays with fat slices of Turkish delight expertly identify our ethnicity and throw their Filipino vocabulary at us. “Maganda,” they call.

We’re overwhelmed by the assortment of Turkish coffee, stained glass lanterns, delicate jewelry and souvenirs decorated with the Evil Eye.

Deep inside the heart of the bazaar, an eager vendor lures us into his shop, where they sell the famed Turkish carpets. In Turkish hospitality style, they ask us to lounge on their couches, handing us piping hot apple tea. They chat politics against a backdrop of stacks of heavy rugs in shades of sapphire, crimson and olive, with intricate patterns and striking icons. For their hospitality, they only ask that we admire their rugs, occasionally lifting one and reminding us that they ship worldwide.

In addition to Istanbul’s numerous historical attractions, the city itself boasts an excellent cultural and foodie experience.

As if that wasn’t enough to pull visitors to Turkey, Istanbul is now more accessible than ever. Taking advantage of Istanbul’s geographical location at the center of the world, Turkish Airlines has based itself in Istanbul’s Ataturk Airport and now services the largest number of origin and destination opportunities in the world.

For those who have layovers in Istanbul for six to 24 hours, Turkish Airlines even offers free tours to Hagia Sophia, the Blue Mosque, Topkapi Palace, the Grand Bazaar and Taksim Square. And after a day of touring, travelers can freshen up in the marble showers of Turkish Airlines’ modern two-floor lounge, complete with a golf simulator, cinema and open buffet.

While these amenities have earned Turkish Airlines a top ranking for business class lounging, future visitors can look forward to new facilities since Istanbul is building what will be the world’s largest airport. It’s no wonder Istanbul has now become a must-see stopover for Filipinos headed to Europe or Africa. CONTRIBUTED