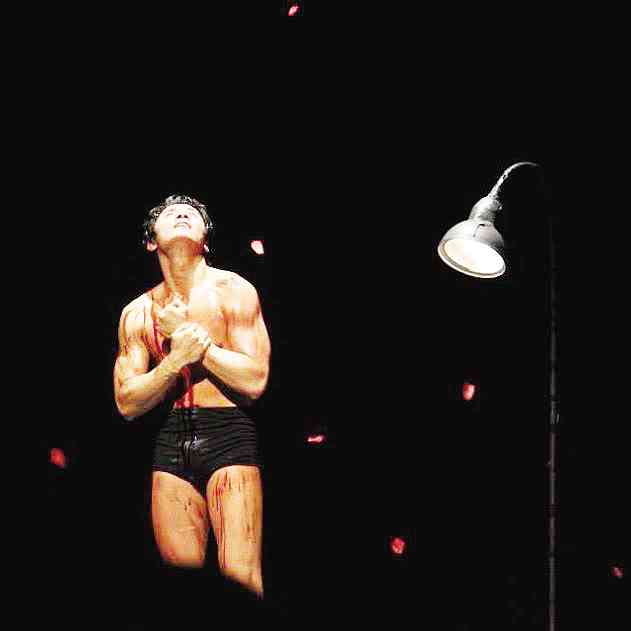 In 2007, some upper-class Certificate in Theater Arts students of the University of the Philippines (UP) were talking about this incoming freshman—a good-looking boy from Pampanga who had acted for Sir Tony Mabesa’s plays at Angeles University.

That boy was JC Santos. One would think it would be easy for someone of his looks and seeming talent to immediately land big roles on stage. But this is Dulaang UP, where you have to prove yourself and work your way up to get a shot.

And he did. He landed his first role in his freshman year as Silvius in “As You Like It/Paano Man Ang Ibig,” directed by Jose Estrella. In that play, he immediately showed potential as a lead actor.

For the next production, he was cast as a member of the ensemble in Sir Tony’s “Pasyon ni Kristo.” And then we discovered he could sing and move even without formal training when he joined “The Silent Soprano,” a musical directed by Alexander Cortez.

He pursued his passion for acting despite his academic requirements, including his Theatre 110 subject (a theater practicum class taken for three semesters from freshman year) where he was tasked to do backstage work, marketing, publicity, etc. He even worked as part of what we call refreshments staff, preparing water and ice for the actors and staff.

I also recall JC, with his other practicum classmates, staying overnight at our house to achieve the tastas (distressed) look of the “Orosman at Zafira” costumes. Just like any other Theater Arts major in UP, he went through the rigorous DUP training.

When I was commissioned to do “Orosman at Zafira” in 2008 for the National Komedya Festival, all the roles had been precast. But I needed triple threats. For the character Zelim, the young and fierce leader of the Duquela tribe, I envisioned JM de Guzman and JC Santos to alternate in the role.

But I did not precast them. As my students, I wanted them to work hard for the role, so I asked them to audition. JC came prepared. But what was very striking was the fire in his eyes and the hunger he showed.

Initially, he had some bad acting habits common among beginning actors. My pet peeve is the speech pattern, where an actor delivers his lines in a sing-song pattern because of a lack of understanding of the text.

JC looked the part, and perhaps he relied on that. He would resort to attitude without depth, something I call “epidermis acting,” putting up a façade and not coming from something within. I wanted him to understand that he was acting with the likes of Cris Villonco, Arnold Reyes, Felix Rivera, Maita Ponce and Lex Marcos—all seasoned theater actors. So I really pushed him, because I wanted him to be at par with his co-actors.

I distinctly remember that, in one of his scenes as Zelim, he had a few lines before his solo song. But because of his speech pattern (the text was by Francisco Balagtas—a challenge indeed!), we spent much time on scene work. In the end, I decided to cut his lines.

I learned from his friends a few years later that he cried backstage, saying, “Hindi ko na alam gagawin ko.” He struggled, because it is very hard for young actors to unlearn bad habits on stage. And I was keen on giving him notes and pushing him some more.

But, I will say this of JC, he accepted the challenges and fought with all he had. When the show opened, Zelim became an iconic character of the reinvented komedya because of his performance.

In 2009, I directed an all-male cast of Frank Wedekind’s “Lulu” (Filipino translation by Joel Saracho). He played the role of Alva Schon, a young and passionate director who falls in love with Lulu. He performed alongside Tuxqs Rutaquio, Andoy Ranay, Paolo O’ Hara and Alex Cortez.

At a very young age, he took on a role in a very heavy production with a mature theme that included kissing, sex scenes and nudity. He knew I would not pamper or spoon-feed him. He came to rehearsals prepared. He made mistakes, accepted them, and tried his best to make up for them. Hopefully, he didn’t cry this time.

I was more than a professor to him. I wanted him to succeed because of his love of theater. Per our DUP training, I do not sugarcoat, I do not spoon-feed, I am brutally honest. And because of this, in time we built a mutual trust.

I was one of the first few people who knew that he passed the Universal Studios auditions. He worked there for some time, then transferred to Hong Kong Disneyland. He also told me about his plans to study at the Circle in the Square Theatre in New York.

I remember him texting me about his plans, his frustrations, the challenges he was facing. He has always had big dreams. If you ask his friends from DUP, they would invariably say he is such a hard worker, a perfectionist even. Besides his innate talent, he is very determined and dedicated—and, in many ways, that makes the crucial difference.

My most recent fond memory of JC was during the run of “Ang Nawalang Kapatid” when he had just arrived from New York. When he saw me, he gave me a tight hug. I didn’t have to ask him why he was back that soon. Of course I wanted him to finish his course there, but I was also happy he was back with us, in DUP and local theater. Finally, he was home.

He resumed doing the things he said he missed terribly when he was abroad. He was cast as Don Juan in DUP’s “Adarna,” and in “Bilanggo ng Pag-ibig” the following year. He did assistant-director work for Andoy, and we started seeing him in supporting roles on TV.

This time, I didn’t have to message him, “O, may play si Floy [Quintos]. Kelan ka uuwi?” Because he was finally here, where his heart belongs.

I give special thanks to people who give theater artists, especially our graduates, more avenues to express their art. We are happy to know that their passion, generosity and sincerity are reaching more audiences.

We are proud to say that JC got his start on the Guerrero stage in UP—just like Shamaine Centenera Buencamino, Irma Adlawan, Eugene Domingo, Candy Pangilinan, Harlene Bautista, Frances Makil-Ignacio, Stella Cañete, Andoy Ranay, Rico Gutierrez, Ayen Munji-Laurel, Neil Sese, JM de Guzman and all our other alumni who are now successful in various fields in the entertainment industry.

Like JC, in their time they painted sets, stitched costumes, assisted senior actors, sold tickets, contacted sponsors, listened to their directors’ notes—and took it all on the chin, eventually becoming the illustrious artists they are now.

I haven’t seen or talked to JC lately. I am sorry I have not been able to watch his new teleserye, which has made him TV’s newest sensation. But I hope he knows that I remain a proud teacher, friend and father. —CONTRIBUTED

Dexter Martinez Santos is the artistic director of Dulaang UP.