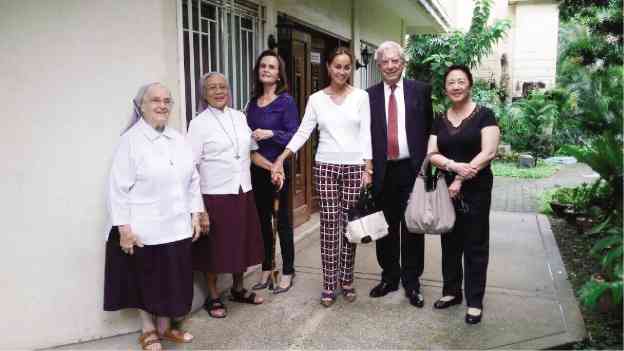 Only the Spanish celebrity journal “¡Hola!,” which dutifully chronicles the couple’s every move, came out with a report.

“This is, without doubt, a visit with as much significance for Mario as it is for Isabel, as she returns to the land of her birth for the first time with her partner…”

In the cover story, Preysler said the couple had no concrete plans to get married, but added “we could get married tomorrow if we wanted to.”

Falling in love at her age, she added, was “a wonderful surprise… a great gift of life at this point.”

For his part, the 80-year-old Peruvian-born novelist, who is in the Philippines upon the invitation of Instituto Cervantes, and is scheduled to receive honorary degrees from the University of Santo Tomas and De La Salle University, chose to keep a discreet silence about their relationship.

“Love is a fantastic experience, probably the richest that we have had, but it is private,” he told the press.  “When it becomes public, it impoverishes it. It becomes banal. Public expression of love banalizes love. So I don’t want to banalize this fantastic, marvelous experience. For me, it is and always will be private.”

The writer’s romance with the 65-year-old Preysler, perhaps best known outside Spain as the former wife of pop singer Julio Iglesias and mother of singer Enrique, caused a public stir last year when he left his wife of 50 years for her, declaring “now I feel what happiness is.” What time he had left, he said, he needed to spend with Isabel.

Preysler had been widowed only months before, after the death of her third husband, former Spanish finance minister Miguel Boyer, to whom she was married for 27 years.

The couple have been inseparable since Vargas Llosa’s divorce, with Preysler often accompanying the writer to his international commitments as a Nobel Prize winner.

Celebrated as much for her unfading exotic beauty and a jet-set lifestyle that has her rubbing elbows with European high society and celebrities such as David and Victoria Beckham and George Clooney, Preysler has lived a very public life ever since her marriage to Iglesias in 1971.

The former beauty queen and model has been a journalist and television host. She is also a well-known celebrity endorser in Spain, for Manolo Blahnik shoes and the design house Porcelanosa, among others.

One of the leading lights of Latin American letters and a public intellectual who once ran unsuccessfully for president of Peru, Vargas Llosa is himself no stranger to publicity, though hardly to the same degree as his partner.

The couple’s Philippine visit could turn out to be a well-earned respite from the limelight.

“This is a very, very low-profile trip,” says Inquirer columnist Maurice Arcache, a family friend of Preysler since childhood. “A big cocktail party for the Spanish community was canceled in favor of a more intimate dinner for 10.”

As far as he knows, says Arcache, the trip is a chance for Vargas Llosa to learn more about Preysler’s early life in the Philippines.

They are staying in a private home rather than a hotel, he added. Preysler still has family in Manila, including her sister Victoria and aunt Mercy Tuason, the country’s former ambassador to the Vatican.

As for the Filipinos’ enduring fascination with Isabel Preysler, Arcache says, “I would put her in the category of someone like Elizabeth Taylor, a very beautiful woman. She can melt your heart. Isabel has always been like that, even as a kid.”

Arcache has a picture of a woman who, as the song goes, falls in love too easily and always follows her heart.

“The cards just fell where they should go, the way her life went,” he says. “She’s had it all.”

In her teens and studying at Assumption, Preysler won a beauty contest. She was also dating Louie Ysmael, among other eligible bachelors, when she fell hard for future environmentalist Junie Kalaw, who was 10 years her senior, says Arcache.

“Her mother shipped her off to Spain because she was not too keen on Kalaw, who had the reputation of being a playboy,” he adds. “When she arrived in Madrid, there were two or three dozen roses waiting for her as she came down the gangplank.  But, of course, that romance died and she started meeting people.”

One of them was a recently retired Real Madrid goalie named Julio Iglesias, who had just embarked on a new career as a singer.

“Then it was goodbye Junie, hello Julio,” says Arcache. “That was when her world changed.  She fell in love with one of the biggest pop singers in Europe, adored by all the women around him, although only for a moment, him being the playboy that he was. That started the ball rolling.”

After eight years and three children, the couple divorced in 1979.

The following year Preysler married Carlos Falco, the Marquess de Grignon. The couple had a daughter, but the marriage was short-lived.

In 1987, she married Miguel Boyer, the socialist finance minister of Spain, who also left his wife for her. The union produced another daughter, and was apparently a happy one.

“When he would have a meeting in other countries, he would send Isabel ahead to soften up the people he would talk to,” says Arcache. “He would always get the deal.  That’s how charming she is.  She has the charm, she’s beautiful, and she knows her way around.

“In all of these there was love,” he adds. “But, of course, it helped that one was a pop star, one had a title, and one had financing.”

As for Preysler’s current relationship with Vargas Llosa, Arcache speculates:

“This time around it looks like a different thing,” he says.  “Apparently he’s very, very charming. I guess he has that golden tongue. I told her sister, ‘Tell her this time I wish her all the happiness she can get.’”