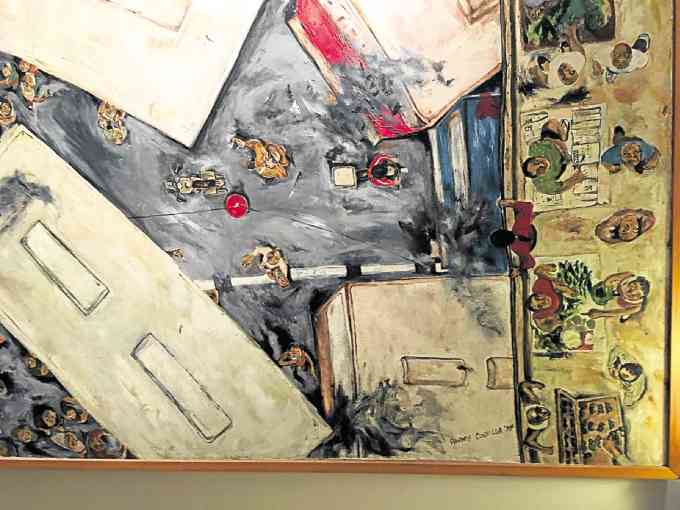 What is the point of being international when there is nothing national to be ‘inter’ about?”

Thus asked the eminent art critic Emmanuel “Eric” Torres in his “Comprehensive Survey: Philippine Abstract Painting,” published by the Cultural Center of the Philippines in 1994. Prefacing that question was, “One forgets that one of art’s strongest appeals is precisely that it has always been local.”

Elsewhere in that pioneering monograph Torres stated: “Pinoy Baroque… or that fear of emptiness (horror vacui)… reflects the grass-roots Pinoy taste… in his lifestyle, environment and decor.”

Since that was written over two decades ago, it may now be time to revisit these insights and apply them to measure the work produced by artists grown in such number today as to satisfy burgeoning demand from today’s young more affluent art collectors.

Horror vacui—the fear of empty space—more than just tendency toward surfeit of detail, it involves within its creative process a dialectic between plenitude and minimalism, restraint often finding resolution in its opposite—bravura and showmanship.

Google Lucban, Quezon’s Pahiyas festival, and see how deeply this has been ingrained in the Pinoy psyche. We have no better way to celebrate nature’s bounty than this, with every house fronting festooned with kiping in dizzying rows or formed into chandeliers, fruits, vegetables and all kinds of produce laid out in abandon amid which both San Isidro Labrador, the patron saint on his carroza, dressed sedately in a pale-blue tunic and maroon cloak, and the landowner in his suit of black kneeling before the saint, sedate, forlorn in the surrounding blaze and clash of colors.

Nowadays, every local/regional festival must have its own street parade. Dancers dress up in elaborate costumes to strut their choreographed routines downtown. All is loud exuberance—an extravaganza that’s almost always gay kitsch!

Being “Pinoy,” at its worst, means gaudy and overstated display.

Easy to spot in today’s art market are those paintings so overworked that they tend to confound the viewer with undigested style, crowding what’s theatrical with the pretentious and shallow.

At its best, assuming judicious technical control and care in composition, being Pinoy captures effortlessly the multicultural fusion of formative heritage—profound hallmark of our culture.

Happy example is found in the work of Pandy Aviado, when he combines the ethnicity of Indonesian batik with the geometry of our lumad weaving; or Bauhaus with the exoticism of Balinese architecture—a fusion that’s identifiably Asean.

Or with Edwin Wilwayco painting in mid-career (1999 to 2012), reveling in the foliate forms found in his garden, and in motives suggested by the music of Bach, Vivaldi and Gluck. And in Jojo Lofranco—reminiscent of American artist Cy Twombly in his avoidance of the formulaic while favoring asymmetrical, vague animal-like forms, scribbles and splotches suggesting a disjointed randomness.

Both artists owe their vivid color, texture, restless movement to an abstract expressionism one discerns as distinctly Pinoy.

Scanning the folksy are Tony Austria and Dansoy Coquilla. The latter’s claustrophobic, highly colored urban scenes of vendors, jeepneys, buses in helter-skelter traffic, with crowds of people wide-eyed, some, wall-eyed, but all staring upward into nothingness as if confused or asking for deliverance.

Sui generis are the paintings, reliefs and sculpture of Roberto Feleo. He deals with themes critical of the Catholic Church and bourgeois/illustrado mentality and of a native identity stunted by colonial experience, the realization of which we continue to repress today faced by the West’s global economic reach.

Here’s Bob Feleo, the Babaylan, in primal yet transcendent scream.

They are a few exemplars of being Pinoy in the contemporary art scene. There are others who typify this for sure. And the buyer’s personal taste will rule, of course, when purchasing art in today’s resurgent market.

But in this frantic milieu, it may be tempting to acquire pieces based on decor alone, or solely on price or what’s selling well at auction.

While for some this is valid enough (and this is not to say it isn’t) others may want to see works more culturally resonant hanging on their wall.

To fill this demand, perhaps expand and deepen discourse between artist and collector, would that in the “orderliness” of things, or in their orderly disorderliness, more visual artists find art’s anarchy resolved into transcendence, and through a defined, disciplined aesthetic renew their sensitivity to Filipino culture—the wellspring of our native soul!  —CONTRIBUTED

The author is a retired banker, a Palanca awardee for Filipino poetry and an art collector.