An ‘asPin’ shines on the stage of ‘Annie’ | Inquirer Lifestyle ❮ ❯ 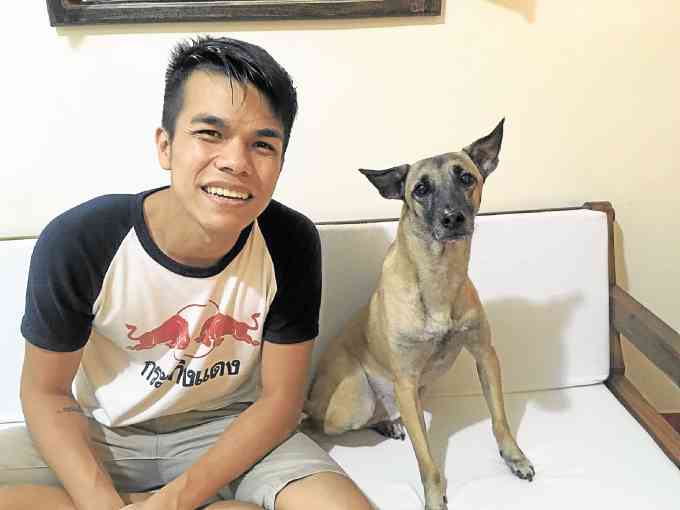 ‘HE CAN JUST BE A PET NOW’ Brad Feliciano and Alab chilling at home —ALYA B.HONASAN

An ‘asPin’ shines on the stage of ‘Annie’

The undisputed stars of the Manila production of “Annie,” the musical now on stage at ResortsWorld Manila, are the two young girls who play the lead, Krystal Brimner and Isabeli Araneta-Elizalde.

Alab has wowed audiences with his calm demeanor during shows, despite full houses, a loud orchestra, and the action on stage. Even director Michael Williams has been captivated by Alab’s portrayal.

Sandy, Annie’s dog, is, after all, a stray, and Alab’s tentative, shy response to Annie’s coaxing gives the dog a calm, almost poignant presence that complements that of the orphan girl.

“The behavior asked of him was nothing unusual for an asPin, but there were challenges, like all the people, the orchestra, and the ones who want a photo after the show,” Feliciano says. “Honestly, tumatakas kami because Alab gets scared.”

For Feliciano, lead instructor at the Better Dog Canine Behavior Center in Makati, the hardest part was turning over his dog to someone else. “I call it the courtship stage. It’s not about telling the dog what to do; he must willingly do what you want him to do, and for him to want to do it, he must trust you.”

That’s why the first two weeks of rehearsals were about developing Alab’s trust in his costars. “It was mostly playing, calling the dog back and forth, giving him what he wants.”

Even motivation, however, is tricky, as like most typical asPins who have developed survival mechanisms after generations of abuse, Alab has trust issues, and is not easily lured with food.

“This dog taught me more about dog training than all the books I’ve read,” reveals Feliciano. “I grew up with dogs who were driven. With Alab, I had to figure out how to get him to do what I wanted, how to make his fear disappear. I’ve cooked adobo for him, and he wouldn’t budge. He had to learn to trust me. A good relationship trumps food.”

Ironically, this dog was originally meant to be just an understudy to another dog, who dropped out of the production. Even if it was Feliciano who recommended Manlapaz and Tony, who were his students, Alab was supposed to do only one of four weekly shows—except that he did so well, Williams made him an alternate.  “We’re spoiled rotten backstage,” Feliciano says. “Even the crew is careful not to do anything that might upset or endanger the dogs.”

Alab is a lucky asPin, indeed. He was born in 2008 to a rescued dog at the Philippine Animal Welfare Society (PAWS) Animal Rescue Center in Quezon City.

Feliciano was a Fine Arts graduate of the University of Santo Tomas who also studied photojournalism, before setting his heart on becoming a dog trainer.

He started as a PAWS volunteer, training under Better Dog boss and guru Jojo Isorena, and handled Alab for practice, but ended up adopting the shelter pup, who was soon followed by another mixed-breed rescue, Kahati. Feliciano eventually joined Better Dog as Isorena’s assistant.

While Kahati excelled in dog agility, Feliciano discovered Alab’s “calling” for obedience work. “I don’t believe in pushing square pegs into round holes. Obedience is his strength, so people started asking for him for commercials.” In Alab’s first TV ad, he crosses a street and is almost run over by a car. “He simply trusted that I was there across the street, waiting for him in the talahib,” Feliciano recounts.

Feliciano went on to become a certified dog trainer at the Karen Pryor Academy for Animal Training & Behavior in the United States, and is now the first and only certified Karen Pryor Training Partner in the Philippines, teaching clicker training to his students.

He is also a certified yoga teacher, a competitive underwater hockey player, travels occasionally to give talks on animal care and responsibility, and paints on the side.

Feliciano admits that, with his standards, working on a show stresses him out, but he’s all praises for the “Annie” company. “I feel like I’m working with them, not for them. It’s a real collaboration, and our director is willing to adjust to the dogs—he’s always asking what I need, what I want.”

The good news for him (although maybe not for any future productions) is that “Annie” may be Alab’s last gig. “I think this is the perfect retirement project for him,” Feliciano says. “He was always uptight, eating healthy; we used to do 10-kilometer runs. Now I want him to be a pet and not work, just walk in the park, chew on stuff, get rid of the pressure of being my dog!”

Alab, who turns 8 next March, loves eating boneless fried bangus, although a cheeseburger will do when he’s onstage. His favorite spot is at the feet of his lola, Feliciano’s mother, in her air-conditioned bedroom.

Although Feliciano has long gotten over his irritation at people who look down on asPins—“I don’t take it personally, and maybe that’s the extent of their understanding”—he acknowledges that Alab has helped put the breed, the shelter where he was born, Better Dog, and even Feliciano’s skills in the spotlight. “But more than the breed,  you really have to respect the individuality of the dog.”

Still, he does run into the occasional unenlightened human who will pet a purebred dog, but will say “Yuck” when an asPin walks through the halls of Resorts World Manila (yes, such jerks still exist). Feliciano simply smiles, even as Alab looks ready to fall asleep on his leg. “That’s why my job exists—to educate these people.”