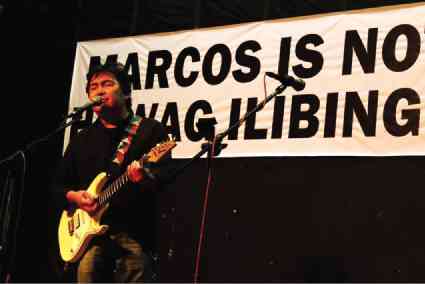 Chickoy Pura, lead singer and guitarist of The Jerks

Today, Sunday, is a fine time to hear good live music—whether out in the open park, or at an indoor venue.

This event, dubbed “Pray for Eight: A Prayer Concert,” is actually aimed to rattle the conscience of the Supreme Court, whose justices will vote on Nov. 8 to decide on the petition to stop President Duterte’s order to have the remains of the late President Ferdinand Marcos transferred from Batac, Ilocos Norte, to Libingan ng Mga Bayani (LNMB) in Fort Bonifacio.

Concert organizers are requesting everyone to wear white and join in storming the heavens for at least eight out of 15 SC justices to vote against the Marcos burial in LNMB.

While there will be fiery speeches on the issue, expect the music to invigorate your Sunday.

Perhaps it may even inspire you to appreciate more the beauty and depth of Filipino music.

We were told that a cozy setup awaits the crowd, meaning certain sections of the venue have been blocked off to allow the audience to have a better view of the stage and thus enjoy the show more.

TLC, originally composed of Tionne “T-Boz” Watkins, Lisa “Left Eye” Lopes and Rozonda “Chilli” Thomas, was formed in Atlanta, Georgia, in 1991. Following the death of Lopes in 2002, Watkins and Thomas carried on as a duo.

Four of its singles went to No. 1 on the Billboard charts, namely “Creep,” “Waterfalls,” “No Scrubs” and “Unpretty.”

Four of its singles—“Weak,” “Right Here/Human Nature,” “I’m So Into You” and “You’re the One”—became hits.

Nora Aunor is one of the judges at UNTV’s “A Song of Praise (Asop) Music Festival” Year 5 grand finals on Nov. 7 at Smart Araneta Coliseum.

Guest performer to showcase the past winning entries is “X-Factor UK” contender The 4th Impact and to render their own version of last year’s competing songs in a production number are Jason Dy, Michael Pangilinan, Liezel Garcia and the previous Best Interpreter Leah Patricio.

Twelve finalists are vying for Song of the Year, People’s Choice Award and Best Interpreter with over P1 million in prizes at stake.