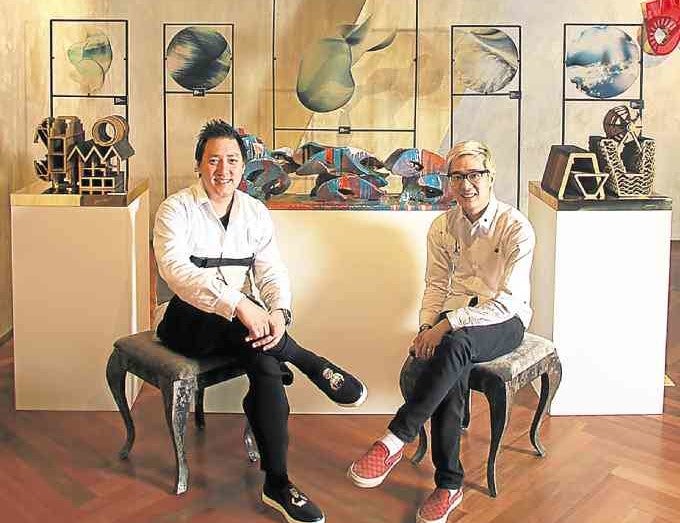 In their joint exhibit, architect Juan Carlo Calma and photographer José Benedict “Jay” Campos wear their hats as visual artists and redefine the meaning of “assemblage.” It is also the title of their show at Provenance Gallery in Shangri-La at the Fort.

By convention, an assemblage is either a planar composition or a three-dimensional construction using non-art or everyday objects.

Calma transforms the 3D computer-aided design used in his architectural projects into works of art. The exhibit includes maquettes, scale models of seemingly unfinished sculptures of futuristic houses and cities.

Made of laser-cut wood veneer, each maquette is a series of repeating geometric shapes that form interlocking spaces. He encourages viewers to use their imagination in interpreting the models.

One maquette reminds him of a mouse maze which is the layout of a house connected to a hamster wheel that is actually a vertical garden with a pool. Above the “house” is a cylindrical space which is a proposed lounge area.

“We always want to play around. We are pushing forward on what living is all about now, and all of that can be rearranged,” he says. In fact, he built a house where the driveway leads to the roof.

As an architect, Calma also incorporates feng shui symbols for good luck, love and marriage, prosperity, health and long life. Made of contorted wood, these abstract relieves will be placed in the homes according to the feng shui orientation.

Then there are bigger wall relieves that are Calma’s impressions of a modern city. One was inspired by the Vitra complex in Germany. His installation is an interplay of origami cut-outs in yellow, brown and pink.

“I love pink blush now, it’s neither feminine nor masculine,” he says.

Calma also pushes the boundaries of 3D printing by making objects such as a heart. It was his homage to the manual dexterity of artisans who sculpt and make papier maché animals in Paete, Laguna. He used digital printing technology which can make objects from a special layering process.

Since 3D printing uses thermoplastics and other sturdy materials, they could also be used in his architectural projects.

Calma collaborated with Campos on a sculpture which is viewed on a 360-degree angle. The “sculpture” is a horizontal series of interlocking terra-cotta whirls in mottled glazes.

“It looks like some kind of sunset or sunrise and that some butterfly just landed and stayed there,” he says.

Calma and Campos are opposites. While Calma is ebullient and expansive in his works, Campos is soft-spoken while his works are “compressed,” in the words of Calma.

Campos points out that since Calma studied at the California College of the Arts in San Francisco and Architectural Association School of Architecture in London, the architect/artist is more of a maximalist.

In contrast, Campos, who was influenced by the East Coast, is “ultra-minimalist.”

Campos is a familiar name in magazines for his photography. He studied Asian Identity in North America at the New Hampshire College.

A frequent traveler, he photographed clouds at different times of the day from the back seat of an airplane, and compressed their voluminous shapes on acrylic panels.

There is no Photoshop. Campos shows the colors and shapes of the clouds in their most authentic. They look like bursts of navy, orange, pink and yellow. To add visual depth, the clouds were printed on laser acrylic on metal frames.

He likes the aesthetics of clouds and their vastness. In all, he makes us see things that we often take for granted.

“I just started photographing clouds. It became ritualistic whenever I was traveling. It’s ironic that when people travel on planes, they are staring at their screens—never just looking outside to appreciate nature. To me, looking at clouds gives the feeling of being limitless,” says Campos. —CONTRIBUTED