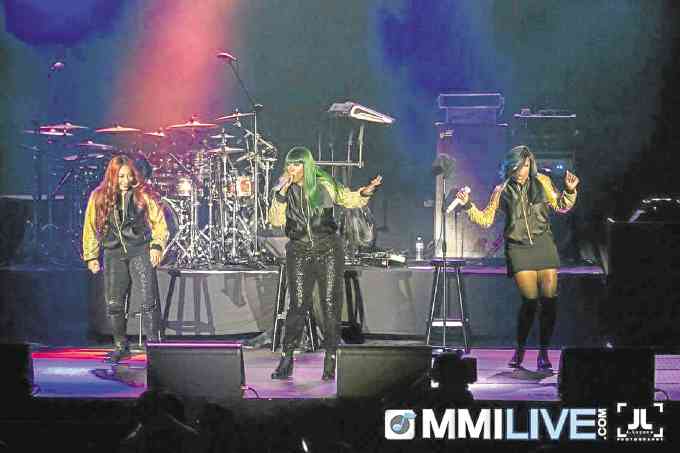 SISTERS WITH VOICES. Lelee, Coko and Taj of SWV sound as amazing as ever

Sporting sparkly jackets and bright hair dyes, Lelee, Coko and Taj of SWV showed that they still got their groove on as they sang and sashayed in sync to R&B staples “I’m So Into You” and a medley beginning with the indefatigable feel-good ditty “Right Here.” They also performed singles from their new album, “Still.”

Feisty red-haired Lelee wins with the most number of sassy quips and hugot lines of the night, lamenting her lack of a love life during “Ain’t No Man” and throwing shade at the tech booth people for cutting her off with the music while she’s still talking to the audience. Girl, we totally feel you.

If this radio hit doesn’t take you back to the glory days of “telebabad” conversations while listening to Magic 89.9’s Sunday Slowdown set, what would? The song might be called “Weak,” but the crowd’s singalong power was anything but. Forget Titas of Manila—the Big Dome was filled with the nostalgic sound of a thousand lovestruck teenage girls singing their hearts out to their high school crushes, and it was glorious.

Ripped denim, baggy pants and cropped tops made a huge comeback as T-Boz and Chilli of TLC brought out the “CrazySexyCool” ’90s vibe in full force, complete with a dance crew, band and masked emcee. T-Boz was the epitome of “Cool” with her signature low, raspy vocals while Chilli’s immortal abs and dance moves put the “S” in her “Sexy” moniker. The duo performed their early hip-hop/R&B hits like “Creep,” “What About Your Friends” and “Baby-Baby-Baby” with Left Eye’s recorded vocals filling in for the rap parts.

Fifteen years and a double negative later, the single ladies in the crowd clearly still want the same thing. TLC’s enduring ode to the “scrub,” the deadbeat  kuya  of the millennial “f*ckboy,” should be a good enough warning for young girls to steer clear of these types of guys. Too bad the group didn’t sing “Dear Lie.”

TLC gets down and dirty

Date night just got a bit hotter for the few couples in the audience when the duo turned the lights down low for the sensual single “Diggin’ On You.” ABS-CBN reporter MJ Felipe even got lucky and was treated to a special lap dance by Chilli onstage and a kiss from both ladies during “Red Light Special.”

What fans loved about TLC was that their songs also had messages of empowerment and self-love. After “Unpretty” got the audience waxing nostalgic about dealing with “ugly duckling” phases and mean girl bullies, T-Boz and Chilli asked the crowd to “light it up” for “Waterfalls,” their fallen sister’s favorite song and practically everyone’s anthem growing up.

We thought we’d forgotten the lyrics but surprised ourselves by singing the whole thing, down to Left Eye’s last rap line: “Believe in yourself—the rest is up to me and you.” Yup, this was our childhood—and hip-hop/R&B history, right here.