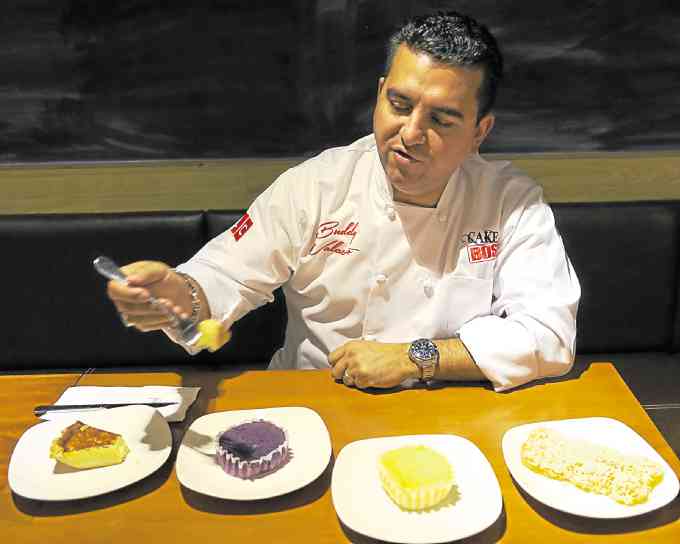 Cake talk with the Cake Boss

Bakers, bakers everywhere! The sweet and delectable truth is, so many people are into baking these days and quite a few have taken the big step and started their own cake or pastry business. A bake shop, however big or small, is a mean feat to aspire for—let alone accomplish. It takes more than flour, butter, eggs and a mixer; the recipe includes passion, talent, knowledge, artistry and a certain level of creativity, among other things. Sure, anyone who can follow a recipe and has the right ingredients and equipment could probably bake a cake, but perhaps only a handful could ever be as successful, inspiring and famous as Buddy Valastro.

Valastro is the no-nonsense, hands-on celebrity chef on the reality TV series “Cake Boss.” He is also the owner of Carlo’s Bake Shop in Hoboken, New Jersey, which his father started operating in the 1960s. His father, Bartolo or Buddy Sr., was also a baker and his number one idol.

The show, which sheds light on the everyday operations of Carlo’s Bake Shop,  started in 2009 and has become so phenomenal that it is now watched by 1.5 billion viewers in 220 countries, translated in 45 languages and is about to go on its eighth season.

The Cake Boss himself was in the Philippines last week, attending activities in line with the TLC Festival at Bonifacio Global City. Super was given the chance to interview the Cake Boss, who was every bit his passionate, straightforward yet amiable self in person as he is on television.

On only his second day in the country, Valastro, aside from tasting local delicacies, tried something truly unexpected—ride a tricycle! The photo of Valastro and his wife, Lisa, riding a tricycle even appeared on social media. With a hint of excitement in his eyes, he talks about the experience.

“As we were driving around the city  I said, ‘well what are those things,’ meaning the tricycles. So I said ‘I gotta take a ride in one!’ So my wife’s like, ‘you’re crazy, I don’t wanna get in one’ and I was, ‘no, let’s do it! So we squeezed in. It was tight in there, I gotta tell you! Definitely tight in there,” he says animatedly.

When the Cake Boss isn’t riding a tricycle or on tour, he tends to his cake shop most of the time. A typical day for him starts as early as 5 a.m., but no later than 7. He takes a shower, dresses up and goes to his bakery and tries to get there before everyone else does; he’s usually there before 7:30 a.m. That’s where he takes his first coffee of the day and collects his thoughts.

As someone with a strong sense of family, Valastro maintains the business with the help of his dedicated staff that comprises of a number of relatives, such as his sisters and their husbands, as well as cousins and family friends. Remember how they depict close family ties within and running the family business in “The Godfather”? The Valastros are of Italian heritage so it’s a little bit like that, except that there are no guns and no violence, just flour and mixers and cakes and pastries.

Despite his success, Valastro isn’t too concerned about competition. “It’s about putting out what I’m proud of, whether we’re the biggest or the best or whatever, it’s not about that for me. It’s about making what I feel is good and what makes me happy.”

While other kids were dreaming about being a doctor, policeman or maybe a fireman, Valastro always knew that he wanted to be a baker. He wanted to take after his father, who was already a baker himself by the time the younger Buddy was born. Buddy Jr., however, clarifies that his father never forced him to follow his footsteps.

The Cake Boss was only 15 when he realized that baking would become his lifelong passion and it was through cake decorating that he had the realization. He remembers spending a lot of time with and learning from his father.

On a serious note, he says, “When you make a cake, you go into like this zone, this world of creativity and you focus. You put your heart and soul into something. When you’re done you step out and you look at what you’ve created. And you’re like, ‘wow!’ It’s a feeling of self-worth. You feel good about yourself and that’s a feeling I want for the rest of my life. And that’s why I became a baker,” he adds.

He has, however, had his share of difficult clients but out of the many clients he has had; he claims that he has only turned down an order twice or thrice throughout his entire career. 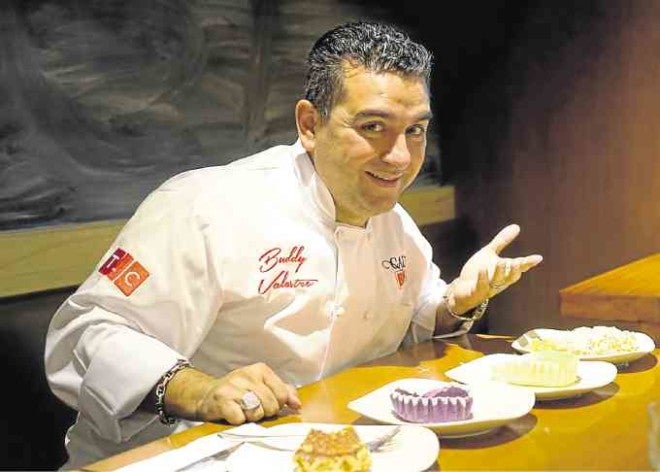 Being the Cake Boss is also fulfilling, but in a completely different way. Aside from feeling overjoyed about the show’s success,  Valastro also feels gratified knowing the positive impact of the show on its viewers and the feedback that fans have given. It’s not just about baking cakes anymore. “It inspires people to bake, to spend time with their family. It inspires people not to give up.”

The Cake Boss’ most challenging and favorite creation to date is the oversized Transformers Bumblebee cake, which Chevrolet commissioned him to make. It comprises of a Bumblebee in Autobot form straddling a yellow Camaro. It weighed approximately 2,000 pounds and took four days to make in a separate location. Bumblebee even had glowing eyes, movable wings and pyrotechnics.

Close family ties are obviously indispensable to Valastro. He also knows the value of sheer hard work, regardless of how small or big the task is. Again, there is the mention of his father as he explains, saying, “The values that are important to me are the values I learned from my dad. And I applied them and I think those values have helped me become the Cake Boss. I think it shows in how I live life and in what I do.”

He says:  “Believing in yourself, heart, never giving up and doing it the way you do it: from scratch, the old-fashioned way, your method, your style, who you are. But don’t be dumb to not want to learn new things.”

Among the four, the one he likes the most is the egg pie, also because of its sweet custard filling. He also said that the butter and ube mamon were good, and actually liked the purple yam after taste. While he said that the pichi-pichi wasn’t really bad, he admitted that he was least comfortable with its gel-like texture.  He claims that he isn’t too picky about food and is willing to try just about anything.