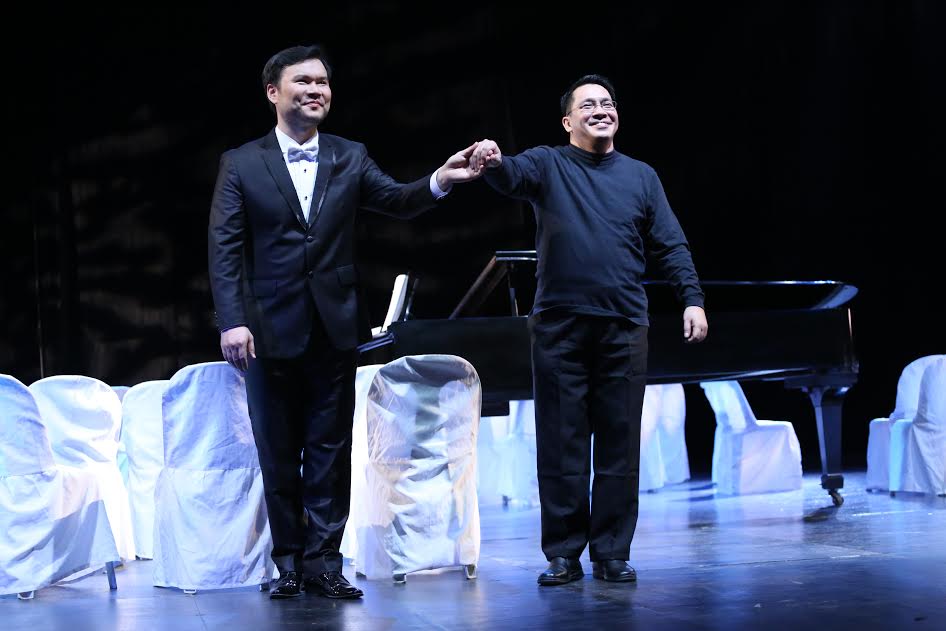 Schubert’s “Winterreise, ” or “Winter Journey,” is a song cycle about a young man who, rejected by his beloved, leaves the town in winter. The journey is told in 24 songs, divided into two sets of 12 songs each.

Indeed, it is a long journey, tedious, and sad—only a crow travels with the solitary wanderer who faces his fate with stoic resignation.

Presented by the Cultural Center of the Philippines, Clarion Chamber Ensemble, and 98.7 DZFE FM, baritone Byeong In Park sang the song cycle with vivid freshness in his debut recital at the CCP recently. Najib Ismail was at the piano.

The baritone’s “journey” lasted for an hour and a half and his performance was momentous! He started with a fresh voice and ended with the same quality, notwithstanding the demanding and draining emotive requirements of the songs.

At the outset, Byeong immediately distinguished one song from the other with fidelity to the import of each song. At once, one felt the song’s direct intensity, its affecting lyricism.

The different images used by the poet Wilhelm Muller fired the imagination of Schubert: “Frozen Tears,” “Wind Playing with the Weathervane,” “Linden Tree,” “Crow,” and “The Hurdy Gurdy Man.” Schubert himself lived a miserable life, contracted a disease and died when he was just 32 years old.

The appreciation of the song was greatly enhanced by the directing of veteran Jaime del Mundo and sensitive lighting by John Batalla. Del Mundo’s superb and agile reading of the poems translated into English before the singing greatly aided in the understanding of the texts that were also printed in the program.

On the first half, the baritone undertook his solitary journey. White chairs around the piano on stage defined a wintry landscape that perhaps could very well be interpreted as Schubert’s graveyard. The baritone wandered around the stage, singing his lines warmly. Projection was not a problem. His rich voice rang with brilliance wherever he was situated on stage. Del Mundo’s setting was a most welcome departure from the usual lieder-type or song-cycle rendition, in which the singer would just stand and sing by the piano. The audience felt the zeitgeist of the work that otherwise would have been merely suggested in conventional staging.

The beloved, played by Byeong’s real-life better-half, soprano Rachelle Gerodias, who’s pregnant, added a “twist” to the reading of the poems, as the baby, she said off stage, “is the poet’s!”

In the second set, the baritone stood by the piano and cut a charismatic presence. He delved on the poet’s “inner soul searching,” as Gerodias put it. There were minimum gestures. The singer defined well his center.

A man with his back facing the audience took the seat where Gerodias had sat on the first half. She said the man was the poet’s “doppelganger,” an apparition.

This writer thought Byeong’s voice would shed off some luster after doing the first 12 songs on the first part of the program. But intoning the first song, “Die Post” (The Post), he showed immediately his voice was gloriously intact.

Definitely his voice sported a sound technique, tightly schooled in the German tradition, perfect for the rendition of a song cycle. Top notes were brilliant and secure. The middle range was ravishing and the low notes had depth.

Ismail did a wonderful collaborative part. He was focused and played his part well, always conscious that his part must be as interesting as the melodic lines rendered by the baritone.

At once, he struck his fingers on the keyboard to set the mood, and imaginatively paint the imagery in convincing tones. Thus nature’s imagery came to life: the hurling wind, the storm, the birds’ singing.

The pianist did not compete with the baritone, but kept his lines in the same intensity, as in “Die Wetterfahne” (The Weathervane) in which the piano doubled the vocal line.

He kept the interplay between piano and vocal line, as in “Gefror ne Tranen” (Frozen Tears), singing marvelously his line to match the singer’s vocal line.

When the last song, “Der Leiermann” (The Hurdy-Gurdy Man), was performed, one felt a lump in the throat: Both singer and collaborative pianist, as in the previous songs and for the last time, had rendered fully Schubert’s poignant lyricism. —CONTRIBUTED