Cheer up! The windows are up | Inquirer Lifestyle ❮ ❯ 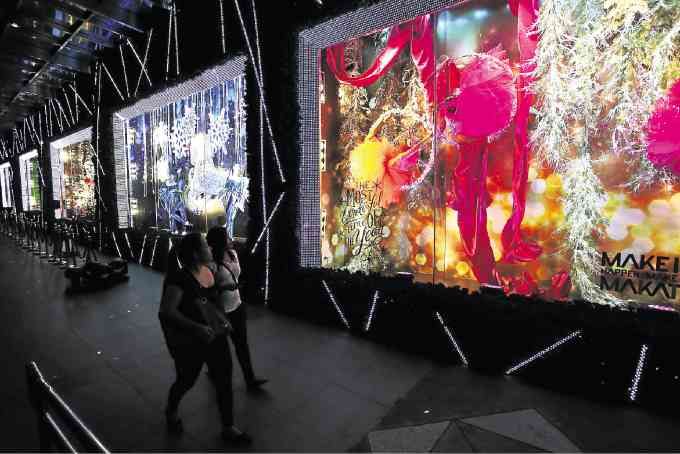 Cheer up! The windows are up

Motorists and passersby couldn’t help but whip out their camera phones when Rustan’s unveiled the bright and colorful display windows of its flagship store in Makati City last Wednesday night.

The windows burst with images.

In one intriguing window, female figures are wrapped in metallic ball-sashes (instead of fairy lights) in an apparent ode to Winona Ryder’s character Joyce Byers in “Stranger Things.”

The effect is hypnotic, like multiple 3D movie screens just a few feet away from moving traffic.

“We want people to feel a different Christmas every year—traditional, playful, whimsical, spiritual… When you come to our store, we want to be one of those happiest places in your life,” Rustan’s Commercial Corp. president Donnie Tantoco explained.

The windows effectively convey that message. A person who walks from one window to the next will eventually round the corner and find his way to the store’s red carpet entrance.

That night, Nutcracker-inspired ballerinas and life-sized toy soldiers waiting at the entrance offered candy canes to guests before they were led to the second level where a party awaited.

Tantoco described this dinner for lifestyle media as a celebration of Christmas and Thanksgiving. This Christmas media dinner has been a Rustan’s tradition.

“There are many reasons to be grateful… especially in this age of transition, turbulence and upheaval,” he said in his welcome remarks.  (It was a few hours before US Democratic presidential candidate Hillary Clinton conceded to the Republican Party’s Donald Trump.)

“We need a time like Christmas to celebrate the good in the world that we tend to overlook, like family, friends and God. Christmas is a time to reconnect with virtues and values in a world that builds goodwill, that unites rather than polarizes us,” Tantoco added.

The Rustan’s president credited his aunt, Rustan’s chair and CEO Nedy Tantoco, for organizing the dinner dubbed “Cosmopolitan Cuisine” with a white, gold and silver theme.

On the store’s second level, guests were ushered under a canopy of white-painted tree branches draped in gold and silver cloth.

Strips of fabric in gold and silver sequins were like chandeliers hanging above the long dinner tables.

White carnations, tulips, orchids and Casablanca lilies on the tables lent a touch of quiet elegance.

Written onstage was the evening’s mood: “It’s a wonderful time of the year!” Hopefully, this Rustan’s theme will stretch into the rest of the season.

As a surprise—and who could have thought of this classic idea, but only Nedy Tantoco—balladeer Jose Mari Chan and his three grown children sang beautiful and uplifting Christmas carols just as guests finished their double chocolate dessert. To many Filipinos, Chan’s melodious voice singing “Christmas in Our Hearts” spells the start of the Christmas season.

Everyone joined the chorus of “Christmas In Our Hearts” during the finale.

Just as gifts from Rustan’s tell the story of the thought and love that come with each, “we seek to do our part to make the anticipation, the opening and the discovering of the gift to be as precious a moment as possible,” Tantoco added.