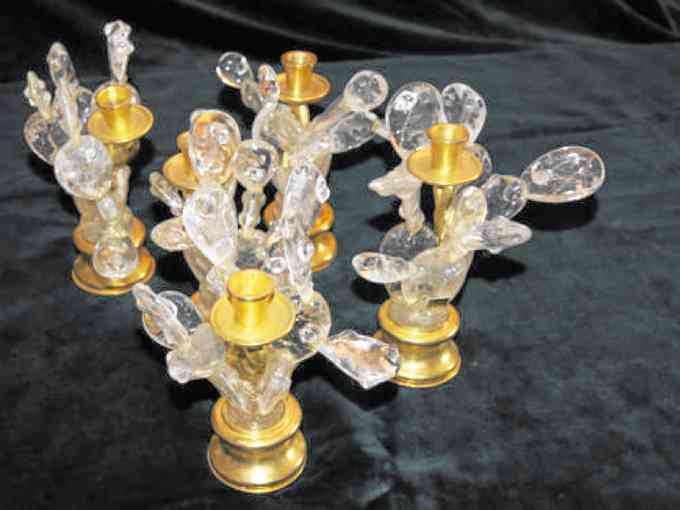 Princess Ira von Fürstenberg gets it: She knows that, at first, people are interested in her work because “they like to see [and meet a European aristocrat].”

But she’s also convinced her clients won’t part with good sums—and they are good sums, since, as she herself admits, her objects of curiosities are “very expensive”—if they don’t like her stuff.

The 76-year-old European socialite, and now designer-entrepreneur of jewelry and various pieces of giftware and curios, is in the Philippines this week, on one of her frequent visits, to meet up with the local artisans who create some of her pieces, collected by wealthy friends and clients and African heads of states.

She employs five to 10 artisans for up to six months at a time, to remount the carved rock crystal (quartz) pieces handmade for her in Madagascar, on designs she’s chosen. They’re typically animal shapes—elephants, leopards, stags, crocodiles—and even skulls and crucifixes, representing a balance between the macabre and the holy.

She demurs lightly when one refers to her work as art. “It’s assembling things, not art,” says the Rome-based aristocrat.

“What I like is that nobody else does what I do. It’s unique. I don’t duplicate. Maybe I’ll do them in different colors or sizes, maybe use different stones, but that’s it.”

Ten, 15 years ago—she can’t recall exactly—she traveled to     Nepal with a friend, and bought stones that she had made into tortoise shapes. She sold them, and they did very well. It gave her an idea.

If you go to the luxury brands, she says, they offer the same things. Wealthy people want objects that are special and unique.

Named after a paternal aunt and her maternal grandmother, Virginia Ira (pronounced ee-rah) Fürstenberg is descended from a long line of German aristocrats on her father’s side, and on her mother’s side, the Agnellis, the powerful Italian automakers and owners of Fiat.

Her brother, Prince Egon, was the first husband of fashion designer Diane von Fürstenberg. Her association with Prince Rainier of Monaco after his wife, the former Grace Kelly, died was much speculated on.

Fürstenberg has been coming here since the Marcos era, being a close friend of Imelda Marcos, whom she also met with on this trip.

She first came in 1979, a stop from an Australia trip, with Italian film director Giampaolo Lomi, who also accompanied her on this visit.

Fürstenberg was an actress in her heyday, a rival of Italian bombshell Gina Lollobrigida. She was part of the group that started the  Manila International Film Festival during the Marcos era. “Long story,” she says.

Through the former first lady, she met and became friends with Gliceria Tantoco, founder of Rustan’s. Zenaida Tantoco, Gliceria’s daughter and Rustan’s chair, is planning to show Fürstenberg’s pieces in an exhibit some time next year.

She used to work with galuchat (or shagreen, stingray leather) from Cebu, and is also considering Philippine mother of pearl.

It’s in exhibitions where she meets and sells to her clients, since she doesn’t have a store. She wants to change that with a planned brick-and-mortar London boutique.

She refuses to consign and prefers to move her things from city to city.

She’s also considering her friends’ suggestion of working with decorators. She gives pieces to charities for auction.

When she shows—she has done them in Ivory Coast, Mexico, Paris, Austria, Monaco —she does only about 40-50 pieces, because she doesn’t like to make them in large quantities, to keep her brand exclusive.

The decorative pieces are made of raw crystals and her favorite porphyry marble, a red colored rock that’s historically used in ancient Egyptian and Roman sculptures, giving Fürstenberg’s objects that added feel of pricelessness and rarity.

“We did a lot of parties” back in the day when she did PR for Valentino Garavani, Fürstenberg says. “I’m not so much interested in that anymore. It’s a show world now. That’s not anymore in my life.”

While she had no formal training in design, she thinks that “coming from a family of good taste” informed her creativity.

This aristocrat has been trying to break into the radar of affluent Asian cities. She hasn’t been to Bangkok, “where I lost my son.” (Her firstborn, nicknamed Kiko, died of massive organ failure in a prison in the Thai capital, where he was being kept after charges of altering his visa, in 2006. Only 49, he had just come from a Thai fat camp.)

At 76, Fürstenberg says she’s still motivated by the desire to be big. “I like the idea of getting there. It’s not [about] me, just the objects. I would like to be known worldwide. In Europe it’s easy. Asia is difficult. I hope to get there. In Hong Kong, you have to know the right people, I think. In Singapore, they say, it’s easier to get into society.”

And yes, maybe in the Philippines, too, she adds. “The Filipino people are very nice. You’re happy, friendly. You like music, and you have good taste and style. You’re a colorful people, much more than any other, I think.

“It makes me feel good when I go around and people go, ‘Oh, I like your things.’”

When she’s gone, she hopes people will see the value in her unique pieces.