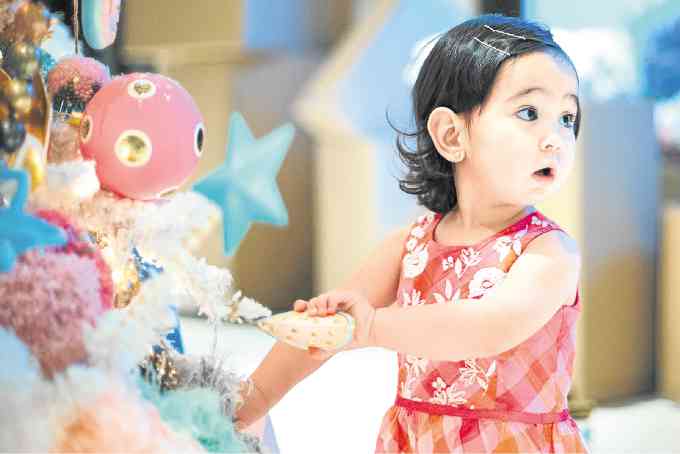 "If it's not something Scarlet can't touch, it's not going to be fun for her at all," says decorator Stephen Brown. —PHOTOS BY JILSON SECKLER TIU

Christmas in the Belo household last year had all the traditional holiday colors, decorated in “The Nutcracker’s” Sugar Plum Fairy theme.

But now that Dr. Vicki Belo’s younger daughter, Scarlet Snow, is old enough to appreciate the holiday season, the celebrity doctor opted for a more fantastical Christmas theme with her toddler in mind.

During Lifestyle’s visit in early September, American decorator Stephen Brown and his associate Bryan Crabtree were in the midst of setting up an unusually pastelish tree at the center of the Belo living room.

At the foot of the 10-ft-tall white tree were a large papier-mâché llama covered in white fur, atop a slice of pink watermelon, and paper-tree cones in patterned pastels and gold at the base.

“That’s part of it,” said Brown with a laugh. “Touching shouldn’t be completely forbidden. If it’s not something Scarlet can touch, it’s not going to be fun for her at all. At the same time, you don’t have to sacrifice and not put good things in the tree either. A tree doesn’t have to be child-proof.”

It’s possible to have a nice tree even in a house filled with small kids, he said. “A lot of things in this tree are soft and fuzzy. You want it to be child-friendly, and you also want it to be soft even for the adults. You don’t want a tree to be this hard, sticky thing. It asks to be touched.”

When decorating with a child in mind, he’s also against the usual green tree, as he finds it very dark and lacks that magical feel. The Belo Santa this year is dressed in traditional red but with large, gold-rimmed pink polka dots and bright pink gloves.

Brown—who worked on the O, The Oprah Magazine’s December 2016 cover, and whose stuff often lands on Oprah’s Favorite Things List, including this year—said Belo asked him to make something that’s “magical” and whimsical for Scarlet, ergo the “Lala Llama Land” theme. He was also responsible for the Belo tree last year.

The llama is a very popular theme in the US now, said Brown, and to push the kid’s fantasy even further, he wanted to add iconic tropical themes like pineapples and watermelons, but rendered in pastel shades and blown up to gigantic proportions.

Brown, a former film and TV costume designer, set up his company, Glitterville Studios, with a partner in 2003, providing giftware and decorating services to clients.

Many of Glitterville’s handmade crafts are made in the Philippines, and that’s how Brown met Belo’s older daughter, Cristalle Pitt, three years ago in Manila. (She messaged him on Instagram, telling him how she loved his work, and they met up for breakfast.)

Shortly after Brown returned to Tennessee, their home base, last year, Belo asked Brown if they could come back to the Philippines right away: She wanted to gift a tree to Manny Pacquiao.

“It’s a very lavish gift to give someone,” Brown said. “But we flew back with everything, flew to General Santos (Pacquiao’s hometown), set up the tree, flew back to Manila, had dinner with Vicki, and met Manny here. It was a whirlwind.”

Jinkee Pacquiao had seen Belo’s tree and said she wanted one just like it, such that putting it together was easy for the decorator.

Brown may have a very whimsical take on decorating, but he’s also a believer in recycling. Some elements of last year’s décor, he intended to reuse in other parts of the Belo household.

“Tree trends come and go. I don’t follow any,” he said. “I’m sure many here think Christmas is just red and green, which I always fight. Pink always replaces red in Glitterville. We follow our own style and we want it to be different. Decorating is putting something like watermelons and pineapples, and people say, ‘Wow, that tree has watermelons on it!’ If you make a red and gold tree, no one’s going to say, ‘Wow, that tree has red and gold balls on it!’”

Condo dwellers or those living in smaller spaces don’t have to be deprived of that holiday spirit when it comes to decorating, said Brown.

“It has the same principles, but think more cleverly, like opting for a tabletop or countertop tree. Or a corner tree,” he said.

“You can also hang a tree from the ceiling, so you’re just taking visual space at the top. If you really don’t have room for a tree, you can always use a garland, on which you can put anything.”

Down to a formula

On jobs such as the Belo’s, Brown typically works with just Crabtree, and they’ve gotten things down to a formula. All elements are shipped ahead.

“When you start a tree, you want to anchor anything that’s big in the tree immediately,” he said. “Here, the watermelons were put in first, then the pineapples, the large gems, everything goes in by size. When you have the big stuff in, you put the garlands and wrap around it. The process then becomes just hanging things in every crack you see. In parts where it looks like it’s not yet full, there will be little ornaments inside the tree.”

He has been asked, but if anyone here wants his services this year, Brown said, “I have time only for Vicki’s tree,” he said. “That’s how it is, even in the US. You don’t want to blanket yourself with too many people because you want it to be special. Clients don’t want their neighbors to have the same.”

Unless, of course, you’re Dr. Belo, and the “neighbor” is named Manny Pacquiao.