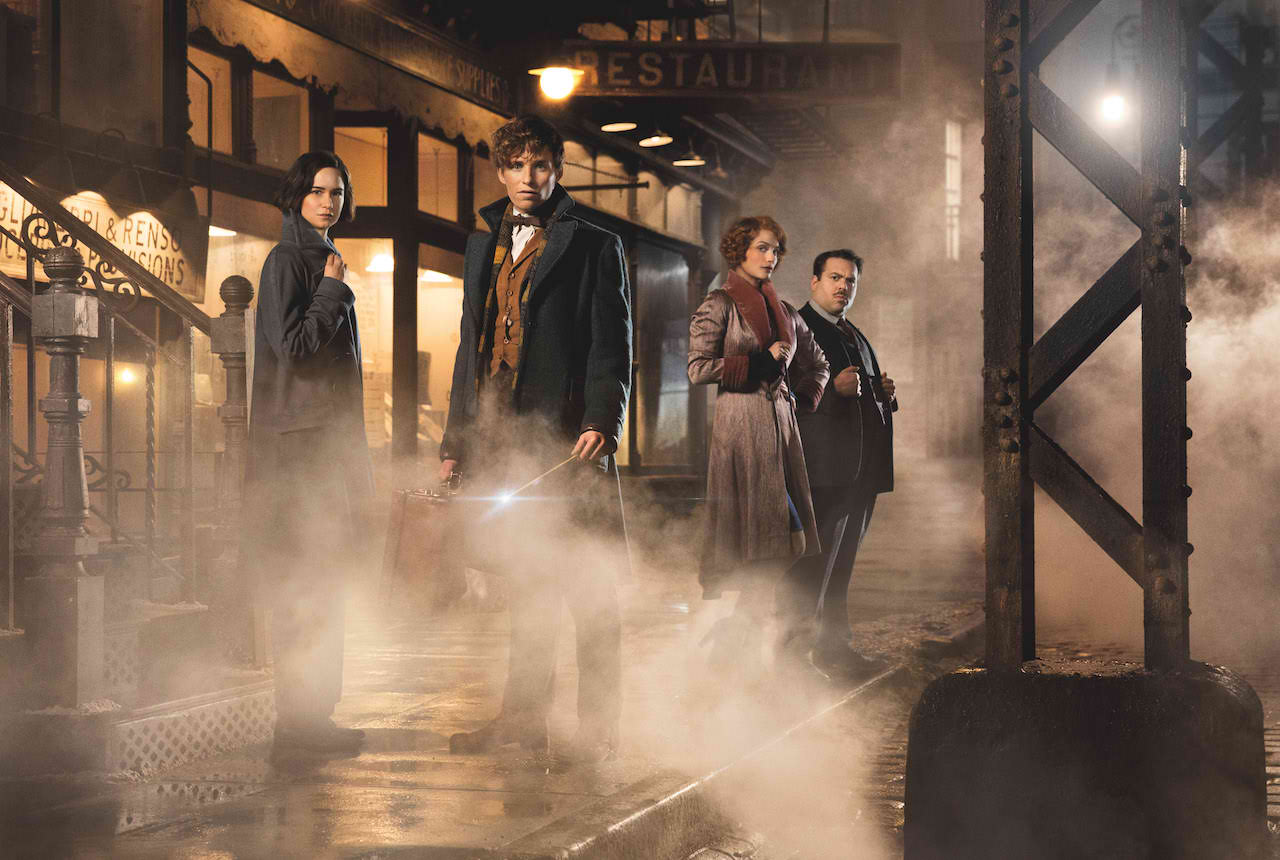 The breathtaking ‘Fantastic Beasts’ opens up a new world of magic for J.K. Rowling

IT is only fitting that, in the very first part of “Fantastic Beasts and Where to Find Them,” the first few bars of John Williams’ Harry Potter theme play into something completely different (James Newton Howard’s “Fantastic Beasts” theme), something familiar becoming something new.

It’s been five years since a Harry Potter movie (2011’s “Harry Potter and the Deathly Hallows Part 2”) apparated unto the screen. It’s been long enough.

In “Fantastic Beasts,” Newt Scamander (a charmingly frazzled Eddie Redmayne) and his special suitcase have come to New York in 1926 and must now track down escaped magical creatures. Through Scamander’s experience, we will discover the North American aspect of the Harry Potter mythos, including the MACUSA (Magical Congress of the United States of America, the Americans; cutthroat version of the Ministry of Magic) and the No-Majs (American Muggles). As Scamander tries to find the creatures with the help of aspiring auror Tina Goldstein (a determined Katherine Waterston), Tina’s sister Queenie (Alison Sudol) and bumbling No-Maj Jacob Kowalski (the affable Dan Fogler), he has to face down MACUSA’s security director Percival Graves (a glowering Colin Farrell) and perhaps something even worse running amuck in the city. Lurking on the fringes is an enigmatic man named Credence (Ezra Miller) and his magic-hating mother (Samantha Morton) as well as a magic-denying publisher (Jon Voight).

Scamander is ostensibly the Magizoologist (a zoologist who specializes in magical creatures) who was previously known only for authoring the “Fantastic Beasts” book and for his grandson Rolf Scamander eventually marrying kooky Harry Potter comrade Luna Lovegood.

He’ll be known for more than that. Redmayne plays Scamander as a heroic crooked man, all bright eyes and mumbling at the beginning, but later on displays a confidence that clearly marks Scamander as the franchise’s heart.

“Fantastic Beasts” represents an interesting meta-fictional corner of the Hogwarts universe. J.K. Rowling wrote the 2001 book the movie is based on as a straight-faced textbook for first-year Hogwarts students. With its sales benefiting the charity Comic Relief, “Fantastic Beasts” was exactly what its title says. It’s an encyclopedia (Acromantula to Yeti) of the various creatures Hogwarts students might encounter in the course of their studies. Originally released with another meta-fictional tome—“Quidditch Through the Ages” by Kennilworthy Whisp—the book is today available in “The Hogwarts Library,” a slip-cased hardcover three-pack along with “Quidditch” and 2007’s “The Tales of Beedle the Bard.”

With the original material’s quirky character making it unsuitable for a direct translation to the screen, “Fantastic Beasts” is instead kind of a distillation of the Pokemon Go game through the Hogwarts bestiary, with viewers discovering the different beasts as Scamander encounters them. In that sense, the movie is an almost completely different creature from the book—and thus an entirely new creation by Rowling.

That’s because this movie also marks Rowling’s screenwriting debut, as others—mostly Steve Kloves—adapted the books for the big screen. Here, Rowling essentially opens up an entirely new front in the Hogwarts world and she infuses “Fantastic Beasts” with the same wide-eyed discovery that the first Harry Potter movies boasted. She does just fine. Aside from the aforementioned beasts, there is a lot of exposition in the film, explaining the parameters of the new setting as well as the wizarding world’s underpinnings for viewers unfamiliar with Harry Potter (that would be a very small number of people, though).

In that sense, Rowling also has a lot of help. There are several Harry Potter alumni involved in “Fantastic Beasts,” but there is no more important past collaborator than director David Yates. Yates was a relatively obscure TV director when he was chosen to direct 2007’s “Harry Potter and the Order of the Phoenix.” Not only did he develop a distinctive style for the Harry Potter films, he would go on to direct all the three other remaining Harry Potter films, four out of the eight in all (he’s still using the color saturation here). He is the definitive Harry Potter director, and the right person to helm the next step in the franchise’s evolution. He employs a much more sophisticated arsenal in bringing “Fantastic Beasts” to the screen, notably going up and down the speed dial, alternating dramatic beats and going a little mad with the camera’s directions.

“Fantastic Beasts” winds up discussing some interesting elements in this setting, such as the more prominent discrimination against the No-Majs and the ban against owning magical creatures. The period New York setting gives it grit, but it remains a relatively nimble, light movie, especially when compared with Yates’ later Potter films. There are some genuine surprises here in the right places and some excellent character interplay, notably between Redmayne and Fogler, as well as Farrell and Miller. Fogler is the crowd-pleasing everyman in all of this.

The film does spend a lot of time reveling in the CGI-heavy titular beasts. The Niffler is funny, Pickett the Bowtruckle is adorable and Frank the Thunderbird is majestic. Beyond the beasties, “Fantastic Beasts” is important because not only is it the continuation of the Harry Potter movie series, but it is also the commencing act of its own five-movie series. The fact “Fantastic Beasts” works is testament to the sheer brilliance of the wizarding world that Rowling first unleashed on readers in 1997. Narratively speaking, it is clearly a new beginning for the series, as well as a proper origin story for Scamander; he is clearly the new Harry, and viewers will most likely find out more about his past in the future installments.

Perhaps the biggest treat of “Fantastic Beasts” is its seamless, breathtaking portrayal of magic in this universe outside of school and students. This is how grown-ups use magic. There is a sense of authenticity and, at the same time, otherworldliness to how magic is wielded in Rowling’s “real” world, a.k.a, beyond Hogwarts. “Fantastic Beasts and Where to Find Them” is a welcome window into the new world of magic that J.K. Rowling has hewn from the beloved old one.

Warner Bros.’ “Fantastic Beasts and Where to Find Them” is now showing in cinemas.