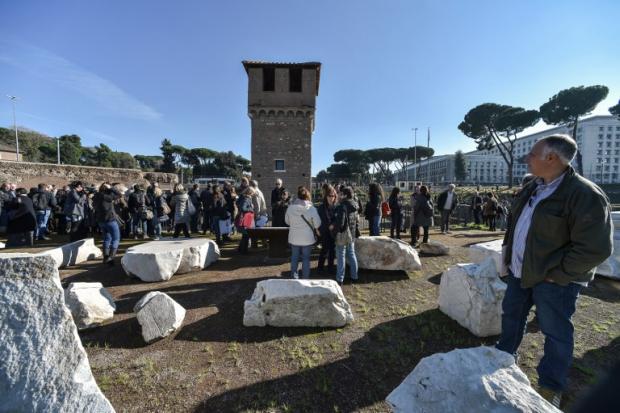 People stand near the Medieval Torre della Moletta during a press preview of the ancient Circus Maximus archaeological site after its restoration and its opening to the public, on Wednesday, Nov. 16, 2016 in Rome. Since Royal Roman Age, any kind of public events have taken place at Circus Maximus: horses races, hunting with exotic animals, theatrical performances, public executions, religious or triumphal processions. —ANDREAS SOLARO/AFP

ROME, Italy — A section of Rome’s Circus Maximus, the ancient venue for chariot racing, will be reopened to the public Thursday after seven years of renovation.

The long-awaited move comes amid mounting concerns about how the Eternal City can protect its unrivaled collection of churches, fountains and other historic landmarks.

The issue has been catapulted to the top of new mayor Virginia Raggi’s agenda after one of the city’s most famous pieces of public sculpture, Bernini’s Elephant and Obelisk, was vandalized earlier this week.

Raggi, a member of the populist Five Star Movement, said she could not envisage works like Bernini’s elephant being put behind barriers.

“But we have to put better surveillance in place and try to promote a greater sense of civic responsibility,” she said at the inauguration ceremony for the renovated Circus Maximus.

“It is important to have give such a beautiful spot back to the city,” she said of the renovated section.

Some 600 meters long and 140 meters wide, the Circus Maximus was a place where the elite of ancient Rome came to relax, mingle with the masses and put aside political differences, according to Marialetizia Buonfiglio, the archaeologist who oversaw the renovation.

Races between the Reds and the Blues thrilled the crowds of a population that, in the words of the satirical poet Juvenal, needed only “bread and circuses” to keep them happy.

Long abandoned after the fall of Rome, the area became a residential neighbourhood known as La Moletta but was cleared of its inhabitants under the regime of Fascist dictator Benito Mussolini in the 1930s.

Only the northwest part of the original circus has been restored with the bulk of it still underground, said Buonfiglio, who hopes it all might see the light again one day.

Bernini’s elephant, located in the Piazza della Minerva near the Pantheon, had part of one of its tusks broken off in the early hours of Monday.

Police have not yet been able to establish how the damage occurred but believe it was either deliberately broken off or was damaged during a late-night game of football.

Gian Lorenzo Bernini oversaw the sculpture of the pachyderm under a commission from 17th Century pope Alexander VII to provide a support for a recently-discovered ancient Egyptian obelisk.

The damage to the elephant comes after fans of Dutch football club Feyenoord caused outrage in February 2015 by damaging a Bernini fountain that stands at the bottom of Rome’s fabled Spanish Steps.

The Steps themselves were recently the subject of a debate as to whether they should be locked up at night following their recent renovation.

Thousands of residents and visitors sit on the steps every evening and some leave reminders of their presence in the form of beer bottles, chewing gum and graffiti.