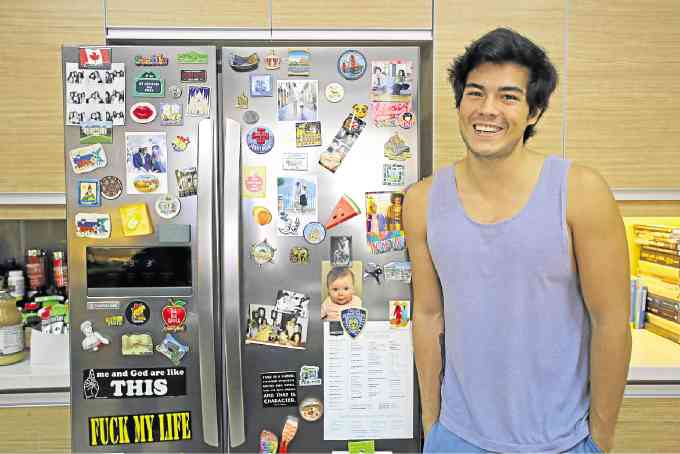 Souvenir magnets from the countries he visited, photos and stickers cover most part of the doors. But looks can be deceiving, and when he insisted that we open it, we found that his two-door refrigerator was the entrance to gastronomical Narnia.

Most of the items in the celebrity cook’s fridge are flown in from different countries—all misos are from Tokyo, hams are from Italy, and all alcohol bottles (which he keeps in a separate fridge) cannot be bought in the country.

“It’s not a very clean [fridge]. We had a big dinner [last night] so that’s why it’s like this,” Erwan said.

We were expecting the fridge to be staged, neatly stacked and free of leftovers. But the food wardrobe turned out to be as candid as the “Overnight” host, who was dressed in a muscle tee and shorts. And let’s be honest, staging is really unnecessary (we’re still talking about the fridge, winky face). 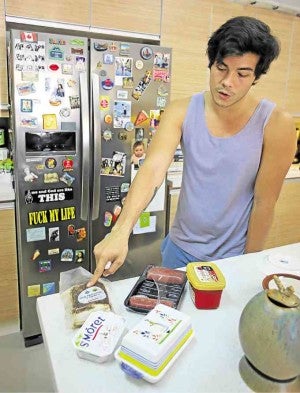 You won’t find Erwan cruising the aisles of your neighborhood supermarket, probably not even gourmet shops. He orders meat by the bulk (around 15 kilos) from his suppliers, and he spends a day butchering and proportioning them before depositing it in the fridge.

“I can order better ingredients. For example, the meat you can find in different supermarkets, it’s OK, but it’s not the best of the best. I order everything straight from my restaurant suppliers. It’s cheaper also,” he said.

There’s almost no space in between Erwan’s refrigerated goods. On its top right compartment, however, most of his favorite ingredients are placed together and can easily be reached.

And his fridge favorites make a whole lot of sense for someone who likes to keep his cooking as simple as possible. Erwan’s picks often “add amazing flavor” and keep things from “being too boring.” 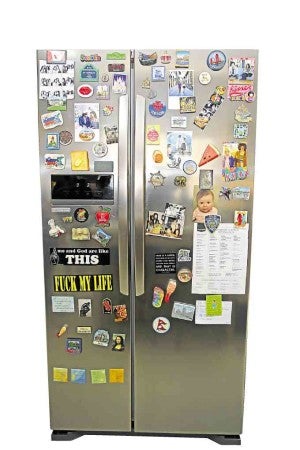 He often mixes the gochujang, a mixed paste of red chili, glutinous rice and fermented soybean, with soba noodles. The night before our ref raid, he shared that he cooked gochujang with Korean buckwheat noodles and pickled yellow radish, with tofu seasoning, green tea powder and seaweed powder adding magic into his beef bone broth.

Lardo keeps his greens a little more interesting, adding a more natural smokey and bacon-like taste to vegetables. Erwan says he also uses the Italian cured back fat as a starter when he grills steaks.

And as we mentioned some protein, Erwan also makes sure to add more and more of it in his diet. The tuna fillets when sliced thinly easily become snacks or poke bowl ingredient.

The guy also loves his bread and butter. He quickly quips—with no guilt in his voice—he can eat the Hokkaido butter on its own with a spoon.

“St Môret is the typical French cream cheese that you can’t find everywhere else but France. It’s like six times better than Philadelphia cream cheese and it tastes more natural. So each time I go to any country, I buy in bulk any of these things and then bring it in.”

He does a lot of grocery shopping for when he’s traveling, so much so that he allots 10 kilos of baggage for food and drinks alone.

“Ten kilos isn’t really that much cause you can’t put in that many. Imagine one bottle of alcohol is already a kilo. So if it’s really anything ridiculous, then I’d get a balikbayan box—but then you’re just impatient for like a month.”

But if he could stuff it all in his luggage, he’d be hoarding king crabs and massive scallops from the Sapporo airport in Hokkaido this winter. And a little more French cheese won’t hurt either. His top choices? Eppoise, an elusive soft cheese that “you can eat with a spoon.” And of course, there’s always going to be more room for wine.

We thought the last thing we would see in the fridge of a former 240-pound 21-year-old French-Filipino cook-turned-triathlete is unhealthy food. We were so wrong.

He held a vacuum-sealed bone and prime rib and said: “Usually you have a 1-inch thick prime rib, but this is 1.5 inches thick. It takes about two hours to cook in a grill, but when it comes out it’s just ridiculous. It has 30-percent fat, it’s a grade A4 wagyu.”

He also has vanilla-based ice cream (he hates chocolate-flavored ones) and some frozen dumplings.

“I love those but they’re so bad for you,” he added.

Erwan also showed us “The Graveyard,” a level in his mini fridge that stores different kinds of wine.

“Each time you do a dinner party, people bring the most random bottle of wine, so you’re left with 15 different kinds of bottles which is the most annoying thing ever. I’d rather have six or seven of the same wine,” he said.

Above the mini fridge is a distiller to make his own alcohol. He often used the device last year when he tinkered with cane sugar juice to make rum, which were “all failed attempts.”

With a fridge packed with international flavors and a kitchen filled with toys, being a guest at Erwan’s table is every foodie’s dream. His usual dishes for get-togethers are made from spicy raw fish, made into a tartare or tossed in a poke bowl, and a killer risotto, which he learned to cook since he was 12.

“I’d like to think everything I cook is foolproof. Every time I have a lot of people coming in, I do recipes that I can do in just a food processor, dishes you can make in bulk,” he said.

“I only cook the complicated ones when people come over,” Erwan added. “When it’s just me—like literally just me—I’m chopping up 200 grams of chicken breast and taking whatever vegetables I have and throwing that in a pan with salt, pepper, garlic. That’s it. I just stir-fry it just because it’s the simplest and takes me like five minutes and I can eat it in bulk—like I would literally eat that three times a day,” he shared.

While Erwan’s fridge embodies our ref goals—the perfect balance of healthy food and guilty pleasures—he’s still set on getting his hands on the mother of all refrigerators.

“My dream fridge is a walk-in fridge. Eventually when I build my own house. I need a walk-in freezer and a walk-in fridge because I order everything in bulk.” We’ll make sure to keep an eye out when he builds this dream fridge. Maybe we’ll find ourselves walking in a floo network with direct access to Hogsmeade (or maybe we’d get invited to a feast in his future Great Hall).