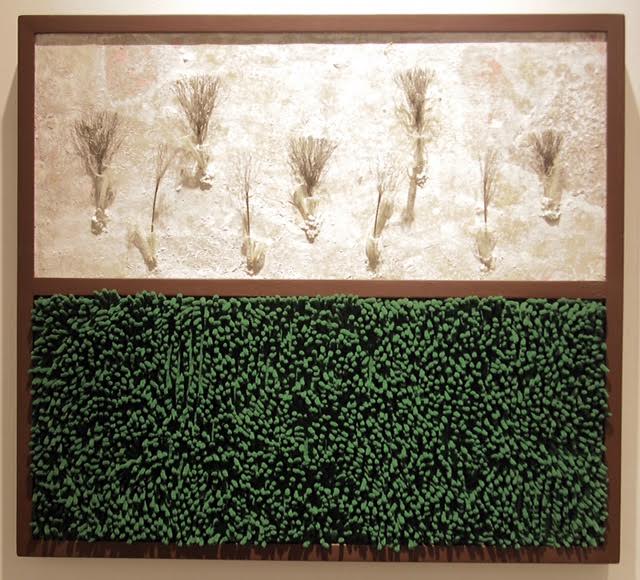 At first glance, one may think “Aligned 2: Imperfect Balance, Abstractions and Assemblages” is a solo exhibition of an artist who highlights nostalgia and fear using cement and raw industrial materials. But as one looks closely at the pieces, two different identities start to show.

Artists Pinggot Zulueta and Demosthenes Campos did not talk about what kind of works they’d be showing in their latest two-man show at Ayala Museum’s ArtistSpace in Makati City. During the ingress, they realized their pieces complemented one another.

“I did not visit him in his studio during the preparation of this show to see what he’d be exhibiting and it just happened that our works seemed to talk to each other,” said Zulueta.

Campos agreed, “I was relieved when I saw his works. It seemed that we planned the outcome but we did not.”

This is Zulueta and Campos’ second show together. Over a year ago, they collaborated on “Aligned” at Kaida Contemporary in Quezon City.

In that exhibit, lines were commonly found on their works. This time, the two use found objects and concrete mix. While Zulueta and Campos similarly tackle the theme of attachments, qualms and past experiences, both address different issues.

Zulueta’s “The King’s Throne,” a mixed-media work consisting of an old broken chair wrapped in a brown cloth, is a homage to his father and childhood memories of the artist, who hails from Paniqui, Tarlac.

“When I was doing this, I remembered my father because he used to sit down on this chair,” he said. “I was having this deep connection with the materials that I used.”

Most of the items used in his work came from Paniqui, which he rarely visits since the artist, also a photojournalist, shuttles between Manila and Sydney.

As someone who has worked for the print media all his life, he said he also could not help but express his fear of newspapers becoming extinct. He expressed this fear in “Lifeline”—three pieces of wood covered with New York Times nailed on a cemented background.

Meanwhile, Campos said in his new series he was seeking to express his anxieties over the impact of environmental developments on Philippine agriculture.

“I wanted to explore different materials but at the same time make a critique of climate change and what is happening to our farmers,” he said.

To showcase the different elements of nature such as the parched soils due to El Niño and its impact on crops, he used objects such as cement mixtures, rugs, plastics and stainless wires.

In “Abundance,” he divided his frame into two with the top half-embedded with wires that look like dying plants and the other half-covered with a green rug suggesting healthy greenery.

Campos said he wanted to continue his commentary on the environment from his previous solo exhibit, “And There Was Hope,” last August at Boston Gallery. —CONTRIBUTED