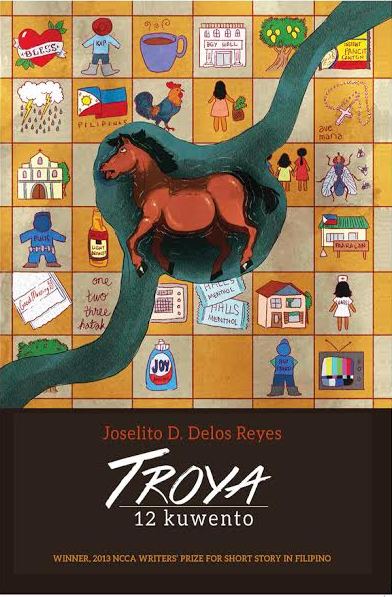 With his new book, “Troya” (Visprint, 2016), prolific writer Joselito Delos Reyes collects 12 familiar stories narrated by a unique voice in Filipino literature that gives readers the “natural” space to interpret, justify, or even contest the narratives.

As fictionist Eros Atalia writes in his introduction to the book, Delos Reyes does not hijack the emotions and intelligence of the reader. He does not dictate on what the reader should think and feel about the characters and their stories.

While “Troya” is only his first book of short stories, Delos Reyes has already been much acclaimed with two consecutive National Book Awards (2015 and 2016) for his essay collections.

For his poetry in Filipino he was named “Makata ng Taon” (2013) by the Komisyon ng Wikang Filipino.

This book of fiction is a result of his Writers Prize for Short Story in Filipino, a writing grant from the National Commission for Culture and the Arts in 2013.

The cover hints that the book is cerebral as it resembles chess patterns.

The title alludes to the Trojan horse, obvious from the image of a floating horse on the cover. A curious reader would directly go to the fifth narrative bearing the book’s title.

In the story, the characters find a horse. A dead one. It clogs Barangay Kaloob’s stream, causing problems. Then, the stories begin to orbit around the floating carcass. No one voice can be heard in the story-telling. The characters speak in “swardspeak” and “machospeak.”

One can also hear the voices of bystanders and politicians; even ambient noise can be heard. One may even smell the stench and feel the horse’s rotting innards on one’s skin.

These evocations of verisimilitude can only be captured by a writer’s firm grasp of language as a result of his deep social immersion.

Aside from his voice, quiet since he lets his characters tell the stories from their points of view, Delos Reyes employs literary devices that have previously marked his poems. He uses equivocation to let readers interpret further the text, this time, in another genre.

In this story, the term is “Troya,” generally known as betrayal sugarcoated as a gift. He sustains the metaphor by naming the barangay “Kaloob,” which can either mean gift or something related to a motive.

These are but Delos Reyes’ invitation to the reader to look into the minds of the characters and see for oneself through their eyes. The resolution will depend on whose character’s eyes the reader is using to see through the entire narrative.

The same feeling permeates the whole collection: the feeling of reality. These stories are so close to the narratives of the Filipino that identification with certain characters is almost immediate.

The book’s magic, however, is that even if the stories are familiar, they will still leave one asking questions after each ending.

Filipinos’ penchant for gambling such as lotto and cockfight is featured in “Bethany,” “Barangay Pinagpala Namin,” “Derby.”

Delos Reyes sets these in the flood-prone cities of Caloocan, Malabon, Navotas and Valenzuela, collectively known as Camanava.

The other stories are “Field Trip,” “City ni Dayun,” “Radyo,” “Monumento ni Sarhento,” “Ang Mga Beterano,” “Hbd,” “Videoke” and the tale which perhaps would make one rethink his image of an educator, “Teachers’ Camp.”

“Troya” is better in eliciting questions than in closing narratives. As Atalia puts it, this kind of stories and the voice of Delos Reyes need to discover their way into classroom discussions so that students may learn to look beyond the stories they read. —CONTRIBUTED

“Troya” will be launched in Conspiracy Café, Quezon City on Nov. 22.