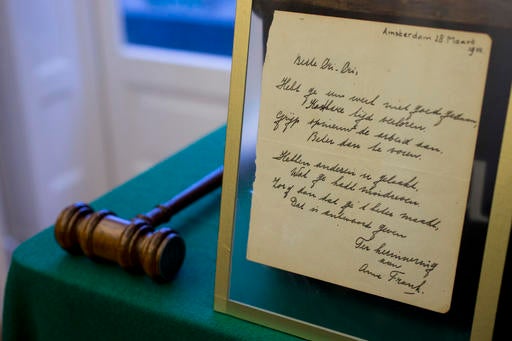 A short poem by Anne Frank, handwritten and dated in Amsterdam on March 28, 1942, is displayed at Bubb Kuyper auction house prior to the auction in Haarlem, Netherlands, Wednesday, Nov. 23, 2016. AP

Handwritten poem signed by Anne Frank to be auctioned

HAARLEM, Netherlands — A rare handwritten poem signed by Anne Frank is expected to sell for thousands of euros (dollars) when it is auctioned Wednesday in the Netherlands.

The eight-line poem, half of which was copied from a Dutch book of verse, is dated March 28, 1942, shortly before Anne and her family went into hiding from the Netherlands’ wartime Nazi occupiers in a secret apartment in an Amsterdam canal house.

The poem is accompanied by a letter of authenticity from the seller, Anne’s former school friend Jacqueline van Maarsen. The poem is addressed to Van Maarsen’s late sister, Christiane.

Maatje Mostart, a spokeswoman of the Anne Frank Foundation, said there is no doubt about the poem’s authenticity.

“Jacqueline was an important person for Anne,” Mostart said. “She decided to auction it.”

Mostart said it is “very special” for a piece of Anne’s handwriting to come up for auction.

Anne and her family were betrayed and captured late in the war and deported. Anne died in the Bergen-Belsen Nazi concentration camp at age 15, shortly before it was liberated by Allied forces.

She became a symbol for all Holocaust victims because of the diary she wrote while in hiding. Her father survived the war and published the diary, which went on to become a global best-seller. TVJ