Moana also means “ocean,” and the ocean animation is a visually stunning feat of technology.

Is Moana a Disney princess?” was a question that we kept hearing during an advanced screening of the film.

Disney’s latest animated flick, “Moana” focuses on Polynesian culture and folklore. The female titular character is a teenager tasked with taking over chieftain duties from her father, just as the island where their tribe lives suddenly dries up and their way of life is threatened.

Against the wishes of her father, Moana takes to the sea to find Maui, a demigod whose careless actions set off a chain of events that led to the natural disasters threatening Moana and her tribe. It is during this journey that Moana discovers herself and the long-forgotten legacy that awaits her and her tribe.

A chieftain’s daughter is royalty, therefore it would be logical to conclude that Moana is a princess. Nope. In fact, even the movie takes a meta poke at this when demigod Maui (voiced by Dwayne Johnson) takes a look at Moana after she insists that she’s not a princess. “If you wear a dress and have an animal sidekick, you’re a princess.”

When asked outright about the princess title, producer Osnat Shurer replies indirectly, “Moana is a heroine.”

Moana ticks off a lot of firsts for Disney. It is their first venture into the people and cultures of Oceania. The filmmakers embarked on an immersive research expedition, traveling to Fiji, Samoa, Tahiti, and engaging with the local communities to learn as much as they can, from history, mythology, right down to tattoos and the symbols they represent in the culture.

To ensure they got the storytelling as accurate as possible, the team assembled a group of advisers collectively known as Oceanic Story Trust (OST)-anthropologists, educators, linguists, choreographers and more—who gave input to Disney’s creative team.

The female titular character is cut from a different cloth from Disney’s former leading ladies. The tribe in which she was raised is not patriarchal; everyone openly acknowledges and respects Moana’s role as future chieftain.

It completely eschews romance. It is clear off the bat that Maui, while male, muscular, and spends most of his time stuck to Moana, is not, nor was ever meant to be a love interest. The only ship that sailed here is the one the two were riding.

The film also handpicked a first-timer to voice Moana: Auli’i Cravalho, a teenager as bubbly, bright and adventurous as Moana.  Cravalho did not actively audition for the role; the role was offered to her after the casting team saw a video of hers from a school performance. She won the role based on raw talent. It seems like a gamble, and yet, Auli’i turned out to be the perfect choice. The 15-year-old Hawaiian holds the Polynesian culture dear to her as well. “I never believed in fate before, but now I do,” says Auli’i with a laugh.

“Moana” is the first Disney film to feature music from “Hamilton” great Lin-Manuel Miranda and Opetaia Foa’i, founder and lead singer of Te Vaka. When you listen to the movie’s incredible soundtrack (available on Spotify), which blends Polynesian music, island beats, ’70s rock and R&B, you know that it’ll become not just another Disney classic, but one of Disney’s best musical moments.

The film already has a rich storyline, a powerful cast with standout performances (Dwayne Johnson’s deep, dulcet tones are a delight), and a killer soundtrack, but of course it doesn’t stop there. Even if you’re not a hardcore animation geek, you’ll be able to tell immediately that there is something special and technologically advanced in Moana.

While Moana is the name of the main character, the word also means “ocean,” and the ocean in the film is not just the backdrop where most of the action happens, it is also one of the key characters. Proprietary software was developed to create the waves and its interaction with objects around it, requiring complex mathematical equations to get the ebb, flow and splash just right. Another technical marvel in the film was the hair. Both Maui and Moana have great hair, but Maui’s curls have a life of their own (the secret to great curls is not mousse, but CGI), another technical achievement Disney perfected since “Tangled.”

“Moana” focuses on Polynesian culture, but there are a lot of elements in their culture that resonate with ours: a deep love for family, nature, the ocean and music. It’s a film that you’ll want to watch over and over again just to be able to soak in all the wonderful elements that make it a visually stunning adventure.

Make sure to watch “Moana” in 3D to get the full visual effect. “Moana” opens in cinemas nationwide on Nov. 30. 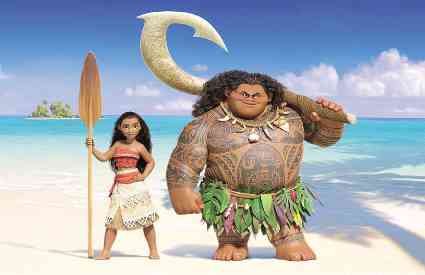