Ely Buendia on vinyl: The resurgence of that ‘70s sound

The epiphany came to me the moment the needle dropped on the first track of the record and that epic electric guitar riff came through the speakers.

For a moment, I was 14 again and hearing “Whole Lotta Love” off Led Zeppelin’s classic second album for the first time on a proper stereo system.

It was in a friend’s house. His parents were out, we had the house to ourselves, so we played the entire album at full volume. Twice.

The record that was playing now wasn’t “Led Zeppelin II,” but “Train Does Led Zeppelin II,” a track-by-track homage released last year by the hard rock group that was, frankly, not in the same league as the mighty Zep.

And, truth be told, that revelatory listening of “Whole Lotta Love” eons ago wasn’t really on a “proper stereo system,” but on a pretty crappy Radiowealth console—the kind you could buy at a furniture store back in the day.

It only sounded great because the only basis for comparison we had was a transistor radio.

Short-lived though it was, that moment of Zen did clarify a few things.

We have our most intense experiences early in life—first love, first sexual experience, first time we totally rock out—and we often spend the rest of our lives trying to recapture the feeling.

Audiophilia, the obsession with high-fidelity sound reproduction that afflicts many music enthusiasts, is a prime example of this pathology.

We were actually in a room at the Dusit Thani Hotel in Makati for the November Hifi Show, a much-awaited annual gathering of the audiophile tribes.

Part trade show, part swap meet and part listening party, the Hifi Show is a place where dealers can show and demo their wares, and where members of online audio forums can finally meet each other in person and geek out over high-end stereo equipment and hard-to-find albums.

The analogue renaissance is very much in evidence at the Hifi Show: vinyl LPs far outnumbered CDs in the listening rooms. In fact, if the music was digital, it was more likely to be streaming from Spotify rather than a compact disc player.

The busiest section of the show was a large hall in the mezzanine occupied by the record mart. Here, dealers in new and used vinyl had set up shop, and scores of music lovers were happily digging through crates of LPs, hoping to find that elusive gem.

One of the highlights of the event was the evening performance by Ely Buendia’s new soul group Apartel. Prior to the performance, Buendia and the other band members were available to autograph copies of their debut album “Inner Play,” which they chose to release as a limited-edition double LP, pressed in Japan on virgin vinyl in a limited run of 500 copies.

This was their first audiophile release, said Buendia, but it might not be their last. He hinted that vinyl pressings of his considerable back catalogue might be available in the near future. Audiophile fans have been clamoring for vinyl versions of the Eraserheads catalogue on social media and various audiophile fora.

Turntables also appeared to outnumber CD players in many of the listening rooms, a far cry from years past when digital still ruled.

The room we were listening to the “Train Does Led Zeppelin II” LP in belonged to the Audio Pilipinas online group, one of several local Internet forums devoted to audiophilia of various stripes.

The rig on which the album was playing represented an emerging trend toward vintage stereo equipment: a Technics SP-10 Mark III turntable, a Marantz PM-2500 stereo receiver and JBL-L20 speakers—state of the art maybe 35 years ago.

Not too long ago, you could still find vintage gear in flea markets and surplus shops at rock-bottom prices. Now they fetch exorbitant amounts on eBay, and there is a thriving trade in used equipment among local audiophiles.

These are encouraging signs of a growing diversity and democratization within local audiophile circles.

At their most extreme, audiophiles can fall prey to “equipment-itis,” focusing on gear to the detriment of the music. Part of the attraction, after all, is the snob appeal of being able to own and appreciate the best in music reproduction. 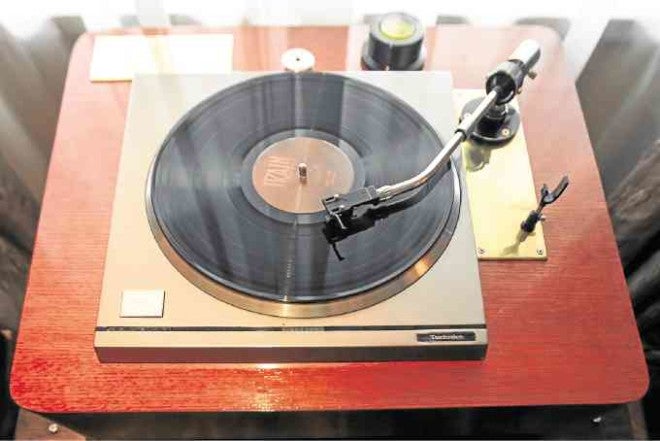 There, is, however, a downside. I’ve met audiophiles who have invested hundreds of thousands of pesos on their sound systems, but own only a handful of discs: the inevitable “Jazz at the Pawnshop,” a Telarc demo CD, maybe Eva Cassidy’s “Songbird.”

Thankfully, the pendulum seems to be swinging the other way, back to enjoyment of music.

“The emergence of audio forums has made being an audiophile fun again,” said Bobby Coloma, a member of the Audio Pilipinas Facebook group who flew in from his job in Singapore for the show. “It’s become a social thing.”

The online forum has helped create a real community, he added, where members can share information and resources, trade equipment and music, and indulge their shared passion.

“The most important thing to the group is the music,” says Reggie Halili, one of the moderators of the forum, which started only last April.

“Whether it’s analog or digital, whatever the format, it’s really the music,” he added.  “It just so happens that a lot of the members appreciate analog. There’s a sensibility, a certain level of practicality. Whether its tubes or solid state, however, the primary thing is the enjoyment of the music. Walang purists.”

Online groups and social media networks have also allowed its members to participate to a degree in the creation of the music that they love.

It’s no coincidence that the live entertainment for the Hifi Show was Apartel; both Buendia and Jay Ortega, his cohort in the funk’n’soul outfit, are audiophiles and active members of Audio Pilipinas.

In fact, some members of the forum were instrumental in the band’s decision to release their debut album, “Inner Play,” as a limited-edition, audiophile-quality double LP.

The forum acted as consultants in producing the album, says Halili. Members, some of whom are audio professionals, suggested that the records be cut at 45 r.p.m. instead of the usual 33 r.p.m., for increased dynamic range and better bass and treble response.

“This has something to do with the culture of the group,” he adds. “The group is very generous. The main thing is, OK, we enjoy music, let’s share it with others.”