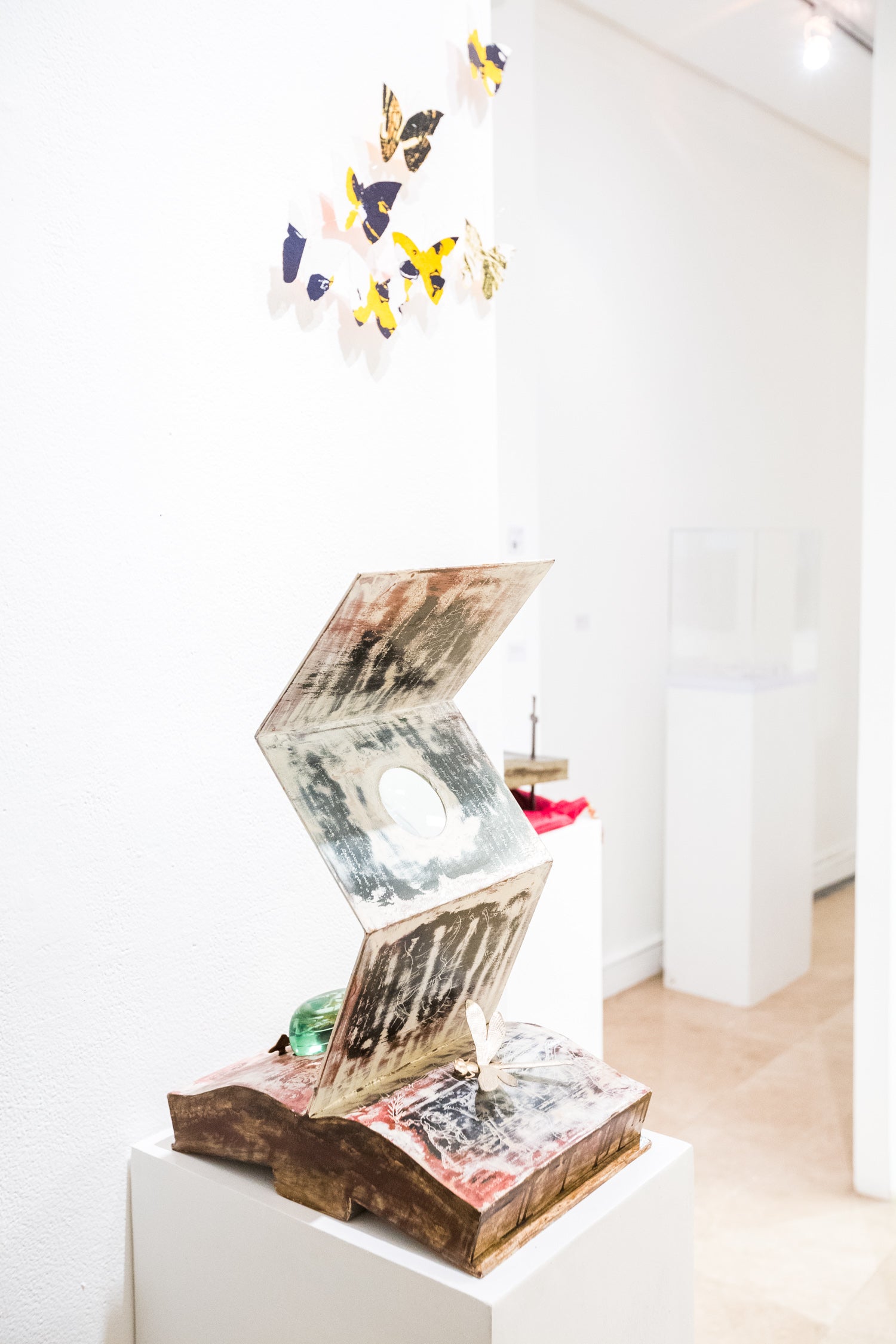 “Arachnida and Insecta,” by El Farol

Installations, sculptures mostly of metal and glass, and a few abstract pieces comprise “El Farol: Field Notes, 1980-2016,” at National Commission for Culture and the Arts Gallery (NCCA) in Intramuros.

The exhibit, which aims to present a comprehensive, unrestrained survey of El Farol’s work as a multimedia artist, finds a unifying theme in variety and disarray.

“In the span of three decades Noell El Farol has become one of the most versatile artists in the Philippines… The range of materials he has explored is as generous as his vocation to share his knowledge and artistic vision,” read the exhibition notes. “His body of work has the power to command attention brought about by the meditative mystical, vivid suave and enticing qualities of his art.”

Having studied advertising, art education, archeology and drafting technology in various institutions such as University of Santo Tomas, Philippine Women’s University and Technological University of the Philippines in Manila, and the Graduate School of Education of Shizuoka University in Japan, it only makes sense that the exhibit turned out a hodgepodge of styles, mediums and disciplines.

Thrown into the mix are various installations of bone sculptures-glass and porcelain shaped to resemble bones, that is, and actual specimens collected by the artist at various times in his career, making evident his anthropological leanings.

“Theory of Evidence Installation,” for instance, features an assortment of metal-framed objects, ranging from fish bone to a fingerprint etched on a petri dish to fingernail clippings in test tubes. The artist, too, showcases his collection of “stabilized fingerprints on glass slides” in “Software Series,” which took a year (2008-2009) to compile.

Glass sculptures and etched glass dominate the spread, with works resembling tiny houses. Inside the terrarium-like structures were mini ecosystems complete with glass reptiles and glass greenery. Others are more haunting than peculiar, like the “Death Mask” duo, where fused glass and metal formed distorted faces.

El Farol has jumped from one medium to another over the years.

“Disposable Anting-Anting,” a 1987 installation, features several rubber cut, wallet-sized anting-anting or talismans on handmade paper. A more recent work, “Zhang” (2009), appears to be a model of an ark made of constructed metal and rust.

“El Farol’s navigation for modest self-discovery as an experimental artist from his early beginnings to present makes him an ideal artist to be presented in a multidisciplinary institution such as the National Commission for Culture and the Arts,” the exhibition note further reads. —CONTRIBUTED