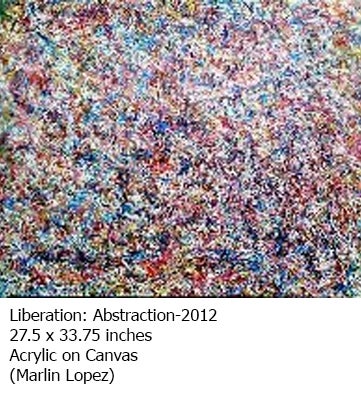 Mr. Marlin and his magic on canvas 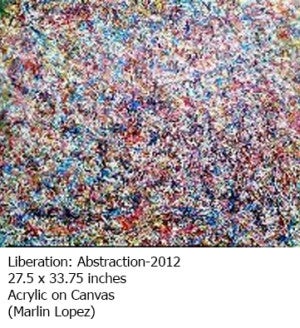 Spending hours, days or even months to finish an artwork may seem like an eternity or even a struggle for people who are not engaged in painting, sculpture, or any other form of art. Not in the case of Filipino visual artist Marlin Lopez.

A resident of Nueva Vizcaya, he has a lot to smile about these days particularly after figuring prominently in the 2015 Government Service Insurance System (GSIS) AAP Art Competition, a nationwide competition where he clinched Second Place in the Non-Representational Category.

Prior to winning the 2015 GSIS art competition, Marlin has exhibited his works and participated in art events in various venues in Nueva Vizcaya, and even launched a book entitled “Picture Your Heart”. In 2015, Marlin also landed in the ARTlead List (A-List) Highest Honors for the month of June (Non-Representational), July (Representational) and August (Non-Representational).

Dabbling mostly in oil acrylic, Marlin paints with a myriad of subjects in mind, ranging from a portrait of an angel, an illusion of distance, a Japanese garden, an illumination of darkness, or an escape, in whatever genre he desires. And just as interesting as his paintings are, so does his name, which is derived from the names of his father Martin and mother Erlinda.

A self-taught visual artist, Marlin delved in the visual arts at an early age. “At 11 years old,” he fondly recalls, “I started copying pictures on my note book cover through grid lines.” His fondness for drawing continued until his high-school days at St. Louis University until a teacher introduced him to painting, and where he made his first work as well.

Such dedication thus fueled Marlin’s artistic passion further, inspiring him to produce more paintings upon reaching tertiary education. At the Central Colleges of the Philippines in Quezon City, he not only engaged in engineering-related drawings, he also maintained his artistic zeal, exploring in works using oil colors while finishing his Bachelor of Science degree in Electronics and Communications Engineering.

Soon after he graduated in March 1999, Marlin was offered a job by a Japanese electronics company in Taguig City, though he preferred heading back home in Nueva Vizcaya instead, and opted to pursue a Bachelor of Laws degree at St. Mary’s University in Bayombong, Nueva Vizcaya in 2000.

At present, he works as Legal Assistant at the Ibarra Law Offices. “At that time I had plenty of time to paint and read,” Marlin gushes. “I read a book on humanities, in which I learned the history of visual arts but the problem was I still didn’t know how to apply oil colors in the canvas. I read articles on the internet on how to apply oil colors until I discovered acrylic colors which are more convenient to apply, and I do a lot of experimenting from impressions to abstract impressionism.”

Marlin derives his artistic inspirations from a gamut of sources such as personal experiences, sufferings, joys, or basking in adventures through nature particularly mountaineering and mountain biking, which he calls ‘visual exercises’. “Nature gives me many colors to appreciate, and to explore on each canvas,” he adds.

Aside from visualizing his solo nature trips, Marlin also turns to books for inspiration. “The books I read range from fiction to non-fiction,” he explains, “which are always my company when being alone always.” Now his central inspiration is his 8-year-old-daughter Marie Louise Elisabeth Sales Lopez. Other influences came from the brother of his grandfather, who is an artist weaver as well. “He taught me how to make bamboo rings for coconut string brooms (walis) and bamboo chicken nest when I was a child but not in visual arts.” 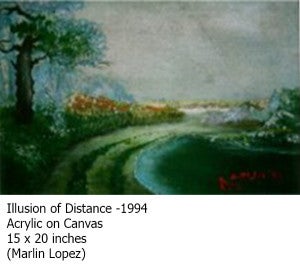 Among the foreign and local visual artists he admires, Marlin’s first and greatest influence is Vincent van Gogh, followed by Claude Monet, Manet, Picasso, Jackson Pollock, Willie Waycoco and James Magalued (a Nueva Vizcaya artist). “I only met James Magalued,” he remembers, “but the rest I got their ideas in books and articles about their works and events. They influence me a lot, I experiment with their styles. Sometimes I combine each of their styles. I may have failed a lot but mostly they motivate me to paint.”

If ever he feels any pressure in displaying his works in public, Marlin knows just how to handle the situation. “On my first exhibit I was very afraid to be criticized for exhibiting my work,” Marlin relates, “but as I read more about art I learned that art is a self-expression, which emanates from the vision of an artists and that time I was enlightened.” He admits getting stressed only when organizing and preparing an exhibit, but during the event, he’s glad and happy to share his art with the public or viewers.

Since 2012, Marlin has been conducting art appreciation workshops in schools, in the museum and in the house workshop through liberal arts, with or without knowledge in art. “It’s very fulfilling to teach young creative minds,” he proudly says. “To share is more creative. It’s not only the kids who are learning but I learned a lot about kids’ arts too, they amazed and kept me in improving my art.”

In Nueva Vizcaya, Marlin has judged in various art competitions, among them, On the Spot Painting and Charcoal Portrait, Installation Art, Lantern making, Mural Painting; Tagline, Jingle and Video clips, and On the Spot Poster Making. Likewise, he has conducted workshops on Art Appreciations Summer Kids, Private Art and Mathematics Tutorials, Summer Training Programs, and facilitated in Painting and Drawing activities. His other artistic undertakings include being a Technical Drawing Instructor at Cagayan Colleges Tuguegarao, and as a Freelance Teacher in Drawing and Acrylic Painting. 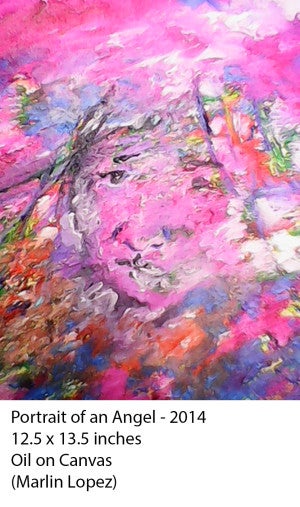 His vision is to create art in its simplest form, explore the foundation and the possibilities of art through self-continuing adherence in art, motivate young creative minds through art workshops, integrating art in nature’s mystery, adopting technological possibilities and to promote art through his Art Appreciations and Awareness Advocacy in all regions in the Philippines.

As a visual artist, Marlin feels strongly about his works being unique. “As far as I know, when I joined the GSIS Art Competition—upon viewing all the entries in the Non Representational Category, to my mind, my art is different because I sliced the colors through a palette knife to form a 2D effect, and I don’t know if there are any other visual artists similar to my style.”

Marlin’s second place finish in the GSIS art contest is a great accomplishment indeed, and it may give him the opportunity to know what it can do to help him succeed in future projects. “My experience in the GSIS AAP Art Competition Awards Night affects me a lot,” he says, “it motivates me most to create and advocate art and I hope the award will help in my advocacy towards art called Art Appreciations and Awareness in Nueva Vizcaya through workshops and art exhibits. Hopefully, I can share my art outside Nueva Vizcaya and outside the Philippines. I’m open to possibilities or opportunities.”

Anyone who wishes to pursue a career in visual arts can take this advice from Marlin. “Just express your vision humbly,” he quips, “follow the foundation of art and explore and innovate a new art style.”

For more details on Marlin Lopez and his works, contact via email ([email protected]).