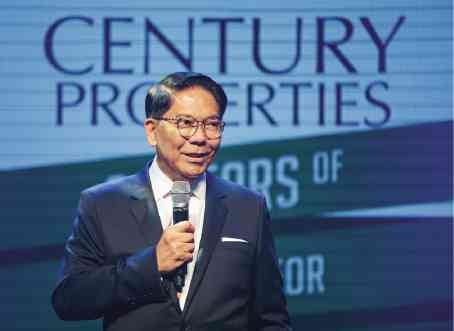 How Jose Antonio became one of Forbes’ richest

To celebrate what has turned out to be a milestone year for him, Jose E.B. Antonio, chairperson and CEO of Century Properties Group and special envoy to the US, hosted a grand party at the Makati Shangri-La.

The affair drew a power mix of guests from business, A-List society, the younger affluent set, most of whom are close friends of his sons, Jigger, Marco, Robbie and Carlo, who are also top executives of his real estate development company.

Behind these men is wife and mother, Gilda, who also has a formidable social network.

A series of videos showed Century Properties’ evolution and how it weathered challenges along the way.

In an interview with Inquirer Lifestyle, Antonio said the 1989 coup attempt, the power crisis in the early ’90s and the Asian financial crisis in 1997 put a damper on business.

“The lesson: Even in the best of times, one must always be conscious that there can be a black swan on the pond,” he said.

Then there was a video of President-elect Donald Trump expressing his pleasure in working with Century Properties. The footage was taken four years ago when Century Properties inked a licensing deal for the naming of the $150-million Trump Tower Manila.

Before he sang, actor and Century Properties brand ambassador Piolo Pascual said how happy he is living at Gramercy Residences, the country’s second tallest building, at 72 stories, at Century City, Poblacion, Makati. Pascual added that, for his son, Iñigo, he also acquired a condominium at Acqua Private Residences in Mandaluyong City.

The event marked the start of a new decade in Antonio’s life and for the 30-year-old publicly listed Century Properties Group. Antonio is worth $195 million and is ranked No. 40 among the top 50 richest Filipinos by Forbes magazine.

Asked how he became a self-made businessman, Antonio replied, “There was no manual or reference book. You have to follow your instincts, look at the best practices of people who have been successful; see what they did correctly or incorrectly. That will guide you in your journey.”

Antonio looks up to magnate Warren Buffet who made his millions through successful partnerships and investments. He also admires techies Mark Zuckerberg for his game-changing Facebook, and Brian Chesky, Joe Gebbia and Nathan Blecharczyk, founders of the online marketplace and homestay network Airbnb.

“They disrupted the industries to give clients a better product. Their new ideas changed people’s lives,” he said.

For his part, Antonio shook up the real estate market by selling an aspirational lifestyle to Filipinos and playing to their penchant for celebrities and branded names. Other developers have followed the marketing tack of promoting the amenities and the ambiance of their residential condominium projects.

Century Properties also distinguishes itself with unique concepts. One of the biggest sellers is the mid-price range project Azure Urban Resort Residences in Parañaque. It consists of a cluster of condominiums around a beach resort.

“The people are happy to have a manmade beach inside this development. No need to travel outside Metro Manila,” said Antonio, underscoring the importance of customer experience.

“A condo has four walls. What about the experience? A nice lobby, well-maintained surroundings, a good gym—all come into fusion when you live in one of our developments.”

Century Properties has since collaborated with branded names for its residential projects, such as Versace Home for the interiors of Milano Residences, Studio Daniel Libeskind and Armani/Casa for Century Spire, Philippe Starck for Acqua Private Residences, and hotel heiress Paris Hilton, who is designing the clubhouse of Azure Urban Resort Residences.

No conflict of interest

Antonio recently made news in the American press upon his appointment as special envoy to the US, this in spite of Century Properties’ business ties to the Trump Organization.

The New York Times wrote that Century Properties paid $5 million licensing rights for Trump Tower Manila in Century City. The NYTimes pointed out that President-elect Trump had no involvement at all with the project except to lend his name.

Bloomberg News reported that Antonio didn’t speak with Trump when the envoy visited New York after the US elections. However, he mentioned that he saw Trump meeting his appointees.

Antonio told Inquirer Lifestyle that he doesn’t see any conflicts of interest as a business partner and as a diplomat.

“Is it a crime that I know the president-elect? Is it odd that we have done business with his family?”

With units ranging from 60 to 400 square meters (and at over P300,000 per square meter) the 257-unit Trump Tower Manila is 94 percent sold with a total sales value of P6.13 billion. The branded luxury residential projects have been tapping the overseas market and affluent Filipinos.

While there seems to be a glut in condominiums, Antonio sees other opportunities. He cited that there is still a housing shortage in the affordable market, and office buildings enjoy 90-percent occupancy. The company is branching into tourism with upcoming resorts in Batulao, Batangas, and San Vicente, Palawan. —CONTRIBUTED