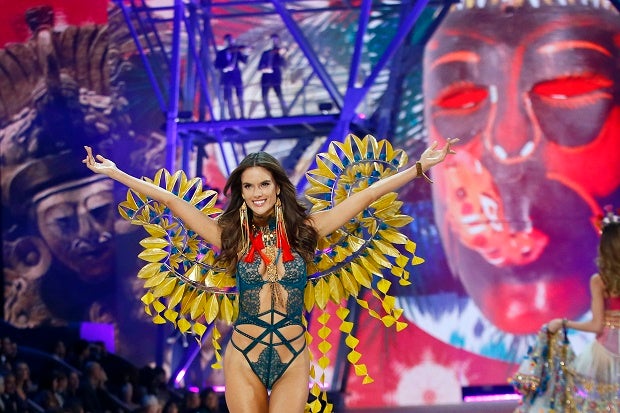 Model Alessandra Ambrosio displays a creation during the Victoria's Secret Fashion Show inside the Grand Palais, in Paris, Wednesday, Nov. 30, 2016. The pulse-quickening, celebrity-filled catwalk event of the year : the Victoria's Secret fashion show takes place in Paris with performances from Lady Gaga and Bruno Mars. AP

PARIS — The laciest, if not raciest, catwalk event of the year — aka, the Victoria’s Secret fashion show — took place Wednesday night in in the City of Light. Among the takeaways: performances by Lady Gaga and Bruno Mars, sisters Bella and Gigi Hadid joining forces, as well as a $3 million Fantasy bra modelled by Jasmine Tookes. Here are the highlights of the Paris show:

Guests shuffled into the huge steel-and-glass atrium of Paris’ Grand Palais to the sound of a string orchestra playing softly from a huge Arc de Triomphe decor.

The calm lasted only a few seconds, however, and was broken by the flash of red neon lights and bold rock music blasting out to announce the start of the 40-minute presentation, which infected the cheering guests.

Swedish model Elsa Hosk strutted out fittingly with electric energy in a cropped bustier — enveloped in a huge, three-dimensional red Chinese dragon; Kendall Jenner — in blood red — wore thigh-high boots, a long-line plunging bra and suede angel wing and Gigi Hadid looked like she would take off in flight, sporting a hand-painted cape with an Aztec-pattern that billowed as she walked.

“Not only do the wings get bigger but we tap into new artisans and people who do things with 3-D printing … that’s always the wonderful thing about working on the show,” said Victoria’s Secret Executive Producer Monica Mitro.

As the show ended, a million pieces of glittered ribbon fell on the angels and the adoring crowds.

With a retro bleached hairstyle, Lady Gaga gave a rousing and gutsy live performance of “Million Reasons” to the crowd, and appeared again for “A-YO.”

At one point her microphone got stuck in the tassels of her dark cowboy hat, but this didn’t stop the consummate professional, who continued singing “John Wayne” as Victoria’s Secret models danced with her and crisscrossed the runway rhythmically to the beat.

As the 30-year-old popstar ended her set, she walked over to kiss Hadid’s mother, reality TV star Yolanda Hadid, in her front row seat. (Before the show, Gaga treated her Instagram followers to a photo of herself in silver Victoria’s Secret underwear).

Bruno Mars also performed several times, ramping up the energy and using the catwalk as his stage — in signature shades, with tuxedo-wearing backing dancers jiving behind him.

The American singer had guests jumping up and down for funky performances of “24K Magic” and “Chunky.”

But it was perhaps The Weeknd that got the most cheers of the night. The singer serenaded Bella Hadid — with whom he has been romantically linked — with his hit song “Starboy,” and almost followed her up the catwalk as she walked in a lace gown with silk organza corset.

The Victoria’s Secret Fantasy bra the 25-year-old Jasmine Tookes was selected to wear is considered the piece de resistance of the brand’s runway display.

The bra, glimmering with thousands of gemstones, was presented like crown jewels ahead of the show. An incredible work of art, it was designed by Eddie Borgo and hand-crafted over 700 hours with gems from jeweler AWMouzannar.

“It is so beautiful. It’s covered in white diamonds and emeralds and it has about 9,000 gemstones. It cost $3 million — so stunning,” gushed Tookes backstage while she was having her hair done.

It’s the third time a black model has been chosen to model the Fantasy Bra.

Tookes said the garment was constructed on a mold of her upper body, literally made to measure.

While the bra may be perfect for the runway presentation, Tookes joked she probably wouldn’t want to go for a jog in it, given its weight.

“It’s very heavy; it weighs more than 450 karats. It weighs down on my shoulders a little bit, but it’s so worth it,” she said, cheekily adding: “I might jog out of this show with it though.”

Hadid, 52, was the proudest of mothers Wednesday night.

For the first time, the former model could boast that Bella was included in the Victoria’s Secret model line-up as well as Gigi for 2016.

“Last year, Gigi got it and Bella didn’t get it and I felt awkward being there having Bella at home. And this year, it’s just so perfect because they’re both here. We’re celebrating, the sisters together,” she told The AP.

The three posed for cameras and kissed on the pink carpet following the collection — in a show of family love.

“It’s all surreal. I mean, I came here when I was 16, modeling. So many years have gone by and to be here with both my girls.it’s emotional. I keep looking at them and pinching myself. Whoever thought that this would happen?” she added.

She was one of the original Victoria’s Secret models back in 1995.

Now at 51 years old — and just as youthful-looking — Veronica Webb spoke to the AP about the challenges and particularities of the famed fashion show that she began 21 years ago.

“I was in the first Victoria’s Secret show and it was one of the most challenging bookings that I ever did because, obviously, if you’re in a room and everyone else is dressed and you’re in your underwear it’s a little bit embarrassing,” she said, laughing.

Webb, who made history as the first African-American to ever have a cosmetics contract, also recalled how important the experience boosted her professional life.

“It was one of the proudest moments of my career also because it took so much discipline and making so many fitness goals to get there,” she said.

Even Victoria’s Secret models get nervous

Brazilian beauty Lais Ribeiro physically jumped when a loudspeaker bellowed there was just one hour until show time.

Ribeiro knows more than most about the hidden dangers in a show such as this, where models in towering heels can injure themselves. She hurt her foot as a Victoria’s Secret Angel three years ago.

“What am I scared of? I twisted my ankle and kind of broke my foot in the rehearsal three years ago. So I’m always scared of the high heels (that might make) me miss this amazing show,” she said.

Hours before Wednesday’s show began, hundreds of meters in the area around Paris’ Grand Palais and the Champs Elysées avenue were in near lock-down, barricaded with passing tourists and fashionistas alike getting frisked.

Bomb squad dogs sniffed out every single bag that entered the Grand Palais where the fashion show took place.

Paris remains in a state of emergency following last November’s Paris attacks at a concert hall and various spots around the capital.

The Angels, as Victoria’s Secret top models are known, have taken Paris — and their Instagram accounts — by storm since flying into the City of Light on Sunday night.

Led by Alessandra Ambrosio, the troupe posed for photos outside the Eiffel Tower on Tuesday morning as gob-smacked tourists stopped to take in the incredible views, which included the monument.

But the fun continued online, with Lima posting a from-behind shot of her and Martha Hunt wearing thigh-high boots during the show’s preparations.

Mere mortals may use a face mask ahead of a glamorous night out — but these are Angels, and terrestrial rules don’t apply.

Trending online were photos of some of the models using 24-karat gold sheet masks to prepare for the 2016 show.