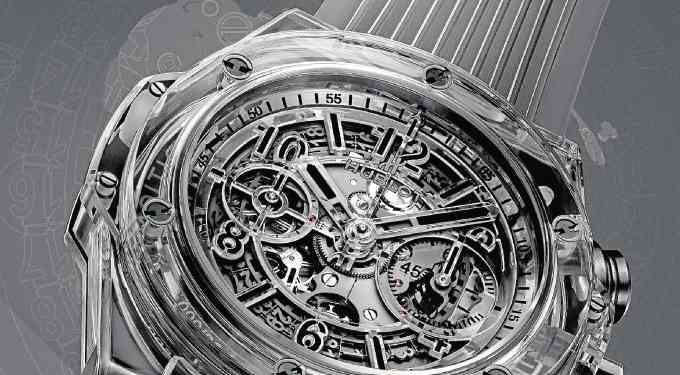 The watch brand that made black super cool innovates yet again

Hublot is not known for sticking to the rules. It’s known for exactly the opposite.

When you don’t have a centuries-old heritage backing your brand in the competitive world of luxury watchmaking, you stick to your guns, keep to who you are, and believe that the market will see just how you stand out from the traditional.

That has always been the philosophy of Swiss watchmaker Hublot, founded only in 1980, and ranked today among the world’s top luxury watchmakers.

When Hublot (pronounced YOO-blo) introduced the All Black watch in 2006, a revolutionary piece made with all-black elements, it pioneered a trend.

Ten years ago, luxury horologers were using only traditional materials and color-precious metals like gold, platinum and steel. Hublot thought of using high-tech black ceramic, a sturdy material used in various industries, from pottery to automotive.

In 1980, Hublot was the first luxury watch company to use rubber straps with a gold case—unthinkable in more traditional companies.

Since rubber is comfortable, hypoallergenic, flexible—and you can swim in it—celebrities and royals started wearing Hublot. They wore their Hublot on their yachts, while doing sports, for every day. Then   other brands jumped in on the bandwagon.

“To be different, to be unique, to be first—those are the only three rules we live by,” said Loic Biver, Hublot general manager for Greater China and Southeast Asia, at the recent celebration in Manila marking the 10th anniversary of the Hublot Big Bang All Black, and launch of the limited-edition Big Bang Unico Sapphire All Black.

“We don’t look at others, and we don’t do market research when we make a watch,” he added.

The 2016 edition is a fully updated version of the All Black, which has undergone many incarnations in the last 10 years. Apart from the cosmetic and design change—its construction and mechanical movements are seen fully in its transparent black smoked sapphire crystal case—Big Bang Unico Sapphire All Black now uses a 100-percent in-house manufactured and developed chronograph movement. It’s the first black sapphire watch in the market.

Sapphire crystal is a natural element that’s scratch-proof and can only be cut with diamond, but is difficult to manufacture, especially when cut in angles, Biver said. For this watch, the sapphire is coated with black metal and retains its transparent quality. (In the past, Hublot also created an 18k scratch-proof gold alloy that it christened Magic Gold and used in its watch models.)

“It’s Hublot’s biggest innovation this year,” said Biver, whose father, Jean-Claude, is a maverick in the luxury watch industry.

It was the older Biver who revived the brands Blancpain and Omega, and also did the same with Hublot when he took over as its CEO in 2004. Hublot was acquired by the luxury conglomerate LVMH in 2008. (Today, Jean-Claude Biver is chair of Hublot and president of LVMH Watch Division.)

Big Bang Unico Sapphire All Black took five years to develop, and has only 500 units, at about $50,000 apiece. It’s exclusively available from Lucerne Luxe in the Philippines.

Since Biver’s father revitalized the brand, Hublot’s innovations have been its edge in a market dominated by heritage watchmakers. In China, where many luxury watch brands suffered from the government’s crackdown on spending, Hublot was virtually unscathed.

“We entered the market only in 2011, just when the trend in watch preference in that market was also changing,” Biver said. “Ten years ago, in China, quality watch was supposed to be heavy and in gold. Today, just as in the rest of the world, it has to be light, made of high-tech materials, discreet, and features complicated movements. Traditional brands were affected by the crackdown because what they offered was what the Chinese liked 20, 30 years ago.”

It also helps to have the backing of a powerful conglomerate that also respects the brand’s independence, he said.

It’s the younger generation of consumers that makes up the Hublot customer base. While its core customer is between ages   25-40, it also attracts a much older bracket that wants “to look modern and live in the present,” the executive added.

“I’ve spent 10 years in China, and it’s so different now from 10 years ago,” he said. “Before they wanted logos everywhere. Now the market has matured just as everywhere else. They no longer go for something just because it’s expensive. People go for what they like, as in Southeast Asia, in the Philippines and Japan.”

Meant to be worn

And unlike most brands, Hublot watches are meant to be worn, not kept in one’s safe, he said.

“It’s a pity that some people feel that way about their watch, that they only bring it out and wear on special occasions because they’re afraid to damage it. I’ve had customers who come up to me and share their joy in being able to wear and enjoy their Hublot tourbillon on a daily basis and not having to worry about it getting scratched.”

Biver himself wears an older model of the All Black—his father’s gift on his 30th birthday.

“We will keep innovating and continue to develop new materials,” he said. “We do what we like. In the end, whether they like or not, we remain who we are.”